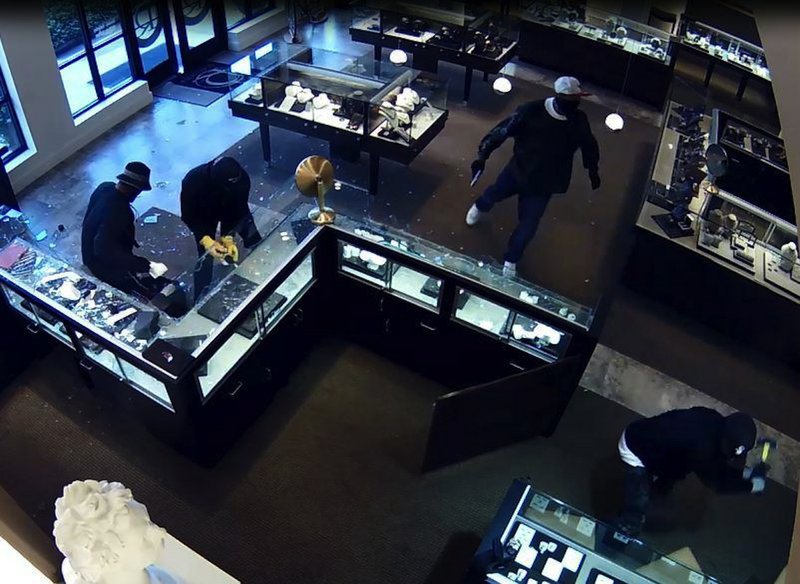 Surveillance video from the scene of an armed robbery Tuesday, Sept. 22, 2015, at Roberson's Fine Jewelry in Little Rock shows four of the five men connected to the crime. - Photo by LITTLE ROCK POLICE DEPARTMENT

Despite what seemed from the outside like a smoothly executed operation, the robbers later clashed over how to sell the stolen goods and divide the proceeds, and were even shot at by men who tried to rob them of the jewels, Gabriel said on the second day of the federal jury trial of Darris Denton and Quinshod Shaw. The Oklahoma men, facing charges of conspiring to interfere with commerce by robbery, are accused of being the gunmen.

Gabriel, an admitted veteran of jewelry store heists in several states -- including Texas, Nevada, Tennessee and North Carolina -- said he was the designated "grabber" who scooped about $300,000 worth of jewelry out of the store's diamond cases while the gunmen held back three employees and a customer, and the designated "smasher" used a hammer to break the glass cases.

Gabriel, who has pleaded guilty and agreed to cooperate with prosecutors, testified that he and the other three men, all wearing face coverings and hats, ran out of the store after just 50 seconds and then jumped into a stolen beige getaway truck that drove them to a "switch spot" behind the store. There, Gabriel said, his three accomplices climbed inside the cab of the "switch car," a black F-150 pickup. He jumped into bed of the truck, lifting up the bed cover to get under it. He said he remained in the covered bed with the knapsack containing "the goods" for several hours -- sweating profusely -- until the truck stopped a few hours later in Oklahoma.

Asked what his ride was like, he said, "Hot," and noted that he "wasn't happy."

Gabriel testified that when he emerged from the truck in the Oklahoma countryside, he handed the bag of jewelry to the others and got into a Mercedes that had also been waiting in the "switch spot" behind the Pleasant Ridge shopping center, where the jewelry store is. He noted that some accomplices had ridden away from Little Rock in the car.

Sighing and shaking his head, Gabriel acknowledged that in his haste to get out of the getaway truck, which the men abandoned behind the shopping center, he left the blue ball cap he had worn during the robbery. It contained his DNA, allowing authorities to eventually trace the robbery to him and arrest him three months later.

Gabriel told jurors that after arriving in Oklahoma after the robbery, the robbers and their accomplices couldn't find a man to whom they had planned to sell the jewelry. Then, he said, they realized that a ring with a $30,000 price tag that some of them had reported seeing in the truck had disappeared, which prompted all of them to strip to prove they didn't have it. The ring never surfaced, Gabriel said.

He said he was exasperated and needed to "get away" from the others, so Darryl Madden, the pickup driver who also pleaded guilty and testified, ended up selling a necklace at a cut rate of $500 to a man who provided a room in his building in the Oklahoma countryside. Meanwhile, Gabriel said, one of his co-defendants -- Jobie Lorenzo Kirk, who has also pleaded guilty -- found a "fence" who bought some of the jewelry for $20,000. But Gabriel said that only enraged him and the other robbers, who thought the buyer should have paid more.

Gabriel said two potential buyers for the remaining jewelry later pulled up in a car to meet with him and Kirk. He said he and Kirk got into the car to discuss a sale, but couldn't agree on a price. Then, he said, one of the men then "got out and just started shooting" at Kirk.

"No," Gabriel said, holding his palms in the air and shaking his head as jurors laughed along with him.

He said Kirk managed to get back into his car, and "burned rubber" to get away, then returned for Gabriel and they left.

"We went to a strip club or something," Gabriel recalled. He said he and Kirk discussed driving to Kansas that night to rob another jewelry store, "but I got drunk and we didn't make it."

In an interview with FBI agents on Dec. 31, 2015, Gabriel admitted his involvement in the robbery. He told jurors it was only the second time he had been caught after a jewelry store robbery.

Defense attorneys Nicki Nicolo and Steven Davis quizzed Gabriel and other defendants who have pleaded guilty and testified, suggesting that they have falsely identified Denton and Shaw as the gunmen to impress prosecutors and score lenient sentences.

Prosecutors are expected to rest their case today, as the trial continues in the Little Rock courtroom of U.S. District Judge Leon Holmes.

Print Headline: Almost got robbed, robber testifies; Jewel-heist jurors amused by bandits’ dilemma of whether to call the police