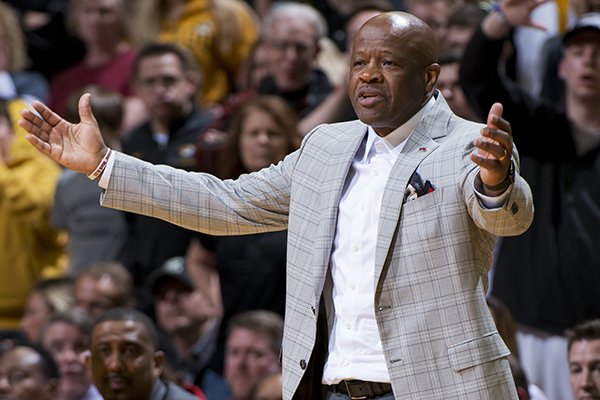 Sometimes it gets wearisome writing about the basketball officiating in the SEC, where referees seem to anticipate about as many fouls as those that really happen.

An observer will see out-of-position referees, sometimes completely blocked out of the line of vision, make a call they obviously thought was going to happen.

It happens all over the SEC, but after Missouri made 27 of 33 free throws Saturday compared to the University of Arkansas, Fayetteville's 12 of 15 to steal a Friday afternoon game as a No. 4 seed in the SEC Tournament from the Razorbacks, it was time for some research in hopes of answering these questions:

Does Mike Anderson's Razorbacks simply foul more than all the other teams?

Or do the referees hate the University of Arkansas?

Only SEC conference games were looked at, and the Razorbacks actually fouled less at Bud Walton Arena than their opponents, but it was close.

That is inconclusive, although it should be pointed out that in nine home conference games the visitors shot more free throws than the Razorbacks five times.

However, their opponents totaled 143 fouls at home, or 47 fewer than in Bud Walton.

If nothing else is learned from this, the Razorbacks shoot better at home than on the road. In Bud Walton, they hit almost 78 percent of their free throws but just 61 percent on the road.

The Razorbacks shot more free throws than their opponent one time on the road this season, 24 to 23 against LSU.

All things considered, it doesn't appear the referees hate the Razorbacks, but the Hogs do foul more on the road than at home. That's odd because Anderson, like Nolan Richardson, is a little more conservative on defense on the road, choosing not to trap and press as much.

However, when the referees stop the game for a total of 48 free throws like those guys did Saturday in Columbia, Mo., it completely changes the flow of the game.

Add all the replays -- which conclusively prove the referees make a lot of mistakes or aren't sure -- and the Fastest 40 becomes half-court basketball.

Perhaps it is time the SEC, or the NCAA if necessary, gives the game back to the players, coaches and fans by penalizing the officials for bad calls.

If a play is reviewed and overturned, the official should lose part of his pay. Since every play reviewed on site is reviewed by an active or former official in Birmingham, Ala., there could be no officials sticking up for each other at the games.

Maybe the officials should be reviewed at the half by the SEC observer in Birmingham. On Saturday, Missouri's defense was just as aggressive as Arkansas', yet the Tigers were whistled for nine fewer fouls.

Maybe it is not intentional, but sometimes the team with the better athletes gets called for more fouls because the SEC officials don't comprehend the quickness and agility and just think there should have been a foul.

Print Headline: Decide what's fair when there's too many fouls