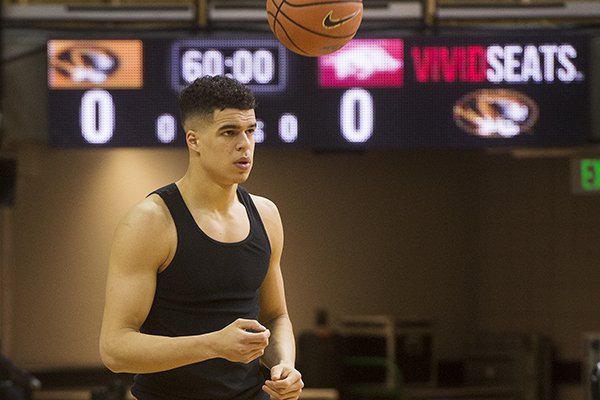 Missouri's Michael Porter Jr. warms up before the start of an NCAA college basketball game against Arkansas Saturday, March 3, 2018, in Columbia, Mo. Porter announced earlier in the day that he won't play in the game.(AP Photo/L.G. Patterson)

Michael Porter Jr. has made more headlines than any player in college history who played only two minutes the entire season.

Since decommitting from Washington and signing with Missouri -- where his dad was hired as an assistant coach -- the young man who is still considered an NBA lottery pick has been in the news.

Even with the No. 4 seed in the SEC Tournament and the double bye that comes with it on the line Saturday, most of last week was filled with stories that Porter finally would make his return against the University of Arkansas, Fayetteville after months of inactivity.

He hadn't played since the season opener when he hurt his back and needed surgery. Several hours before tipoff Saturday, it was announced he wouldn't play against the Hogs but might play in the SEC Tournament.

That would be Thursday because Missouri's victory over Arkansas created a three-way tie for fourth, but Kentucky gets the No. 4 seed because of tiebreakers. Mizzou owns the tiebreaker over the Hogs, which puts Arkansas at the No. 6 seed.

Arkansas will play Thursday in the late game, which will tip about 8:30 p.m. If the Hogs win, they'll get No. 3 seed Florida on Friday.

There may be two games that haunt the Hogs if they look back over their body of work. At Mississippi State, the Bulldogs shot 40 free throws to Arkansas' 12. The Tigers on Saturday shot 27 of 33 on free throws to 12 of 15 for the Hogs.

Almost as big of a difference was that Mizzou outscored the Hogs 15-4 on second-chance points as it outrebounded the Razorbacks 37-25, including 11 offensive boards.

It should be pointed out the Razorbacks were playing really aggressive defense and spent much of the game playing from behind, and Missouri won't get enough credit for its defense. Those were key reasons for the disparity.

Missouri started only one freshman for the final game, and Jeremiah Tilmon -- who like Porter Jr. is 6-10 -- got 17 points and eight rebounds. But it was a different Porter who stole the show -- Michael's little brother Jontay.

Jontay is supposed to be a senior in high school, but he graduated early and joined his brother and dad at Mizzou. He came off the bench Saturday to score 19 points, grab 8 rebounds and just for fun dish 4 assists, but no one is talking about him coming out early for the NBA Draft.

The Razorbacks scrapped the whole second half but could never get into a rhythm or grab the momentum. Every time it looked like the old "mo" was swinging toward the Hogs, the Tigers would go to the free-throw line.

By the time Arkansas shot its first free throws of the second half, there was only 5:05 to play and Missouri was already 12 of 13 from the line.

The Tigers went five minutes in the second half without a field goal -- they had only seven in the final half -- but their four free throws were almost as big as the six points the Hogs scored in the same span.

Arkansas suffered through several droughts in both halves. The Hogs came out shooting well, making five of their first 10 shots and leading 14-7 while the Tigers started 0-5. Missouri responded by making 9 of its next 20 attempts while the Razorbacks could convert only 6 of 19. Mizzou went into the half with a 39-31 lead.

There was a lot at stake Saturday. A double bye is huge for any team hoping to make it to the SEC title game, but Mike Anderson has developed a deep bench.

As for Michael Porter Jr., someone needs to tell him to forget playing in the SEC Tournament. All he can do is hurt himself, and Missouri is pretty good without him.