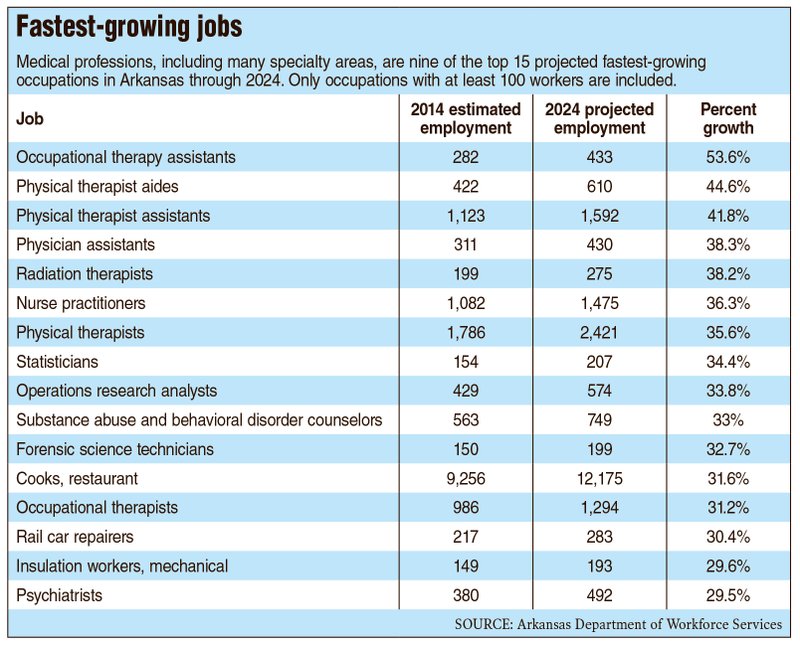 The most persistent challenge he faced in two years of directing the Fayetteville-based Veterans Health Care System of the Ozarks was finding medical specialists to hire, Bryan Matthews said before leaving for a similar post in Biloxi, Miss.

Recruiting medical specialists, including psychiatrists, was a constant struggle, he said.

Matthews wasn't alone in the struggle, medical experts in the region say. Medical Associates of Northwest Arkansas is a group of physicians and other health care providers who cooperate to address the area's health needs.

Northwest Arkansas is "growing like crazy," said Pope Moseley, dean of the college of medicine at the University of Arkansas for Medical Sciences. As the population grows, so does the region's need for specialists.

Stephanie Gardner, interim chancellor at UAMS in Little Rock, said the key bottleneck is the limited number of medical residencies. That problem is everywhere but is particularly important to growing regions such as Northwest Arkansas. The same concern was raised by Pearl McElfish, associate vice chancellor at the UAMS Northwest campus in Fayetteville.

UAMS prepared a report on the shortage recently for the Northwest Arkansas Council, a panel of business and community leaders who identify and try to find solutions for regional problems.

"While medical schools are increasing the number of students, the number of federally funded residency positions has remained flat for now more than 15 years with only some minor exceptions," according to the report. "Federal funding for residencies is not expected to increase in the future, but rather to decrease.

The backlog is compounded in this region by the recent opening of medical schools in Fort Smith, Jonesboro and Joplin, Mo., Gardner said. These new students study osteopathic medicine, a medical approach that considers a patient's environment, nutrition and body system as a whole when diagnosing and treating medical conditions. Graduates of those schools seek the same limited number of residency slots, Gardner said.

The report doesn't give specific figures on how large the backlog is in the region, but nationally about 1.4 medical students are graduating for every available residency position, according to the report.

Mercy Health in Rogers has been receptive to paying for more residencies on their own, Gardner and Moseley said. They are aware that doctors tend to remain in areas where they served their residencies. Therefore, medical centers have an interest in being the home for such residencies, they said.

The Association of American Medical Colleges states the backlog of specialists nationwide is a more serious problem than the raw numbers suggest, according to its most recent policy statement on the residency issue. The population overall is not only growing, but it is aging, the statement says. The older population needs more medical treatment per person. Under-served rural areas -- such as northern and western Arkansas outside the region's metropolitan areas -- are particularly hard hit, according to the statement.

The persistent backlog, over time, has meant doctors are not being replaced in their field by an adequate supply of younger physicians, according to the statement.

"Over one-third of the current physician workforce is aged 55 or older and likely to retire in the coming decade," according to the statement.

The Northwest Arkansas report notes local philanthropy has borne the cost for added residencies in some states. Texas and Michigan have had their legislatures provide some funding. In other states, hospitals are picking up the cost.

Wilson said Medical Associates of Northwest Arkansas physicians have sought out and hired two radiologists who are being trained specifically for imaging breasts, a general radiologist, six family medicine doctors, three urgent care doctors, a pediatrician, two internal medicine physicians, three doctors of chiropractic and sports rehabilitation, a sports medicine and family medicine physician, a pulmonologist and a pulmonary medicine nurse practitioner, a rheumatologist, a gynecologist, two gastroenterologists and a neurologist, all in the past three years.