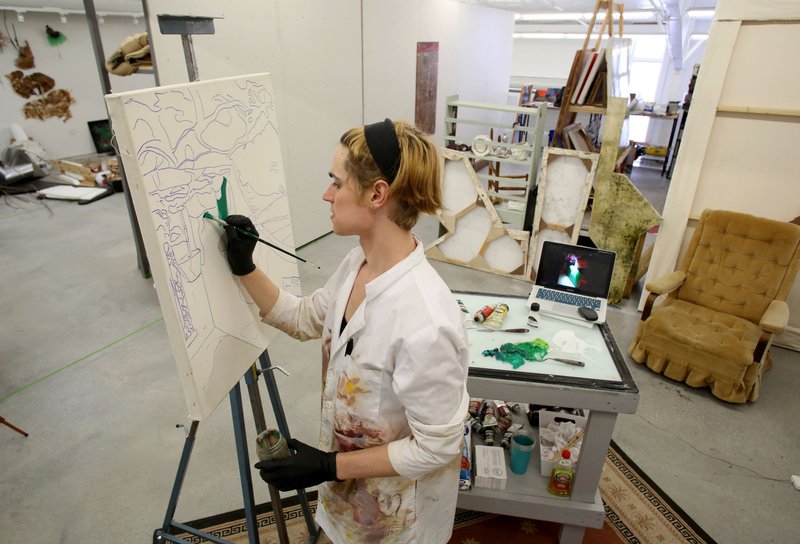 NWA Democrat-Gazette/DAVID GOTTSCHALK Hannah McBroom, a second year Master of Fine Arts student, works on an oil based painting Wednesday, August 23, 2017, inside her studio in the Sculptor Studio at the University of Arkansas Art and Design District in Fayetteville. The University of Arkansas will establish a School of Art in Fayetteville using a $120 million gift from the Walton Family Charitable Support Foundation, according to a press release today from the university. The money will provide financial support for students, regional outreach and public service through partnerships with Crystal Bridges Museum of American Art and expanded degree programs in art history, art education and graphic design.

FAYETTEVILLE -- Despite securing a $120 million gift last year to support arts education, the University of Arkansas, Fayetteville has not been able to land a leader for its School of Art.

Two finalists this week were announced as accepting jobs at other universities, meaning none of the four candidates invited to campus this spring will end up as the school's director, based on a statement from the school's communications director, Kayla Crenshaw.

"There were only two finalists and they have both recently accepted jobs elsewhere," Crenshaw said in an email Friday.

On Monday, Penn State University announced Elizabeth "Cassie" Mansfield as head of its art history department beginning Aug. 16. A Penn State spokesman on Friday did not respond to an email asking her salary. Mansfield has been a senior program officer at the Getty Foundation in Los Angeles.

Two other candidates, Jack Risley, chairman of the University of Texas at Austin's department of art and art history, and James Rolling, professor and chairman of art education at Syracuse University, also visited campus.

However, Crenshaw said the "pool had been reduced to two finalists a month ago."

Neither Risley nor Rolling responded to emails or voice messages left Friday.

Todd Shields, dean of UA's J. William Fulbright College of Arts and Sciences, did not respond to an email and voice message asking about the search process. Crenshaw did not respond to a question asking if either Risley or Rolling chose to withdraw from consideration.

Asked about a timeline for making a hire, Crenshaw said Shields is "recalibrating the search process."

She added that "we believe that it is more important to find the right person to lead and build the future of this school than it is to simply fill the position quickly."

Jeannie Hulen, an associate chairman of ceramics and former department chair, is serving as interim director of UA's School of Art.

The university earlier put together a search committee led by Lynda Coon, dean of the university's Honors College. In March, Coon said the committee reviewed 38 candidates. Coon said Friday that she has not been involved with the search since April.

Cindy Arsaga, an artist and community representative for the committee, on Friday described being impressed after reviewing the submitted application materials.

UA posted the job announcement in October, about two months after announcing a $120 million gift from the Walton Family Charitable Support Foundation.

The university announced the gift as the largest ever to benefit a U.S. university's art school, with about $50 million of the gift for student scholarships and other funds to be used for hiring faculty members and renovating UA's Fine Arts Building.

The Walton gift came six years after the opening of Crystal Bridges Museum of American Art in Bentonville, a project funded in part by a different foundation, the Walton Family Foundation, and supported by Alice Walton, daughter of Walmart founder Sam Walton.

The job announcement described plans for 26 new faculty members over a five-year period, adding to 36 art faculty and staff on the job as of last fall. It also referred to a "fully integrated" and "enhanced" partnership with Crystal Bridges allowing for museum collections to form a basis for teaching.

Then, in December, UA announced a $40 million gift from the Siloam Springs-based Windgate Charitable Foundation to pay for new arts facilities as part of its off-campus Windgate Art and Design District.

The university hired a search firm, Korn Ferry, to help fill the director position. The Los Angeles-based firm is to be paid a fee "based on one third of the total first year's compensation for each position we are seeking to fill," according to contract documents released under the state's public disclosure law.

The four finalists who visited campus each gave open presentations and met with community members at a reception, with anonymous feedback on candidates able to be submitted online.

Print Headline: 2 finalists out of running for UA art job