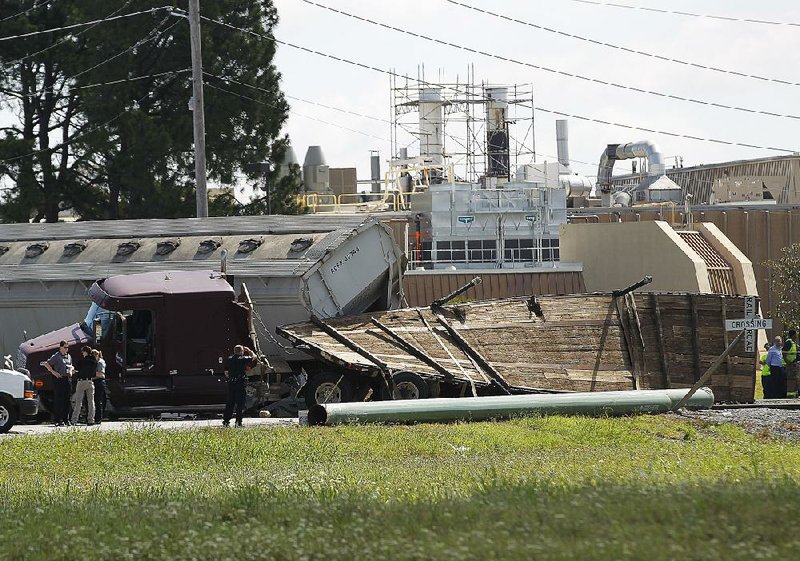 Little Rock police investigate after a train crashed into an 18-wheeler crossing the railroad tracks Thursday on Frazier Pike Road in Little Rock. More photos are available at arkansasonline.com/galleries.

Officers removed the body of a Little Rock Port Authority worker from beneath a train car more than four hours after the locomotive crashed into an 18-wheeler on Frazier Pike Road on Thursday morning.

Donald Melton, 62, of Austin died Thursday morning after a Port Authority train crashed into a westbound 18-wheeler. Melton had announced his retirement after more than 22 years at the Port Authority just one day before, Port Authority executive director Bryan Day said.

Little Rock Police Department Lt. Steve Moore said the train was traveling backward about 9:30 a.m. Thursday when it struck just behind the cab of the truck.

Moore said Melton and one other "spotter" -- workers who watch the rear of the train while it travels backward -- jumped off the train car as it neared the 18-wheeler, but the force of the collision knocked the train off the tracks and onto Melton.

Rescue workers removed Melton's body about 2 p.m. after moving in a crane to lift the toppled rail car, Moore said.

Moore said neither the driver of the 18-wheeler nor any other crew members were injured during the accident, which was still under investigation Thursday afternoon.

Day said Melton had worked on rail crews for more than 22 years as a spotter and in other positions.

Spotters use a radio to inform the engineer when an object or vehicle is obstructing the train's path, Day said.

Day said a radio signal was sent to the engineer, but he was not sure of the details of the communication.

He said he wasn't sure how fast the train was traveling Thursday but that Port Authority locomotives rarely travel faster than 8-10 mph. Moore said he didn't know why the 18-wheeler did not stop before reaching the train tracks.

Day said signs at the railroad crossing are in compliance with Federal Railroad Administration standards and that only one crossing at the Port Authority -- the main entrance -- has lights.

Melton was the first fatality in approximately 50 years of operation, he said.

"We're just devastated," Day said. "We're trying to get our hands around what happened."

Day said the Little Rock Police Department and the Federal Railroad Administration will be investigating the fatality.