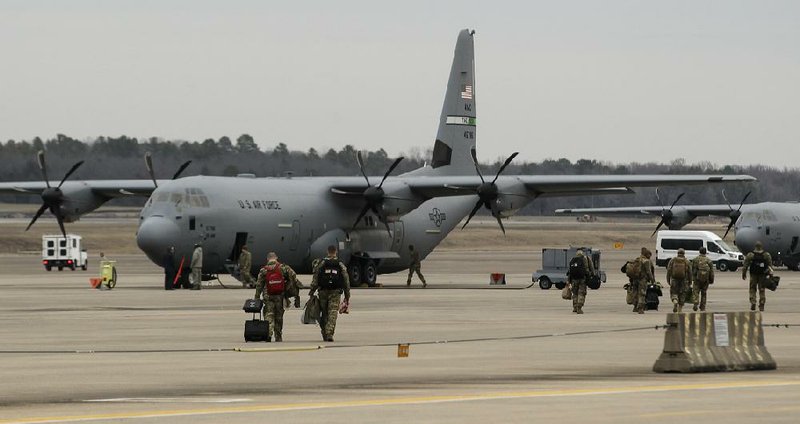 FILE — Airmen walk across the flight line to their C-130J on Jan. 7, 2018 at Little Rock Air Force Base in Jacksonville. - Photo by Thomas Metthe

Federal officials are to tour Little Rock Air Force Base today to determine its suitability for holding people who have illegally entered the U.S., something the governor said he supports if it keeps children and parents together.

An Air Force base spokesman confirmed Wednesday morning that U.S. Department of Health and Human Services staff members would survey the Jacksonville base, located 17 miles northeast of Little Rock, to decide whether children from other countries could be kept there.

That was before President Donald Trump signed an executive order Wednesday that ended a policy of separating parents from their children when the families were caught crossing the southern U.S. border. Now, those families will be detained together. Existing Department of Defense facilities will be repurposed, upon request, to house those families, and the department will construct some facilities if necessary, according to the order.

Even with the policy change, the base tour is still set to take place, spokesman Staff Sgt. Regina Edwards said Wednesday afternoon. Trump's executive order and the tour received the governor's support.

"Let me just make it clear," Gov. Asa Hutchinson said in a phone interview. "I want to be helpful if we can help carry out the policy of keeping the families together."

U.S. Rep. French Hill, R-Ark., said in a statement that he supports Trump's executive order to keep families together while their status is determined and that he's working with colleagues to provide a "permanent, compassionate solution" in the immigration crisis.

However, Hill added, "These children belong with their parents at the border, not hundreds of miles away at Little Rock Air Force Base or other locations in Arkansas."

In light of Trump's executive order, it was not clear whether federal officials would consider the Jacksonville base for holding minors who crossed the border alone or detained families, or both. A voice mail and email messages seeking comment from the Health and Human Services Department were not returned Wednesday.

Hutchinson stressed that today's visit is "preliminary," and nothing is decided.

The last time Hutchinson was in Washington, D.C., he spoke with leaders at the Health and Human Services Department, which oversees unaccompanied minors and children who are brought into the country illegally. The department leaders indicated that they were "continuing to have space needs" and might look at two facilities in Arkansas, Hutchinson said.

He declined to specify the other site besides Little Rock Air Force Base that's under consideration.

With Trump's executive order, facilities that can accommodate those families are needed, Hutchinson said.

"This is a very large logistical challenge, and if we can be helpful in supporting that policy, then we absolutely want to be helpful," he said.

Edwards, the Little Rock Air Force Base spokesman, said she couldn't describe what the tour would entail because "this one is absolutely something different."

"From the seven years that I've been here, we haven't had a tour like this," Edwards said.

A spokesman for U.S. Sen. Tom Cotton, R-Ark., said the senator was not available to comment on the possibility of children being held at the air base. But "bottom line, Cotton opposes this," spokesman James Arnold said in an email.

Before Trump signed the order, state Rep. Clarke Tucker, D-Little Rock, said in a statement that he "cannot fathom needlessly separating a child from their mother or father."

"I cannot support using the Little Rock Air Force Base to implement this shameful policy," he said.

When reached by phone after the executive order was signed, Tucker said he hopes the possibility of detaining children or families at the Air Force base "would not be necessary, at this point." Tucker, who is Hill's Democratic opponent in the November election, added that Trump's change of mind was the "right thing to do."

Before Trump's reversal Wednesday -- something he'd previously insisted that he couldn't do -- social media had been flooded with images of children held in cages at border facilities. Texas news outlets reported on a "tent city" erected on a military base to hold the children, 2,300 of whom had been separated from their parents, officials said Tuesday.

Though Trump's decision was heralded by some as a move in the right direction, the executive order angered immigration rights advocates.

The order asks the attorney general to modify a long-standing immigration agreement so that families who cross the border illegally can be detained throughout the criminal proceedings or until some other decision is made on their statuses.

The long-standing agreement, called the Flores settlement, requires the federal government to release children from custody to their parents, adult relatives or other caretakers. Immigration rights activists say Trump's order allows for indefinite detention of children.

Richard Yada, a retired Little Rock accountant and financial adviser, knows about indefinite detention. The 74-year-old was born in the Rohwer internment camp in Desha County. During World War II, the Rohwer camp was one of 10 sites selected to incarcerate more than 110,000 Japanese-Americans.

Trump's family separation policy had been compared, by some, to that period in American history.

Yada said he'd been thinking about that comparison. He observed the current public outcry. Then he thought about the silence he heard in 1942, when no one spoke up about the Japanese internments, he said.

One day, Yada said, he will probably "wake up and smell the roses." As for right now, "All I can say is, 'Where were they when I needed you?'"

Print Headline: U.S. officials to size up air base as detainee site