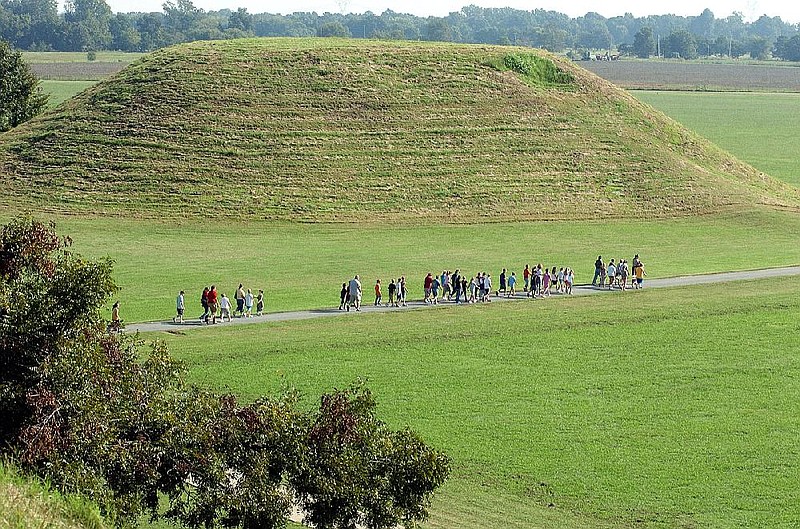 Visitors to Toltec Mounds Archeological State Park can get a prehistoric perspective on the start of summer at the park’s annual Summer Solstice Celebration. The event includes hands-on activities and tours of the mounds.

Different people use different events to mark the start of summer. Memorial Day weekend. The end of school. The ripening of homegrown tomatoes.

But from a scientific perspective, summer starts when the Earth's axial tilt toward the sun is at its peak and the day is at its longest: the summer solstice.

It was an annual event important to prehistoric cultures around the world and right here in Arkansas, and Toltec Mounds Archeological State Park in Scott honors the occasion every year with its Summer Solstice Celebration.

This year, the solstice is today, but the park celebrates on Saturday.

Park interpreter Amy Griffin explains that when the Plum Bayou People built the wall and 18 mounds on the site, "they didn't just put them anywhere. They placed them in certain areas to line up as a big calendar. So, we believe this was what they used to not only tell what time of year it was, but also to have ceremonies. Every year we try to honor that and observe that aligning by having a solstice or equinox celebration."

Visitors to the park can witness that astrological alignment themselves at the gathering.

It all starts at 6 p.m. with hands-on activities featuring primitive-style weapons and take-home crafts.

Then, at 7 p.m., interpreters will lead a guided sunset tour of the site and learn about the careful positioning of the mounds.

That tour will end on Mound H, which Griffin calls "a key piece in the calendar system," for a view of the sunset over Mound B.

Griffin says Mound H, which was mostly destroyed, is relatively flat, but it does require crossing a grassy area that may be difficult for people with mobility problems.

She also recommends sunscreen and definitely bug spray: "Mosquitoes are out and about now."

The park will provide chairs on the observation mound for people to sit and watch the sunset.

The park hosts similar celebrations for the spring and fall equinoxes and, this year, they're adding a winter solstice gathering with a fire pit and hot drinks.

The celebration focuses on a people and a time that aren't always covered in basic history and seeing how they fit into the greater world.

"That's a whole other story we rarely get to talk about," Griffin says. "Especially mound-building culture. We rarely get to see or learn about that. ... We'll talk about the site and the alignment and how special it was. Not only here, but it fits in with the rest of the world. Different cultures around the world did the same thing."