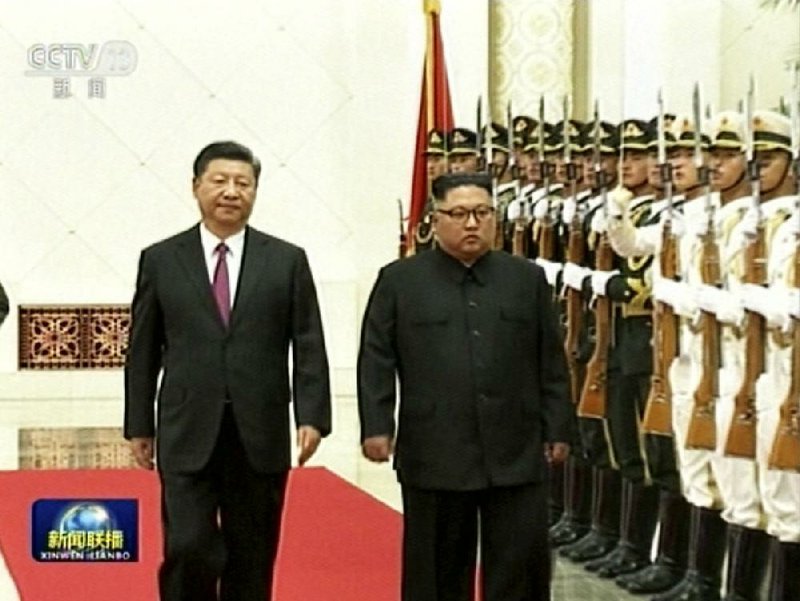 Chinese President Xi Jinping (left) walks with North Korean leader Kim Jong Un during a welcome ceremony Tuesday at the Great Hall of the People in Beijing, in this image taken from video footage run by China’s CCTV.

BEIJING -- North Korean leader Kim Jong Un arrived Tuesday for his third visit to China in the span of three months, meeting with President Xi Jinping at the Great Hall of the People in the heart of Beijing.

The visit comes a week after President Donald Trump met with Kim in Singapore and a day after the United States confirmed it will cancel what Trump called "war games" with South Korea scheduled for August. News of Kim's trip came just hours after Trump threatened China with tariffs on $200 billion worth of goods.

On Tuesday evening, Kim and his wife, Ri Sol Ju, were welcomed by Xi and his wife, Peng Liyuan. Photos from the event show Kim and Xi shaking hands in front of a row of Chinese and North Korean flags -- a visual echo of Kim and Trump's handshake in Singapore.

State broadcaster CCTV said Xi told Kim that through the "concerted efforts of the relevant countries" negotiations regarding issues on the Korean Peninsula are back on track and the overall situation is moving in the direction of peace and stability.

Xi reportedly praised the outcome of the Singapore summit, calling it an "important step toward the political solution of the Korean Peninsula nuclear issue," according to the party-controlled press.

China hopes North Korea and the U.S. can "implement well the outcomes achieved at the summit," Xi said. China would "as always play a constructive role" in that process, he said.

Although details are scarce, the timing and staging of Kim's trip sends a clear message about Beijing's place at the center of East Asian diplomacy -- and its power over North Korea.

"Although it seems there is a booming romance between Kim Jong Un and Trump, Kim understands the hierarchy. He knows that Xi is the Asian Godfather," said Yanmei Xie, a China policy analyst at Gavekal Dragonomics, an economic research firm in Beijing.

"He is making a pragmatic calculation that China can provide economic assistance to integrate North Korea diplomatically and economically into Northeast Asia."

Kim's visit to China this week will renew questions about what happens post-Singapore.

With North Korea's nuclear testing halted, for now, and August's war games off, China may be willing to cut North Korea some slack.

In Beijing, Kim is likely to ask Xi to ease up on economic sanctions -- something the United States strongly opposes.

"China always stands against the so-called unilateral sanctions outside the Security Council framework. This position is very clear and we believe sanctions themselves are not the end," Geng said.

While Beijing and Moscow have supported U.N. restrictions, they bristle at Washington imposing sanctions on its own to pressure North Korea.

Last week, Secretary of State Mike Pompeo said in Beijing at a news conference with Foreign Minister Wang Yi that China "acknowledged that the sanctions regime that is in place today will remain in place until such time as that denuclearization is in fact complete."

But the problem is that there is no consensus on what "denuclearization" means.

The United States wants North Korea to abandon the nuclear weapons program that it took years to build -- an outcome experts see as extremely unlikely.

"There is a regional effort, a sort of Northeast Asia coalition of make-believe, to maintain the fiction that the North Korea will de-nuke as long as Americans keep talking to it," Xie said.

China is less focused on getting Kim to give away his weapons than on getting him to fall into line. It may eventually use trade and investment to keep him onside, experts said.

The question now, Zhao said, is "how can China help North Korea develop its economy?"

China can also help Kim normalize North Korea's diplomatic status. That starts with treating him less like a rogue dictator and more like a visiting statesman.

On Kim's first visit as leader, in March, he arrived unannounced aboard an armored train. Beijing did not disclose his presence, or publish photos, until he left.

He met Xi a second time in May in the Chinese city of Dalian. Photographs of the two leaders strolling and chatting by the seaside were not released until Kim was on his way home.

On Tuesday evening, Chinese media released photographs of Kim meeting Xi at the Great Hall of the People, where he often greets visiting dignitaries and heads of state -- the first time photos of Kim in China have been released while a visit was in progress.