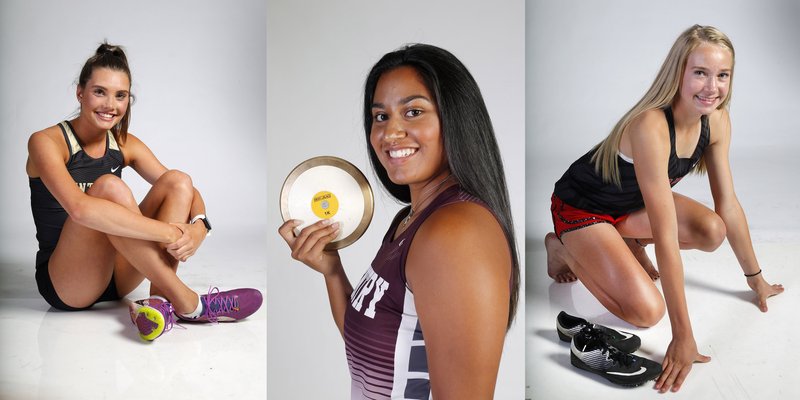 DID YOU KNOW Away from the track, she's a member of Bentonville's cross country and swim teams. She's also a science buff, particularly when it comes to biology. "I think it is so cool how the body works and the study of life. I think it's really unique how things are put together and made," she said.

QUOTABLE "Track season was really good," Quandt said. "I set PRs in almost all of my events, so I was pretty happy with that.

"Honestly, I like the 800 more, and I ran it more because I liked it more. It also worked out better for my teammates. I probably think the 1,600 at state had to be the defining moment. It was a really cool race, getting to run against Rebecca. At the end, both of us were just going at it and giving it our all." 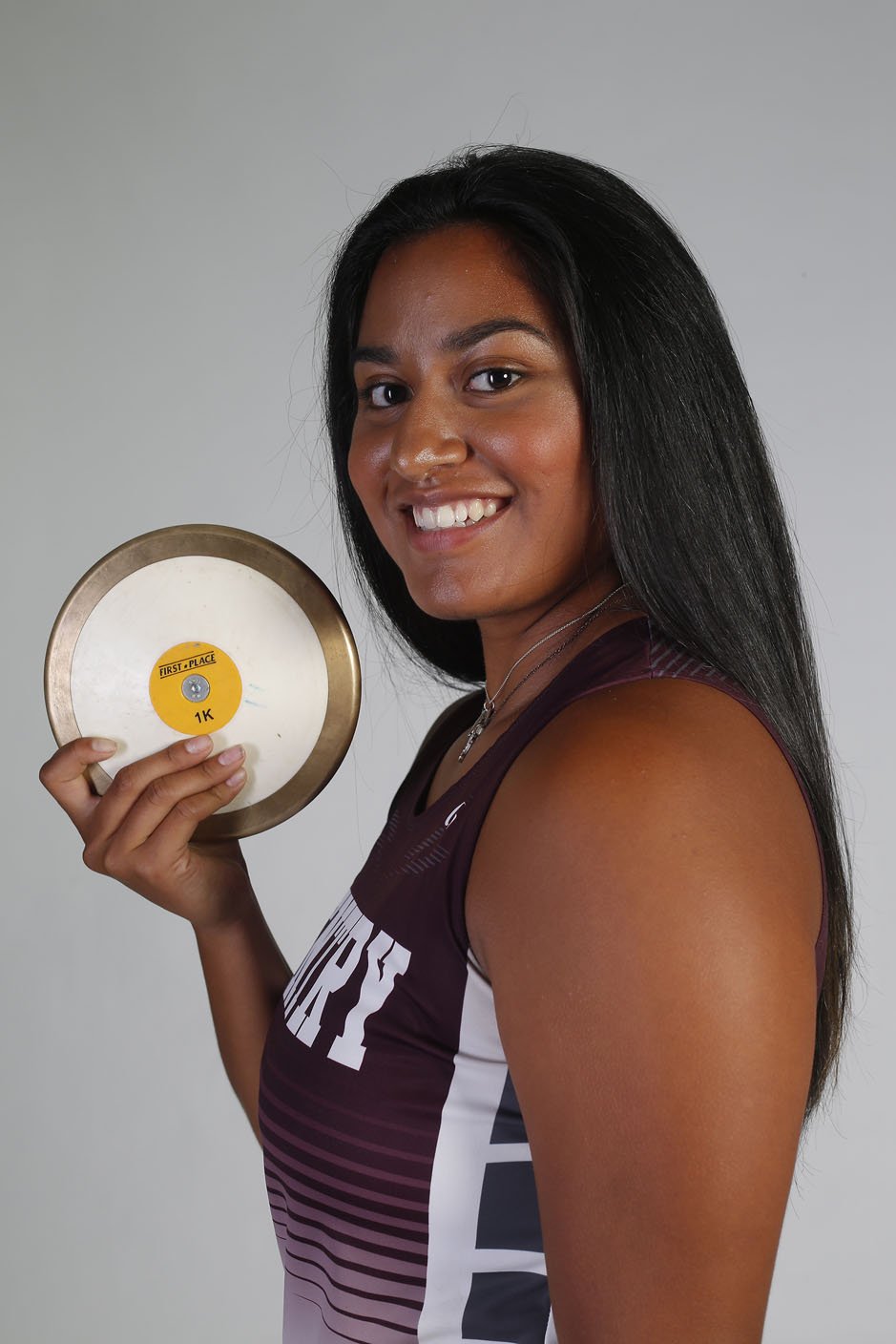 Chastery Fuamatu of Gentry is the All-Northwest Arkansas Democrat-Gazette Girls Track Athlete of the Year.

THE SCOOP Broke the Class 4A state record and the state overall record in the girls shot put with her throw of 44 feet, 2.5 inches during the Class 4A state meet at Pocahontas. She broke the previous Class 4A mark of 41-9.5 set by Sarah Pfeifer of Ozark in 2001 and the previous overall mark of 44-0.5 set by Rogers' Heather Lakey in 1997. ... Also won the Class 4A state title in the girls' discus with a 128-4, making her a two-time state champion in both events. ... Won the Meet of Champs girls discus title with a throw of 138-6, which was the state's best performance this spring. ... Broke the state indoor meet record for Class 1A-4A schools in the shot put with a throw of 42-3.25. ... Signed a national letter of intent in April to throw the discus and shot put at Arkansas State.

DID YOU KNOW Fuamatu was a true multi-sport athlete during her high school career at Gentry. She played volleyball in the fall, basketball in the winter (she averaged 7 points per game and led the Lady Pioneers in rebounding and free-throw attempts) and split her duties between soccer (as a goalkeeper) and track in the spring.

QUOTABLE "I think it's crazy. It just doesn't seem real to me," Fuamatu said. "I was just going in there trying to break the Class 4A state record because I had thrown around 42 feet, but nothing past that. When I first saw that I had broken the overall state record, I thought it was crazy until I went and looked up the record.

"On my last throw, I thought I had just thrown about 41 feet, and I was shaking my head. I was going over to shag my shot, and when they announced '44-3,' I stopped, and I thought to myself 'Did they really just say that?' They called officials over to measure it again. I didn't know my coach was recording it, and I was trying not to freak out. It was crazy." 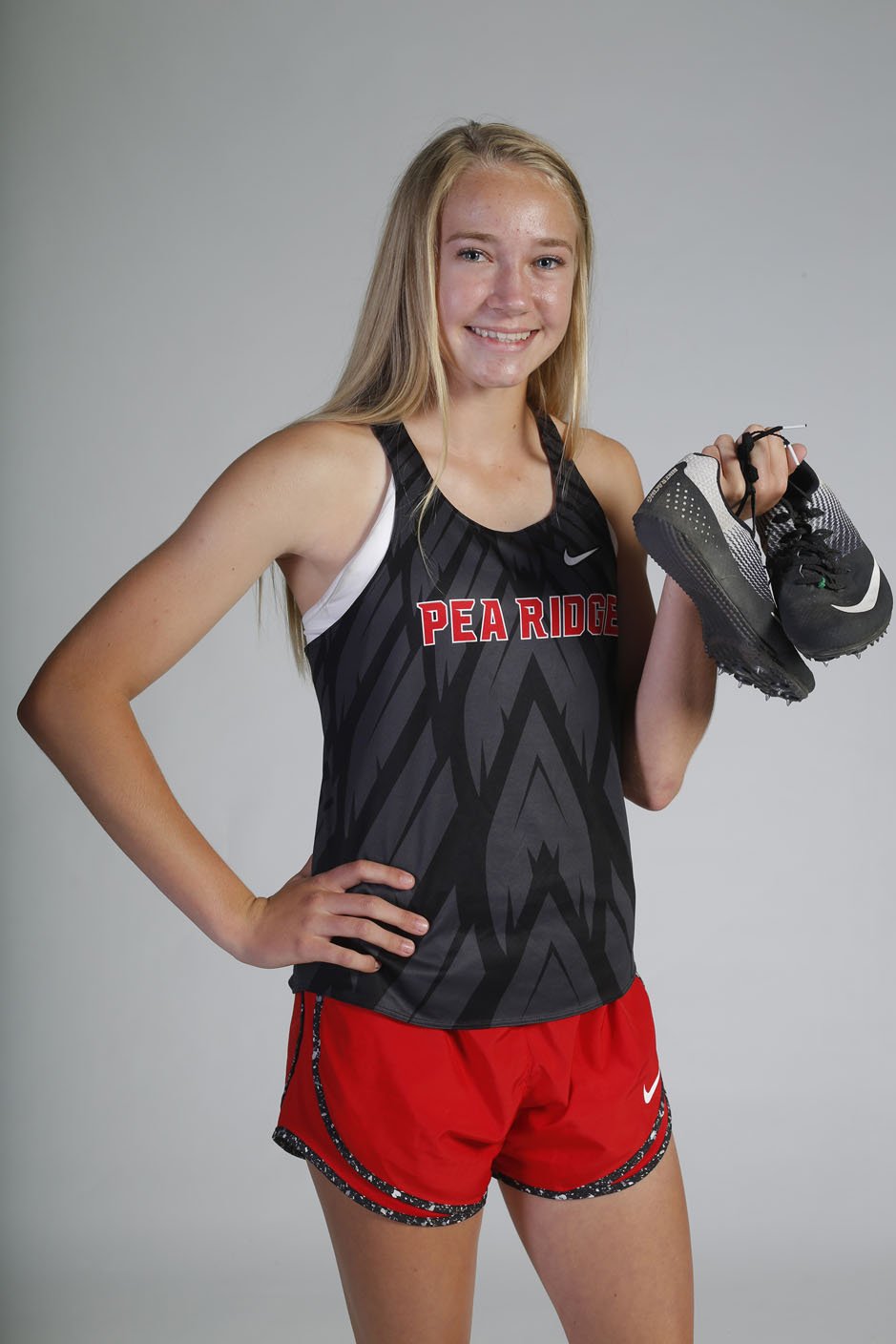 Blakelee Winn of Pea Ridge is the All-Northwest Arkansas Democrat-Gazette Girls Track Newcomer of the Year.

THE SCOOP Winn played a big role in Pea Ridge's girls winning the Class 4A state track championship this spring in Pocahontas. She was the Class 4A state champion in the 100- and 300-meter hurdles, then finished second in the long jump, fourth in the 200 and fifth in the triple jump during the same meet. ... Her personal-best time of 15.59 seconds in the 100 hurdles was good for seventh in the state overall, and she had the third-best time in the 300 hurdles at 45.83 seconds. ... Competed in three events during the Meet of Champs, with her best performance being a third-place finish in the 100 hurdles.

DID YOU KNOW Winn not only is a multi-event athlete on the track, but she also is a multi-sport athlete. She split her time this spring between track and softball, where she played the outfield. She also plays shortstop on her travel softball team, and she plays basketball for the Lady Blackhawks.

QUOTABLE "It was a really good track season," Winn said. "I practiced a lot when I didn't have softball, and I had a lot of fun. Doing all those events could be crazy, but I just did what my coach told me to do.

"The defining moment had to be when I beat the Pocahontas girl in the 300 hurdles. She was probably about 50 meters ahead of me, and I came back. I don't know what kicked in, but I got there."