Fast on the track: ASU’s Bacon sizzling on way to Eugene 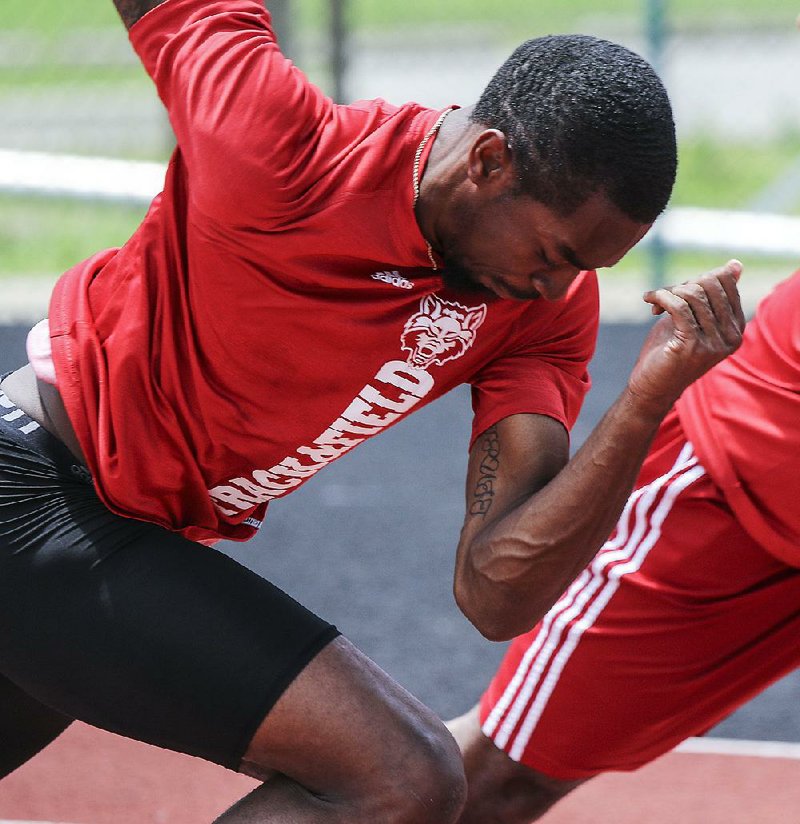 Jaylen Bacon breaks from the blocks during a recent practice at the Arkansas State University Track and Field Complex in Jonesboro. He will be competing in the 100 and 200 meters at the NCAA Outdoor Track and Field Championships in Eugene, Ore.

This track story begins the same way most track stories of the past decade begin: A snapshot of Usain Bolt.

The Jamaican sensation, holder of three world records, was running his final race.

It was the final leg of the 400 relay at the IAAF World Championships in London, August 2017, and Bolt had just received the baton.

What happened next has been told and retold: Bolt jolted, gimped and fell with a left hamstring injury; he denied a wheelchair, limped across the finish line and ended a career in pain.

But in the background, Team USA finished second to Great Britain.

Even before Bolt received the baton, a young American from Arkansas State University had set his team ahead of the Jamaicans during the third leg of the race.

Jaylen Bacon handed the baton off to the anchor, hung back and pumped his right fist in encouragement.

"He is the greatest. He is track and field," recalled Bacon, 21, nearly a year later. "It was sad to actually see. But at the same time, it made me thankful to be part of his last race."

And so, the fall of greatness gave way to the rise of someone new.

Bacon rose to the international scene by winning silver with that USA relay team, which he joined after placing fourth in the 100-meter dash at the 2017 USA Outdoor Championships.

Bacon's ascension continues when he runs the 100 and 200 meters in the NCAA Outdoor Track and Field Championships in Eugene, Ore., starting Wednesday.

He tied this year's world lead with a 9.97 time in the 100 at the NCAA West Preliminaries on May 25 with the chance of becoming the Red Wolves' first national champion sprinter since Sharika Nelvis won the women's 100 hurdles in 2014.

With an amateur championship in the present, a professional and Olympic career in the future, Bacon maintains a spectacular climb by reaching for rungs of his own making.

"Honestly, I just want to see how fast I can be," said Bacon, a senior at ASU. "That's honestly all it's ever been."

Bacon said he first realized he was fast in the eighth grade, when he consistently beat his cousins in foot races.

With eight aunts and three uncles in Eastover, S.C., Bacon had plenty of cousin competitions, and he desired for something he could own.

"It was always 'Who can do this? Who can do that?' Bacon said. "[Running] was the only thing I could do better than anyone else."

His high school football career was short -- when he realized if "you can run fast and you can't catch, there's nothing else for you to do" -- and he committed to track.

Bacon worked out a deal with his father, Shelton, that if he won a state championship in any event, Shelton would pay for Bacon's first tattoo.

That tattoo emblazons Bacon's right bicep: Praying hands, wrapped with a scroll that reads "The Lord is my light and my salvation; whom shall I fear?"

The 10.79 in the 100 he ran at state in 2013 was enough to gain interest from Coastal Carolina, and his bump down to 10.51 seconds as a senior brought late interest from Virginia Tech.

But by February 2014, Bacon had already visited Jonesboro and committed to ASU.

Red Wolves Coach Jim Patchell remembers Bacon glancing at the record board at the track facility and pointing at Ed Preston's 1977 100-meter school record of 10.05 seconds.

Bacon broke the record his junior year with a 10.0 finish in the 2017 Sun Belt Conference Outdoor Track and Field Championships.

When Bacon enrolled at ASU, Patchell assigned him to live with another incoming sprinter, Elijah Ross.

Bacon said he and Ross have become best friends.

The two compete constantly, Ross said, gaming against one another on Xbox as soon as they wake up.

Patchell said, "It's just awesome to see them end their career on the big stage."

Bacon doesn't expect it to be the end.

On the left of his chest, his birth date is tattooed next to a quill pen.

A space is available on the right.

When Bacon signs a professional contract, he said that space will be filled with a tattoo of that contract.

NOTEWORTHY Tied for this year’s top time in the 100-meter dash set at the NCAA West Preliminaries on May 25. … Placed second as part of the United States 400-meter relay team at the 2017 IAAF World Championships. … Finished fourth in the 100-meter dash at the 2017 USA Outdoor Championships with a time of 10.10 seconds. … Four-time All-Sun Belt Conference. … Holds the outdoor school record in the 100 (9.97 seconds) and the indoor school record in the 200 (21.02 seconds).

WHEN Wednesday through Saturday

WHERE Hayward Field in Eugene, Ore.

Print Headline: Fast on the track: ASU’s Bacon sizzling on way to Eugene