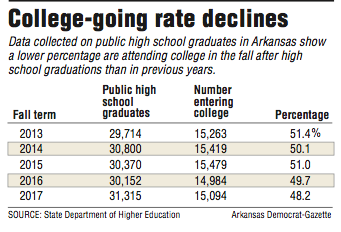 FAYETTEVILLE -- By one measure, the percentage of students from Arkansas public high schools going on to college dipped for the second-straight year.

Higher-education leaders on Thursday questioned the meaning of data that doesn't include some student populations, such as private-school graduates and Arkansans attending college outside the state.

But such a decline in Arkansas, paired with earlier reports of overall lower college enrollment, may work against efforts championed by elected officials to boost the number of college graduates in a state whose educational attainment ranks below national levels.

A report by the state Department of Higher Education at a meeting Thursday showed 31,315 public high school graduates in the 2016-17 school year. Out of that group, 15,094 students, or 48.2 percent went on to attend public or private colleges or universities in Arkansas last fall.

Out of the about 3 million U.S. students completing high school in 2015, the most recent year with data available, about 2.1 million, or 69 percent enrolled in college by the following October, according to the National Center for Education Statistics.

"By no means are we more than 20 points behind the national college-going rate," Hazelwood told Department of Higher Education Coordinating Board members at a meeting held on the University of Arkansas, Fayetteville campus. "We're missing a lot of data points that would raise our rate."

The statistics also do not account for students who attend college out of state, so they are counted the same as students not attending college.

Keven Anderson, a coordinating board member, asked if perhaps private high school attendance and home-schooling was increasing in the state.

He added that he's heard private schools have high college-going rates, and he said that perhaps this could explain the downward trend reported Thursday. Hazelwood said the information about those student populations was not available for the department's college-going rate analysis.

Other data sources provide some insight into the size of student populations excluded from the report.

Comprehensive private-school enrollment of high school seniors in Arkansas was not available from the National Center for Education Statistics. Some large private schools reported increases in the number of 12th-graders in 2015-16 compared with 2013-14, while others reported decreases, according to data from the center.

Maria Markham, director of the state Department of Higher Education, told the Democrat-Gazette that "we're seeing an increase in the number of home-schoolers and private-school kids." She said the upward trend "would make the college-going rate that we could capture go down."

Markham said the economy, too, is a factor. The state's unemployment rate has been below 4 percent in recent months.

"Not just for adult populations but also for high school students, when they can graduate and go right into the workforce, that does have an impact on the college-going rate," Markham said.

In December, the state Department of Higher Education reported a 5 percent decline in college enrollment from fall 2012 to fall 2016. Total enrollment decreased to 165,909 from 174,667.

"Often a postsecondary credential is used, in a way, to kind of travel and transfer into new positions. It creates a little more opportunity," Therriault said.

State leaders have long pushed for a boost in the number of college graduates.

In 2016, Gov. Asa Hutchinson introduced his support for a revamped system of higher education funding while describing a goal to boost educational attainment.

"My goal continues to be increasing the percentage of Arkansans that are career-ready and equipped with degrees and industry-recognized certificates," Hutchinson said at the time.

Based on U.S. Census Bureau estimates from 2012-16 surveys, Arkansas is below the national average in the percentage of adults age 25 and older who have college degrees.

Similarly, the population estimates for Arkansas are an estimated 127,004 with associate degrees, 273,557 with bachelor's degrees and 150,889 with graduate or professional degrees.