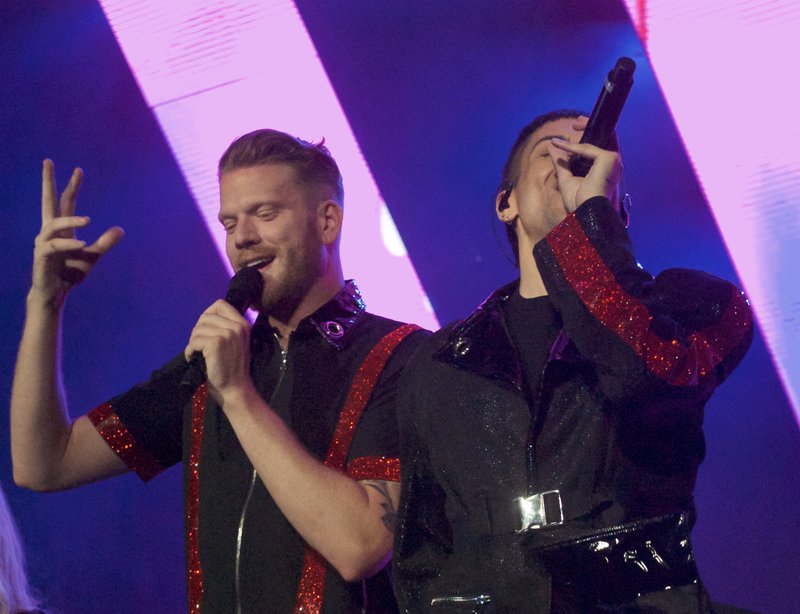 On a not-too-warm Wednesday evening in July, Northwest Arkansas music lovers enjoyed a real treat at the Walmart AMP in Rogers. International a cappella phenomenon Pentatonix performed for a nearly full house supported by indie/pop sibling act Echosmith and the sweet sounds of Calum Scott.

Though Scott went on 15 minutes early (disappointingly, as this reporter was held up in the will-call line), the soulful singer still performed for most of the audience. Luckily, it seemed most in the audience showed up well in advance of the scheduled start time so, as the first of two openers, Scott wasn’t forced to perform to still-filling seats. It was lucky for the audience, too, because Scott — with his sweet vulnerability, silky British accent and stirring voice — was a delight. The singer shared his coming-out experience before performing the not-yet-released “No Matter What.” The song itself was moving and goose-bump inducing, but when Scott had to turn his back to the audience at its conclusion to wipe his eyes, and had an emotional reaction to the standing ovation awaiting him when he turned back around, it pushed the performance over the edge. Thank goodness those of us stuck in the will-call line didn’t miss that and his closing song — the version of Robyn’s “Dancing On My Own” that made him famous.

Sibling act Echosmith took the stage following Scott and perky lead singer Sydney Sierota tried her best to get the crowd involved with some call-and-response, some encouraged arm-waving and using the full length of the stage. But it’s always hard for an opener when the majority of the audience doesn’t seem to know their content, and the pit is filled with seats instead of being standing room. Sierota was sweet, though, with her doe-like stage presence, sharing stories with the audience and throwing in some hair-flips to the beat in trying to energize the crowd. At 21-years-old (brothers Noah on bass is 22, and Graham on drums only 19) Sierota is self-aware when it comes to her youth — acknowledging how some of the songs she wrote at just 15-years-old have changed as she gains more life experience. Having heard from a friend who attended the group’s recent headlining show in Austin, Texas that Sierota likes to film the crowd on her phone rather than sing herself during the most popular numbers — and that the set includes dancing with umbrellas and handing out flowers — I have to admit I was expecting something a little more out there. Echosmith stayed focused on the music, though, and only filmed the crowd briefly during their biggest hit “Cool Kids.” I suspect as the band itself continues to gain life experience, they will become more at ease in front of crowds of nearly 10,000. And as their star continues to rise and audiences know more than just the radio hits, the larger crowds will, in turn, become more welcoming, too.

With dramatic back lighting, Pentatonix emerged from behind five sets of short stairs on the stage a little after 9 p.m. After a short intro sampling Ed Sheeran’s “Sing,” the quintet jumped into their bouncy Bruno Mars cover of “Finesse” — a song from their latest and sixth studio album “PTX Presents: Top Pop, Vol I.” In fact, the set included many numbers from the new album, out April 13, including Charlie Puth’s “Attention,” Demi Lovato’s “Sorry Not Sorry” and two crowd-pleasing mashups. Originally known for their covers, Pentatonix’s YouTube channel, and subsequently their concerts, are also full of these exciting mashup moments, a few original tunes and an “Evolution of…” every now and then. (This tour, the evolution is of Rihanna, the person tenor Mitch Grassi gushes he wants to come back as in his next life.)

The show involved a surprising amount of choreography, though it was relatively simple. But there’s still something so visually pleasing about watching five artists you know aren’t lip synching step, clap, or bob and weave in time to the music. Also visually pleasing is the group’s coordinated outfits they’ve been faithfully donning since their early days on season three of NBC’s “The Sing-Off.” The five-piece did perform a nice mix of songs from across their seven years together, but also an impressive variety of styles and engaging moments. In the middle of the show, percussionist/beatboxer Kevin Olusola is given a beautiful moment to shine when he’s left solo on stage to perform his signature beatboxing and cello playing. Yep, the man plays the cello at the same time as beatboxing and it’s mesmerizingly impressive, elegant and unique. Following this moment for Olusola, new member and bass singer Matt Sallee joins him on stage for a fun romp through some throwback hits.

The staging incorporated elaborate lighting and skinny, floor-to ceiling video boards (five of them) reminiscent of the five bars displayed on several of the group’s albums. The appreciative and excited crowd couldn’t have been more diverse in age and had the most significant reactions to Pentatonix’s moving version of Leonard Cohen’s “Hallelujah” and their encore that brought down the house with Queen’s “Bohemian Rhapsody.”