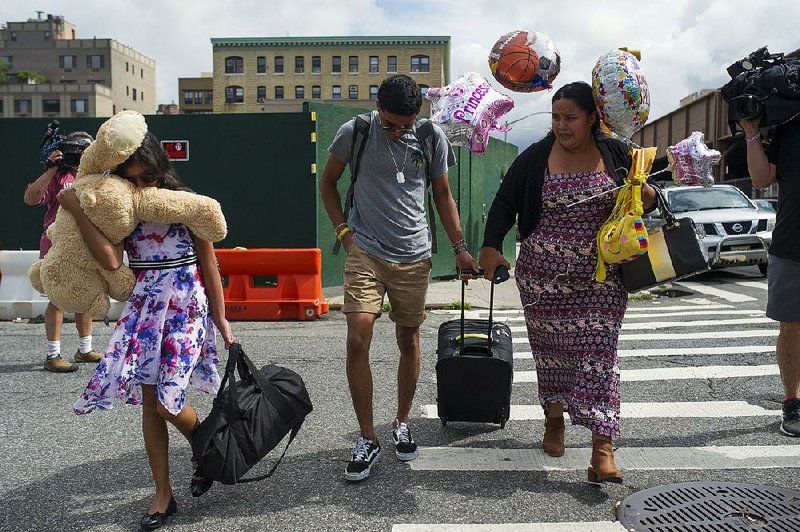 Carolina Ramos (right) leaves a nonprofit welfare agency Thursday in the East Harlem neighborhood of New York with her daughter and son. Ramos said they had been separated for 120 days. “I thank America that I am now with my children,” she said.

The federal government reported Thursday that it was close to reuniting the last families separated at the southwest border who have been deemed eligible for reunification and would substantially meet a court-ordered deadline to reverse an immigration policy that drew international condemnation.

Officials from the Department of Homeland Security said they had reunited 1,442 of the last group of children with their parents and expected to complete all eligible reunifications by midnight Thursday, Pacific time.

Still, hundreds of children remained in government custody, and work to address the effects of the family separation policy was far from over. The parents who were deemed eligible for reunification do not represent all those who were separated from their children after crossing the border, a practice that began last summer and escalated in May.

At least 917 other parents of children older than 5 were not cleared to recover their children this week because they failed criminal background or parental verification checks. The parents of 46 children under 5 were similarly excluded.

The parents of about 431 children appeared to have been deported without them, and the government has yet to find those parents. Their futures, along with those of about 37 children whose parents have not yet been identified, remain uncertain.

President Donald Trump's administration insisted it would meet the court deadline by reuniting all of the family members that it deemed eligible for reunification.

Chris Meekins, the head of the office of the assistant secretary for preparedness and response for the Health and Human Services Department, said the government would continue to reunify families throughout the evening.

"We are on track to reunite all eligible parents in [Immigration and Customs Enforcement] custody," Meekins said.

"The only deadline they are meeting is the one they have set for themselves," said Lee Gelernt, lead counsel for the American Civil Liberties Union, which filed the federal lawsuit challenging the family separations. "The government should not be getting applause for cleaning up their own mess, but moreover, they're still not meeting the deadline for all the families."

Still, it appeared that the judge handling the case, Dana Sabraw of U.S. District Court in San Diego, was inclined to allow the government some leeway in complying with his order to rapidly bring separated families back together.

"The parties are really working through the issues in a very measured and successful way given the enormity of the undertaking," Sabraw, an appointee of Republican President George W. Bush, said at a status hearing early this month.

Both sides were due back in court today, when the judge is set to decide whether to ban deportations of families for seven days after they are reunified so that parents could have time to discuss their options.

The Department of Homeland Security's internal watchdog said it would review the separation of families, along with the conditions at Border Protection facilities where children are held, in response to scores of congressional requests to do so.

"I think it's going to be really hard detective work," he said. "And hopefully we're going to find them."

CHAOS ON THE GROUND

The reunifications have unfolded in chaotic scenes across the country. Many have been concentrated in Arizona, New Mexico and Texas, where families have been funneled into federal offices that were designated as "staging facilities," overwhelming area resources to the extent that some parents have had to wait days after arriving to rejoin their children.

At one such facility in south Texas, the Port Isabel Detention Center, the government has been labeling some parents as "released" while they are still in custody, according to Bethany Carson, who works for Grassroots Leadership, a nonprofit advocacy group in Austin.

Carson said hundreds of parents were sent to Port Isabel in recent weeks. After receiving word in the middle of the night from Immigration and Customs Enforcement officials that their children had arrived, the parents quickly changed into street clothes and were broken into groups of about 70 to wait to be reconnected.

Some waited up to a week, Carson said, and were not allowed access to showers, phones or religious services while efforts stalled to return their children.

"They're completely cut off from the outside world," she said. "And officials are saying they're free."

Last-minute logistical planning to meet the deadline has led to some mistakes. Some children have been sent to the wrong facilities, according to a government official who spoke on condition of anonymity because they were not authorized to discuss the reunification efforts.

On Tuesday, two siblings, 9 and 14, were abruptly flown from New York to be reunited with their mother in the Southwest -- but the mother may have already been deported, according to the children's lawyer, Priya Konings. On Wednesday, a caseworker was in "panic mode" trying to resolve the situation.

The hours and days after reunification have come with their own challenges, which have largely been absorbed by aid groups tapped by the government to provide emergency shelter and food, as well as transportation. While it is not typical for the government to support migrants once they are released from federal custody, the separation policy left many families far from the border, where a long-established network of shelters and volunteer organizations has traditionally provided support.

Danielle Bernard, a spokesman for Lutheran Immigration and Refugee Service, one of two organizations working with the government on family reunifications, said her group, too, was feeling the time crunch of the court order.

Bernard said that the organization's two offices coordinating efforts in Arizona and New Mexico were given only a few days to prepare to receive about 300 families -- or at least 600 people in all.

"This has really been something completely new to all of us," Bernard said. "Usually we have weeks or months to develop programs to make sure people have the support they need. In this situation we've been given like 24 hours' notice."

Some children who had not seen their parents in weeks or months seemed stoic and slow to accept that they would not be abandoned again.

Lutheran Social Services support worker Julisa Zaragoza said some reunified children in Phoenix were so traumatized they were afraid to go to the bathroom by themselves, fearful their parents would be gone when they came out.

One father who was reunited last week said his young daughter did not believe that he would not leave her a second time.

Jose Dolores Munoz, 36, from El Salvador, was reunited with his 7-year-old daughter last Friday, nearly two months after they were separated. He said his daughter cries when he leaves the house because she thinks he's not coming back.

"She is afraid," Munoz said in Spanish. "Yesterday I left her crying, she is telling me, 'You are not coming back. You are lying. You are leaving me.'"

After their immediate needs are met, many families have relied on donated travel miles, cellphones and money, pooled by advocates, to regain some stability.

A charitable organization called FWD.US -- founded by technology leaders including Microsoft founder Bill Gates, Facebook CEO Mark Zuckerberg and Dropbox founder Drew Houston -- was paying for the airline tickets, the bus tickets and the lodging for all the families newly reunited in the Phoenix area to get them to relatives living all over the United States, said Connie Phillips of Lutheran Social Services of the Southwest. She said a phone company had provided 500 mobile phones for the migrants, each with six months of free service.

Phillips said the parents and kids open up as they go through an assessment process with workers. She said the outpouring of donations has been comforting.

"We have seen a lot of people come together over this, we're seeing the best of what Americans can be," she said. 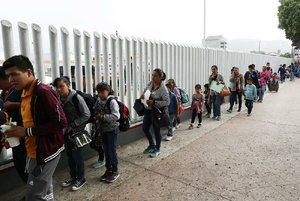 Photo by AP/GREGROY BULL
People wait Thursday near the San Ysidro port of entry in Tijuana, Mexico, to cross into the United States to begin the process of applying for asylum. Thousands of asylum-seekers continue to arrive at entry sites.