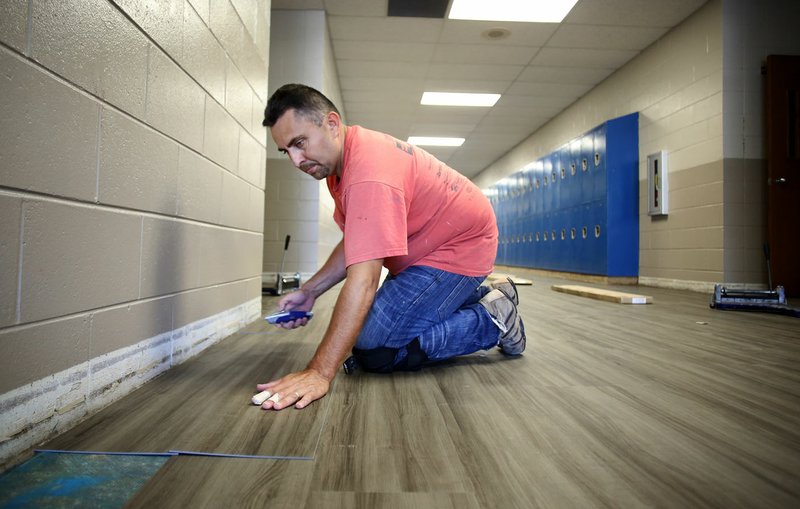 NWA Democrat-Gazette/DAVID GOTTSCHALK Wilfredo Calderon, with Davis Flooring, fits a piece of LVT tile July 6 in the hallway at Woodland Junior High in Fayetteville. New tile is being put down new tile in the hallways and cafeteria of the school. Northwest Arkansas school districts are busy working on facility improvement projects while staff and students are away for the summer break.

The kids may be gone, but schools still see plenty of activity during the summer as officials prepare their buildings for another academic year.

Summer gives districts the opportunity to take care of many facility projects and maintenance issues, especially those deemed easier to do while students are on vacation.

• Bentonville School District is building its 12th elementary school on Haxton Road in Rogers. The school is scheduled to open in August 2019.

• Rogers School District is building its 16th elementary school at West Garrett and South Bellview roads. It is scheduled to open in August 2019.

• Arkansas Arts Academy, a charter school in Rogers, is doing a complete makeover of its high school campus. The construction and renovation phase is set to be done by the start of school next month; renovation of another building will begin at that time and take until January.

The to-do list may range from testing fire-safety equipment to replacing a roof. There are floors to wax, parking lots to resurface and walls to paint. Classrooms may need to be renovated to serve different purposes.

"We're really proud of the work our maintenance and custodial guys are doing," Cleveland said. "They deserve a tremendous amount of gratitude and respect, because when our kids come back, our buildings look new."

He acknowledged workers who mow about 700 acres each week as an example.

"That takes quite a team," Cleveland said. "It takes a lot, especially in these temperatures."

Springdale typically budgets about $1 million every year for summer projects. That might sound like a lot, but spread across 31 buildings, it goes quickly, Cleveland said.

The district is adding a bus lane and parking spaces at Central Junior High School, replacing the siding on the Pre-K Center building and replacing a fence outside Springdale High School.

All the windows were replaced at the Washington Building on Emma Avenue as part of an ongoing renovation of the building, which also got a new roof last year. The 95-year-old Washington Building most recently served as home to social services and English as a second language departments, but they have moved to other buildings, leaving Washington mostly vacant.

The building is being renovated to "provide for future offices," said Rick Schaeffer, communications director for the district.

Workers wax the floors in all the buildings. The district recently switched to a new system where all custodians hit one building at the same time, then move on to the next. It has been successful so far, Cleveland said.

A project to improve the track at Hunt Elementary School and connect it with the Razorback Greenway was completed last month. The Blue & You Foundation, affiliated with Arkansas Blue Cross and Blue Shield, gave the district a $38,500 grant for the project.

Major roofing projects are the priority this summer at Bentonville High School's south building and Ardis Ann Middle and Elm Tree Elementary schools, which are connected. The School Board approved spending a maximum of $2.5 million for the three projects. Lower-than-expected bids allowed the district to tackle a partial roofing project at Washington Junior High School, according to Paul Wallace, facilities director.

Work continues on the West High School stadium. That $3.8 million project began in March and is on schedule to be finished by Aug. 31, the football team's first home game, according to Scot Hundley, a project manager with Flintco, the firm managing the job.

Bentonville started a building cleaning schedule June 1. Work includes removing all furniture from classrooms; mopping, waxing or shampooing carpets and floors; and wiping down furniture, windows and walls. Hallways and common areas are usually cleaned last after all furniture has been returned to classrooms and offices, according to Wallace.

Also at Woodland, a fence is being built around the back of the property, driveways and parking lots are being resurfaced, and a buzz-in entry system is being installed, Tate said.

Washington Elementary's playground is getting a major makeover to the tune of about $574,000, a figure the School Board approved in February. The project is intended to fix longtime drainage and erosion issues at the playground. 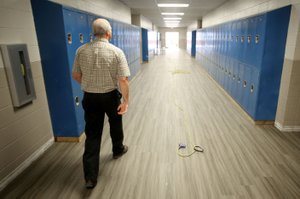 NWA Democrat-Gazette/DAVID GOTTSCHALK David Tate, director of physical plant services for Fayetteville Schools, walks on new LVT tile July 6 in the hallway at Woodland Junior High in Fayetteville. New tile is being put down in the hallways and cafeteria of the school. Northwest Arkansas school districts are busy working on facility improvement projects while staff and students are away for the summer break.

Some remodeling at Fayetteville High School is underway to add a medical professions classroom. Such renovation projects are common this time of year, Tate said.

Then there are mandatory tests and inspections to do on things such as heating and air equipment, fire extinguishers and gas lines, Tate said.

Rogers School District is spending about $189,000 this summer to build a hallway between the two buildings on Lowell Elementary School's campus so students don't get caught between the buildings, which are ordinarily locked for security reasons. Enclosing the walkway will allow easy travel.

The project is on schedule for completion by Aug. 1, except for installation of new doors that won't be delivered until mid-August, said Charles Lee, assistant superintendent for general administration.

Another project beginning this week is at Oakdale Middle School, where the library, which sits in an open area, will be enclosed.

"That will give some privacy to that area so there's no distractions from students in the hallways," Lee said.

The district is resurfacing some of the exterior walls at Tillery Elementary School, the Regional Educational Alternative Program building and the technology building, giving them a white finish that matches the neighboring Administration Building.

Rogers spends between $2 million and $3 million every year on facility upgrades, maintenance and capital improvement projects. The goal is to keep all of the buildings, not just the new ones, in good shape to provide a quality environment for students, Lee said.

"We've got 3 million square feet of facilities," he said. "It's going to cost money to continue to maintain those facilities."