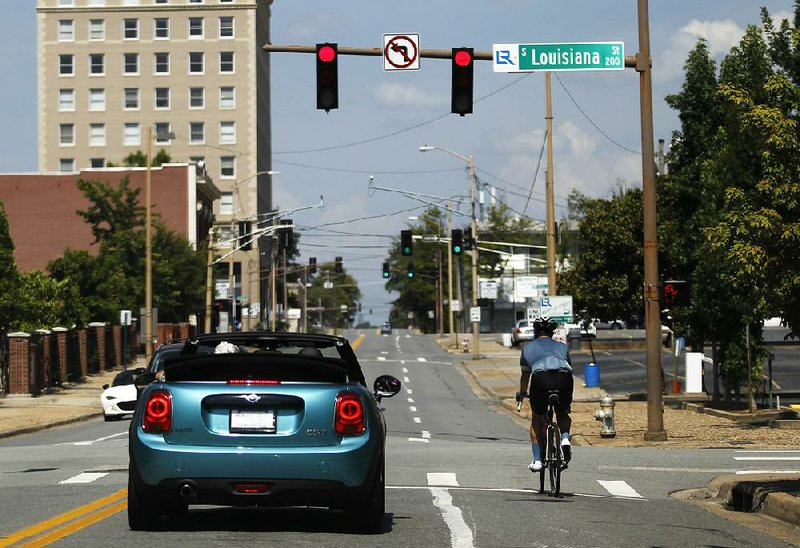 A cyclist and a car share the road Saturday at Louisiana and Third Streets in Little Rock. The city is embarking on the Friendly Driver Program to educate drivers and bicyclists on how to better share the streets.

Little Rock plans to implement a driver education program that leaders hope will promote safety as well as empathy for bicyclists and pedestrians.

The Friendly Driver Program is an education effort that likely will culminate in a 90-minute course on traffic laws, avoiding collisions and navigating infrastructure put in place for people on foot or on wheels.

The program will receive funding from a grant the city has received, the details of which will be announced publicly Wednesday. It will be modeled after a program Fort Collins, Colo., developed and started in December 2015.

The Friendly Driver Program is one way the city is working to improve biker and pedestrian safety on its streets. Central Arkansas got its first bike lane about a decade ago, said John Landosky, coordinator of the city's BikePed initiative.

The Little Rock metropolitan area, which includes North Little Rock and Conway, was rated the 14th most-dangerous metro area in the United States for walking in a 2016 study from Smart Growth America.

Each year in the region, an average of 144 pedestrians and 47 cyclists are involved in crashes with vehicles, resulting in an average of 107 serious injuries and 13 fatalities, according to the 2015 Central Arkansas Regional Transportation Study done by Metroplan, the region's long-range transportation planning agency. Those collisions account for about 12 percent of the total number of fatal crashes in the region.

Metroplan began incorporating pedestrian and bicycle safety into regional planning efforts in 2004. Little Rock hired a bicycle and pedestrian coordinator, then a part-time position, in 2013.

Landosky said the Friendly Driver Program aims to reduce frustration that can lead to road rage, which he said is a problem in Little Rock.

"Some of it is intentional, some of it is not," he said. "We've had drivers target bicyclists, so this program is very needed."

Teaching people things they might not otherwise know about bicycle traffic laws, such as how cyclists are allowed to take up one lane of a two-lane road with a double-yellow stripe and no bike lane, could help, he said.

"A lot of it is understandable," he said.

For Steven Barger, a neuroscientist and avid cyclist, a lack of awareness and sensitivity he had noticed in drivers peaked when he was knocked off his bike in an intentional hit-and-run in western Pulaski County in July 2017.

Barger, 53, said he noticed a driver behind him becoming aggravated as he slowed to climb a hill on Kanis Road. Moments later, another vehicle sped up behind Barger and hit him, leaving him unconscious with a concussion as well as a broken rib and collarbone.

It seemed clear that one driver had "called someone to come make a hit" on him, Barger said.

"That's certainly the most aggressive thing, but I've had plenty of people scream at me," Barger said.

Ed Levy, a member and former chairman of the Bike Friendly Community Committee, spoke in favor of an education program at the group's meeting on Wednesday.

Levy said he sees a stark difference in driver etiquette on either side of the Arkansas River. On his rides, he said, he often encounters vehicles outside the Clinton Presidential Center that park or idle in the middle of the trail.

"In North Little Rock, they never do that. They've clearly been trained," Levy said. "If they see a biker or pedestrian, they get off the trail."

Bike safety in Arkansas caught the attention of state leaders in 2012, when the League of American Bicyclists gave the state a last-place ranking for bicycle friendliness.

Arkansas now sits at 35th, lower than Missouri and Louisiana but higher than Mississippi and Oklahoma.

In 2009, North Little Rock became the first of four cities in Arkansas to receive a bronze award from the League of American Bicyclists for its efforts to make the city bicycle-friendly.

Little Rock received the same honor, one that Conway and Rogers also hold, in 2016. Fayetteville has a silver designation.

A 2016 report from the group showed Little Rock has 2.4 times as many car-bicycle collisions and 17.9 times as many bike fatalities compared with an average "silver-certified" city.

The city plans to hire a part-time program supervisor who will work 20 hours a week from August to December, as well as program teachers who can lead classes after 20 hours of training.

In November, the supervisor will write a report on the program's effectiveness.

After that, Landosky said, the program could be continued with a different funding stream and volunteers teaching the class, with the supervisor putting in five hours per week.

He said the program will first be aimed at high-impact drivers, such as the city's fleet drivers.

Businesses with drivers could be incentivized to take the class to avoid collisions and avoid a jump in insurance rates, he added.

Fort Collins now has about 4,000 bike-friendly drivers who have completed the course, said the city's bike program specialist, Jamie Gaskill-Fox. Cities in more than 40 other states have shown interest in starting their own programs, she said.

Gaskill-Fox said it was too soon to say whether the program is responsible for a decrease in traffic crashes involving cyclists and pedestrians, though those collisions have declined in the Colorado city since 2012.