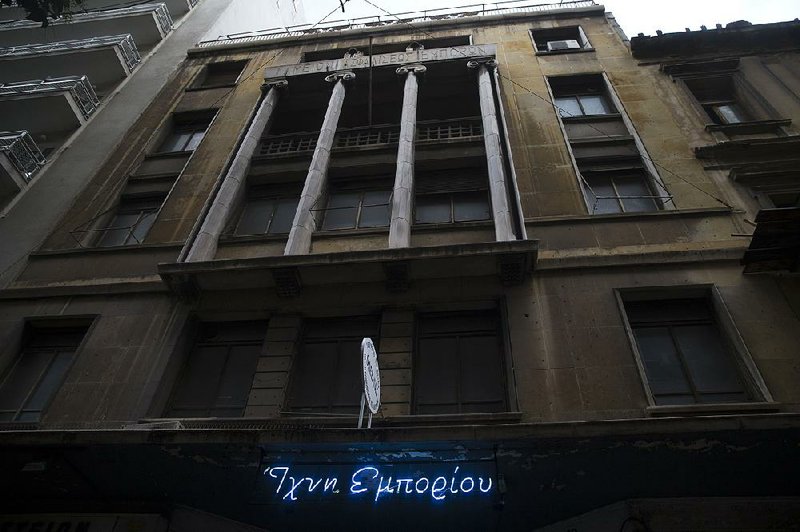 A 28,000-square-foot building from 1955, closed in 2006, is among the government-owned properties in Athens that Greece hopes to return to past glory.

ATHENS, Greece -- Greece is trying to revive some of its more material ghosts: Dozens of long-abandoned state properties in the heart of Athens are up for development, to improve public finances and revive the recession-battered capital's grimier parts.

They all belong to state pension funds, and instead of selling them cheap and fast, the government is looking at long-term rentals.

About 50 are on the current list. Many are striking edifices in Athens' old commercial center, whole sections of which were killed by unchecked immigration, riots and Greece's financial crisis that spawned wastelands of empty, shuttered shops.

It's hard to imagine now, but the peeling walls once pulsated with life, from the grim existence of a bureaucracy processing unruly lines of supplicants awaiting a rubber-stamp of approval, to petty criminals up for trial and coffee-sipping lawyers in court attire.

Half have generated no income for years -- four decades in the case of the crepitating Prokesch van Osten house, built for Austria's ambassador in 1837 and later used as a music school.

A world apart stands a building already spoken for: A 19th-century gem in upmarket Kolonaki, gloriously restored by the Civil Servants' Joint Stock Fund. Two New York art dealers have rented it as a gallery attracting international art to Athens.

"We want to be at the beginning of the rebirth of this city," said French-born Eric Allouche. "It's a bet, but ... an emotional one too. So far, we had an excellent response."

In a prime real estate area off Syntagma Square is a 28,000-square-foot listed building from 1955, the marble entrance reeking of urine. It's still stuffed with a commerce fund's paper files, metal office furniture and bound board meeting minutes -- the mummified remains of Greek bureaucracy.

Empty since 2006, it's scheduled to be used by a state investment and trade promotion organization.

On a busy avenue between Syntagma and Omonia squares stands one of the city's few substantial late 19th-century buildings to survive brutal postwar development. Its warren of offices housed lawyers from nearby courts, most of which have relocated.

"In 2000, a thousand people came here every day. I sold 600 coffees daily," said Nikos Panagakos, who runs a coffee shop on the second floor.

"There was a six-month waiting period for lawyers to find an office here," he added. "The courts moved away, the crisis came. Now there are about 10 occupied offices."