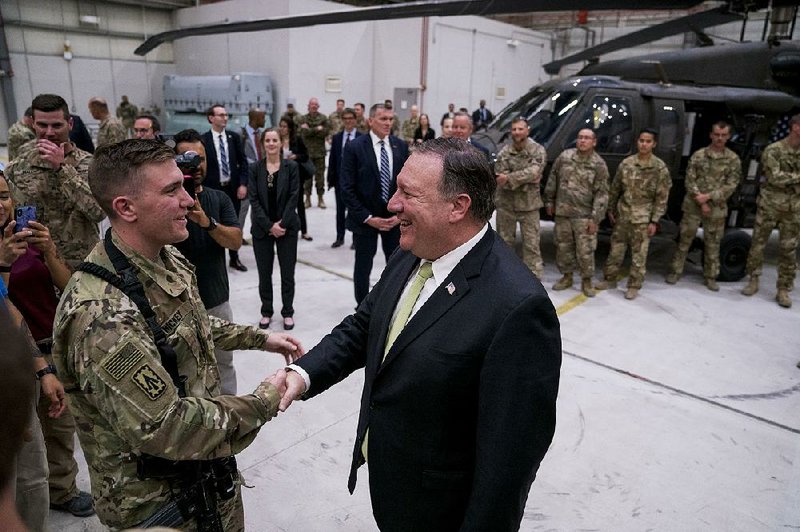 Secretary of State Mike Pompeo meets with coalition forces Monday at Bagram air base in Afghanistan.

KABUL, Afghanistan -- Secretary of State Mike Pompeo, making an unannounced stop in the Afghan capital Monday, said his brief visit showed him that the U.S. strategy of maintaining an active military role, while setting conditions rather than timelines for success in the war against Taliban insurgents, "is indeed working."

Pompeo, who spoke at a news conference with Afghan President Ashraf Ghani, reiterated that Washington will participate in a peace process initiated by Ghani last month, when he announced a unilateral cease-fire. The truce was observed peacefully by the Taliban for three days, sparking nationwide hopes for progress in settling the 17-year war.

However, Pompeo said that while the United States is "prepared to facilitate" negotiations, they must be led and conducted by Afghans.

"The American role will be important in this," he said after his meeting with Ghani and Chief Executive Abdullah Abdullah. But he added: "We can't run the peace talks; we can't settle this from the outside."

The secretary did not repeat his statement during the June cease-fire, when he said the administration would be willing to discuss a variety of insurgent concerns, including the future role of U.S. troops in Afghanistan. A key Taliban demand for holding talks has been the removal of all foreign troops.

While saying that U.S. officials were "very encouraged" by the cease-fire and the enthusiastic response to it from the Afghan public, Pompeo also suggested that "many of the Taliban now see that they can't win on the ground militarily" and thus might be persuaded to join the peace process without dramatic U.S. concessions.

Pompeo told reporters: "The region and the world are all tired of what are taking place here in the same way that the Afghan people are no longer interested in seeing war."

The U.S. strategy of stepped-up military engagement has "sent a clear message to the Taliban," he said. "They cannot wait us out." However, since rejecting an extension of the cease-fire offered by Ghani, the insurgents have returned to a campaign of aggressive attacks, especially in strategic areas of the countryside.

Pompeo met with U.S. troops at Bagram air base north of Kabul before continuing his trip, which will take him to Brussels for a NATO summit that is expected to discuss future foreign troop levels and engagement in Afghanistan. Before that, he spent several hours meeting with senior Afghan and U.S. officials on his first visit to the country as secretary of state.

Ghani thanked Pompeo for the ongoing U.S. commitment to Afghanistan and pledged to hold free and fair elections in the coming months. A parliamentary election is scheduled for October, and a presidential contest is set for next year, when Ghani is expected to run for re-election.

The Afghan president also said his government was strongly committed to improving conditions and that the successful cease-fire has "given hope to the people that in Afghanistan, yes, we are moving."

Pompeo arrived in Kabul after visiting Vietnam. From Afghanistan, the former congressman and CIA director headed to the United Arab Emirates for talks with UAE leaders on matters such as the war in Yemen and regional concerns about Iran.

The secretary's visit, made under strict secrecy, came at a moment of both dawning hope and resurgent challenges for Afghanistan. The conflict continues to produce record-level civilian casualties, and insurgents continue to hold sway in many areas of the countryside, where in some cases they have set up parallel mini-states.

The outpouring of celebration and reconciliation that swept cities and towns during the brief cease-fire, with Taliban fighters embracing government troops and civilians tearfully begging them to stop fighting, made it clear that the entire nation is bone-weary of the protracted war and desperate for peace.

But even as Afghanistan's leading Muslim clerics declared the war to be un-Islamic, the Taliban brusquely ended the truce June 17, ignoring Ghani's unconditional offer to continue it with various inducements. Instead, the insurgents swiftly took up arms again, dampening the hopes that had just been generated.

Hopes for a fresh start with Pakistan, a key player in reviving the long-stalled peace process, also did not seem to bear fruit.

In addition, a spate of recent suicide bombings and other attacks claimed by the Islamic State -- including twin bombs that killed nine Afghan journalists, another that killed more than 50 people waiting for voter ID cards, and two deadly bombings of reconciliatory gatherings during the truce -- highlighted the ongoing separate threat by the extremist Sunni militia that is far more violent than the Taliban and much less connected to the fabric of Afghan life. 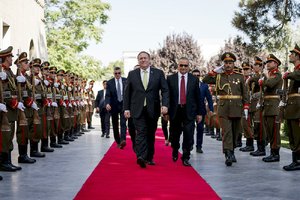 Photo by AP/ANDREW HARNIK
Secretary of State Mike Pompeo (center) is accompanied by Afghan Chief of Staff Abdul Salam Rahimi as he arrives Monday at the presidential palace in Kabul. After meeting with Afghan leaders, Pompeo said the U.S. will join in the effort to make peace with the Taliban but that Afghanistan must take the lead in negotiations.