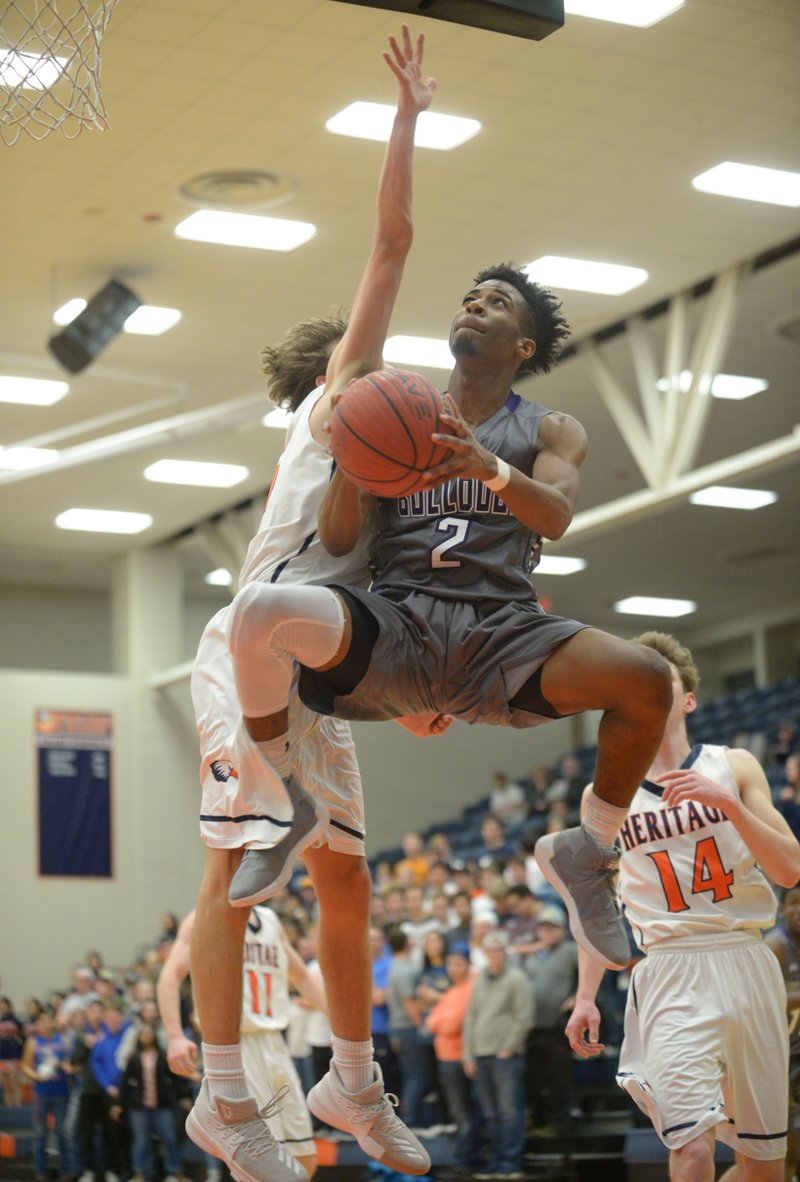 Fayetteville’s Jon Conley (2) goes up and under Rogers Heritage’s Logan Clines (left) on Tuesday at War Eagle Arena in Rogers. Visit nwadg.com/photos for more photos from the game.

ROGERS — Rogers Heritage sliced an 11-point fourth-quarter deficit to one, but Fayetteville had the final answer Tuesday night in War Eagles Arena.

The Purple Bulldogs hit seven of eight free throws in the final 62 seconds to claim a 54-48 win and remain in a three-way tie for first place in the 7A-West Conference.

Dawson Peek’s three-point play pulled Heritage (15-5, 4-3 7A-West) within 45-44 with 1:26 left in the fourth quarter, but Fayetteville was deadly from the foul line to push the War Eagles out of a logjam at the top of the league.

Fayetteville, Bentonville and Springdale Har-Ber finish the first round of league played tied for the top spot.

Senior Jon Conley answered Peek’s play with a driving layup and Heritage turned the ball over on the ensuing possession. Fayetteville (12-7, 5-2) then put the game away from the foul line.

The Purple’Dogs also limited a patient Heritage team to 46 percent shooting (16 of 35), after it shot over 70 percent from the floor and got many easy shots in a 10-point win over Springdale Har-Ber on Friday.

“I thought defensively, especially the first half we were as good as we’ve been all year long,” Adams said. “I’ve said this to many people. I’ve never said it publicly, but I think Quinn Schach’s the best defender in our league, maybe in the state. Just competes every possession, every pass, every bounce. The guy just buys in and does what he’s supposed to do.”

Senior Collin Cooper scored a team-high 16 points, including six-of-six from the foul line for Fayetteville. Conley was also in double figures with 12. Fayetteville also made 16 of 20 free throws for the game and enjoyed a 32-20 rebounding advantage.”

Peek led all scorers with 18, while Bryce Breedlove added 10 for Heritage.

Fayetteville used a 14-3 third-quarter run to turn a four-point deficit into a 33-26 lead. Frank Morgan’s 3-pointer at the third-quarter buzzer pushed the lead to nine and Schach scored his only points of the night for a 39-28 advantage with 7:19 left.

Heritage coach Tom Olsen said Fayetteville had an answer for his team late, particularly from the free-throw line.

“We needed them to miss in that situation,” Olsen said. “Everybody that knows basketball understands that. They made their free throws.”

Tylor Perry scored eight of his 18 points in the fourth quarter to lead Har-Ber past the Wolverines.

West (14-6, 4-3) led 43-37 late in the third quarter before Perry scored eight consecutive points on two free throws and two 3-pointers. Har-Ber led 64-60 after a free throw by Perry and a dunk by Austin Garrett.

West got to within 64-63 on a three-point play by Collin Blackburn. But Har-Ber (16-5, 5-2) kept the lead with the help of two free throws by Nick Buchanan with 18 seconds left.

Michael Shanks’ jumper from the free-throw line just before the buzzer sounded gave Bentonville a win over Springdale and allowed the Tigers to maintain their share of first place in the league standings.

Trentez Scales hit one of two free throws to tie the game with 19.7 seconds seconds, and Springdale (12-8, 3-4) — which had four fouls to give before putting Bentonville to free-throw line — fouled Shanks twice, the final time coming with 6.7 seconds left. Shanks took the inbound pass from Cadarius Baggett near midcourt, drove past his defender and drilled the jumper.

Asa Hutchinson scored 15 points to lead Bentonville (13-5, 5-2) before fouling out with under 3 minutes remaining, while Shanks added 12. Scales was the only Springdale player in double figures with 14.

Van Buren was able to pick up a conference victory at home and snap a three-game losing streak, but Rogers High didn’t make it easy.

Jordan West made two free throws with 21 seconds left in the fourth quarter to take the lead, and Van Buren (11-9, 2-5 7A-West) was able to hold on for the win.

That gave Rogers (7-13, 0-7) the ball with five seconds left. The Mounties got three shots off under the basket but couldn’t get one to fall

West finished with a game-high 19 points for Van Buren to lead the way. Presley Kindrix added 14 for the Pointers.

Rogers High’s Jake Early and Elliot Paschal each had a team-high 10 points to pace the Mounties.

FULL GAME REPORTS ON THESE 7A-WEST GAMES CAN BE FOUND AT NWADG.COM .