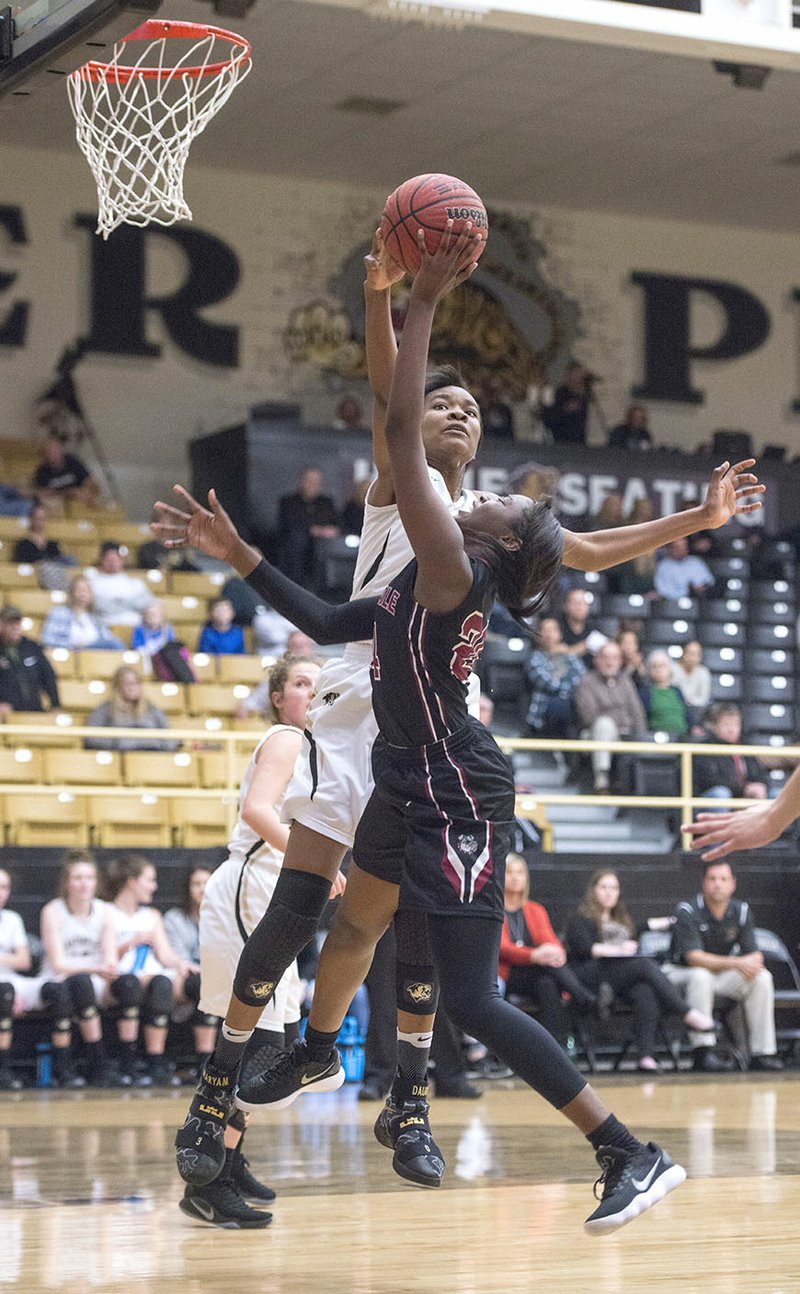 BENTONVILLE -- It could have marked trouble for Bentonville High's girls when Maryam Dauda picked up her fourth personal foul in the third quarter and Springdale High had cut the Lady Tigers' lead to seven moments later.

Bentonville, however, turned the tables at that point with a 17-2 run and went on to post a 58-38 victory over the Lady Bulldogs during 7A-West Conference action Tuesday night in Tiger Arena.

The win, coupled with Rogers High's loss to Van Buren, gives the Lady Tigers (16-4, 5-2) sole possession of second place in the league standings at the halfway point.

"I was really pleased with that effort," Bentonville coach Tom Halbmaier said. "Fess Hawkins went in and played the middle, and Emma Palasak came in and played very well. She was very active and played the wing and the baseline, and she had two really two good assists that led to scores."

Bentonville led 30-21 at halftime and opened the second half with Avery Hughes' 3-pointer before Springdale (13-7, 4-3) answered. Olivia James nailed a 3-pointer, then Ashlyn Minchew hit two free throws to make it a 33-26 game shortly after Dauda picked up her fourth foul with 4 minutes, 45 left in the third quarter.

The Lady Tigers then scored 14 of the next 16 points to blow the game open, with Hughes' two free throws with 3.2 seconds left making it a 47-28 game to end the third quarter. Jaren Hernandez then continued the run with a 3-pointer to start the fourth, and Bentonville took its biggest lead when two Hawkins free throws made it 56-33 with 3:15 left.

"I was really pleased with that adjustment," Halbmaier said. "It was nice to figure out when Maryam is out that we can still compete hard and the girls just play within themselves."

Hughes scored 11 of her 14 points in the third quarter, while Hawkins had 14 and Dauda 11 for Bentonville, which has won five straight league games by double digits after an 0-2 start.

The Lady Purple Bulldogs held Heritage to just seven points through three quarters and scoreless in the third to remain undefeated in the 7A-West Conference.

Har-Ber rallied from an eight-point deficit in the first half to defeat Bentonville West at home.

Savanna Collins made four 3-pointers and finished with 16 points to lead the comeback for Har-Ber (11-10, 3-4). Maci Mains and Krislyn Smith added 13 points each for the Lady Wildcats, who outscored West 18-12 in the fourth quarter.

Van Buren was able to snap a three-game losing streak but had to do so after losing a starter early in the game Tuesday night at Clair Bates Arena.

Junior forward Kayleigh Evans, the team's leading scorer in the previous game, left with an injury, but Van Buren was able to pull away.

Van Buren (12-7, 4-3 7A-West) took a 22-18 lead heading into the break with senior Ira Sandoval providing a spark on offense. Sandoval had a team-high six points in the second quarter after not scoring in the first quarter.

Jamilyn Kinney had a game-high 18 points, while Sandoval added 14 with nine rebounds.

Ally Figenskau had a team-high 14 points, including eight in the first half, for Rogers (11-9, 4-3). Madison Loyd also chipped in 12 points for the Lady Mounties.