March on anniversary of Trump’s inauguration focuses on variety of issues by Ashton Eley | January 21, 2018 at 1:00 a.m. 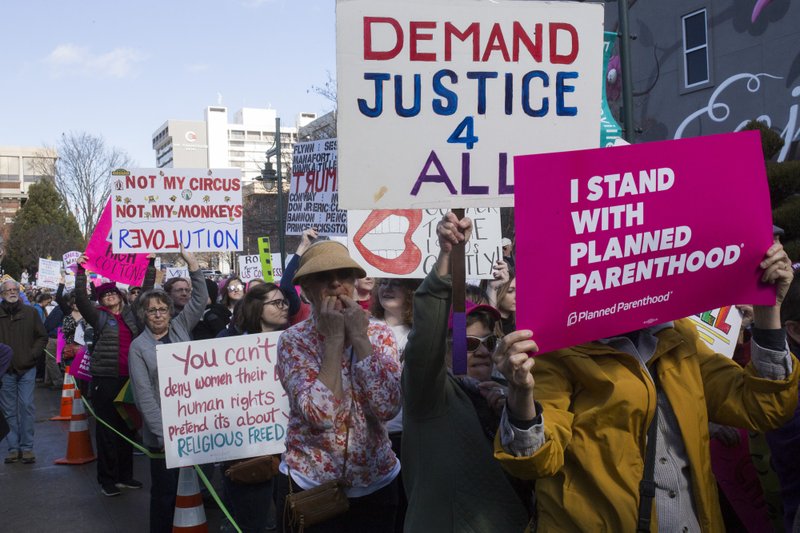 Supporters gather Saturday holding signs during a rally at Fayetteville’s Town Center. Supporters commemorated the anniversary of the Fayetteville Women’s March with inspirational speakers. Later the group marched east down Mountain Street and up College Avenue to the Fayetteville Library.

FAYETTEVILLE — A nearly block-long crowd marched from the city’s Town Center to the public library Saturday afternoon in solidarity with Women’s March events around the country and world seeking social change.

Nationwide demonstrations from Washington to Dallas to Los Angeles were planned for the anniversary of President Donald Trump’s inauguration. Protesters also were coming out in France, Germany, Greece, Iraq, Nigeria and Ghana, according to reports.

“We had a demonstration last year, but it wasn’t quite a full-blown event. So, we wanted to take the enthusiasm our local women had and continued to have and get us all together, get energized and learn from our speakers,” said Olivia Trimble, one of the event’s organizers. “Specifically in Fayetteville, I think that we have a city that champions everyone’s rights. We are a community and our job is to bring everyone up and move forward in unity.”

Blanca Estevez, another event organizer, said they wanted to tailor it to the Northwest Arkansas community, focus on the area’s most marginalized communities and “make sure women of color are speaking and reclaiming their time.”

“We must see and act the realities of all women,” said Raven Cook, educator and founder of Foundations: Black History Educational Programming. “To walking away from this march and remain silent, is to be part of the problem.”

The event organizers took specific strides to make the event accessible to all, making sure a lane was kept open in the crowd at the Town Center for those in wheelchairs.

Caitlin Wood, a writer and activist who is disabled, spoke about the systemic oppression and invisibility of disabled people and that access is a fundamental justice issue.

About 19 percent of the nation’s population has some kind of disability, according to the U.S. Census Bureau.

Speakers addressed many other national issues, including deportation and immigration and racial and gender discrimination. Each brought her distinct voice and a local lens to the topics.

“Our similarities are more than our differences,” said speaker Evelyn Rios Stafford, an Emmy winning journalist and Northwest Arkansas Equality Board member.

The marching started about 2 p.m. with signs held high and chanting that could be heard from Dickson Street.

Fayetteville resident Shawna Woodson walked with her daughter in the 2nd grade, while pushing her youngest in a stroller.

“I need to march to show this one you need to fight if you want anything to change,” Woodson said, looking at her daughter.