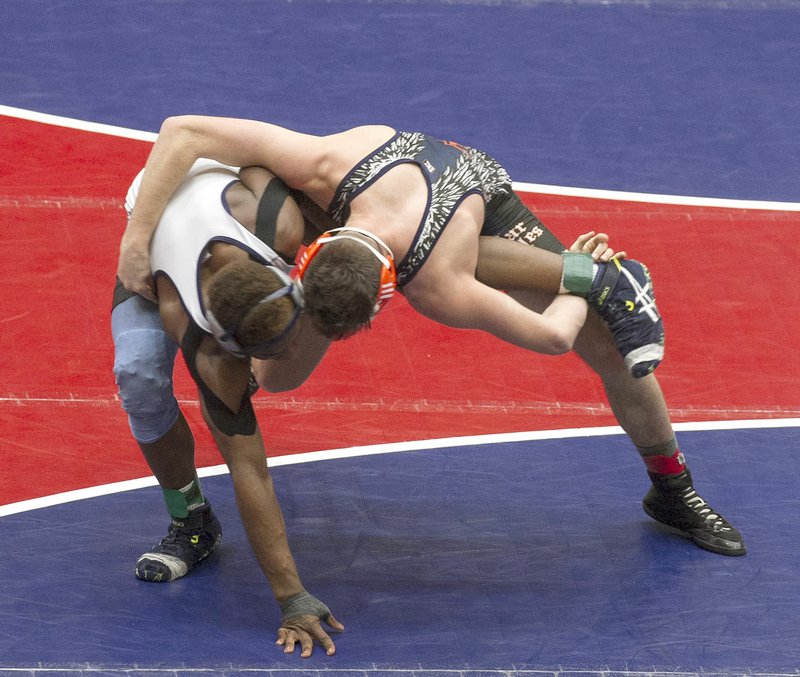 Chance McCrary missed a couple of tournaments before Christmas, while competing for the Rogers Heritage cheer squad. But he doesn't look to be behind at all.

"He had a couple tough matches, but never was in in really big trouble in any of them," Heritage coach Doug Freeman said. "I think one of the other coaches of a kid he wrestled said 'He just doesn't make any mistakes.'

"He didn't blow everybody off the mat, but he's just so solid. He won a match in one of our duals on Friday 1-0. He beat a state qualifier. He got an escape and rode him out for a period."

McCrary is off to a 27-2 start and eclipsed the Heritage school record for career wins. He passed Shae Chafin's total of 148 and currently stands at 157 and counting.

But Freeman is quick to point out McCrary is in his fourth season as a varsity wrestler, while Chafin only had three.

Freeman said he wasn't sure whether McCrary would defend his title at 152 or bump up to 160 where he won at Fayetteville's Crain Automotive tournament and was the outstanding wrestler in the upper weights. He finished second at 160 in the tough Kinloch Classic in Springfield, Mo., after Christmas.

Nic Carbajal (15-10) picked up a surprising second-place finish at 126 in Republic, too. The junior wrestled tough and fought his way into his first tournament final.

"It wasn't the toughest bracket there, but that doesn't take anything away from his wrestling," Freeman said. "He's always been a battler. But that's the best I've seen him wrestle. Last year, I think he was the hardest kid to pin on the team. He battles his tail off.

"He's got some good skills. His biggest issue has been not finishing."

Marcus Totorello (28-9) has come a long way in a year's time on the mat in it showed last weekend in Branson, Mo.

The junior advanced to his first tournament final before losing in the championship match at 220 pounds. That's quite an improvement, Fayetteville coach Nika West said.

"A year ago, he finished second to last in the same tournament," West said. "He's starting to pick up some things and be confident with his movements on the mat. I think the final he was a little star-struck. It was unfamiliar territory, but it was good for him. He wrestled well though in the tournament against some good competition."

Teammate Matthew Muller continued his solid wrestling with a third-place finish at 182. He's now medaled in every tournament this season, West said.

The Tigers took second overall in the Branson (Mo.) Invitational, finishing behind only Missouri power Neosho in the event which included 16 varsity teams.

Jones, who suffered his lone loss of the season in Springfield, Mo. in late December, pinned his way through the tournament over the weekend to improve to 38-1. The only match that's gone the distance this season is his lone loss.

Desler (39-4) won by fall in the finals and has come into his own this season, Rappe said.

"Nathan's really bought into what we're trying to do and I've watched him develop as a young man over the past two seasons," Rappe said. "He's taken on leadership roles and met those obligations with integrity.

"He's worked hard and done things he's supposed to do and we are seeing the fruits of those labors."

Alex and Ethan Crowe finished fourth and fifth, respectively. But Rappe also likes the progress both are making coming from football.

"They are starting to dial into what we've been working on and putting themselves in position to be successful at the end," Rappe said.

The Wolverines finished fourth over the weekend in Catoosa, Okla., but also likely lost Walker Fox for the season to an injury.

The sophomore, who was second in 6A-7A at 113 last year, will require surgery and is likely done for the season, West coach Aaron Wise said.

Wise is hopeful of getting freshman Jake Adams back from injury in a week or so. Adams will be a state title contender at 120, if healthy. Senior Stephen Fox turned in another great weekend, finishing second at 132. He lost a tough 3-2 match to a defending state champion from Oklahoma.

Wise said Stephen has proven himself to be able to compete against good competition from out of state, after his strong finish at Catoosa and win at Monett, Mo. He knocked off a defending Missouri state champion to win the tournament two weeks ago.

"Losing in the state finals last year had a big impact on him," Wise said. "It really got him focused on wrestling and he dedicated himself in the offseason and I think that extra work and focus has made a big difference for him."

Nathan Hahn was an undersized freshman competing a bigger weight class a year ago. The sophomore has matured both physically and on the mat and it's showed in the results this season.

Hahn (29-3) won the 170-pound weight class last weekend at the Cabot Pools tournament, knocking off Cabot's Ryan Tillery, who was fourth in the Class 6A-7A state tournament a year ago, in the finals.

He was certified at 138 a year ago, but wrestled at 152 for the Mounties. Rogers coach Ken Simmons said he's obviously exceeded preseason expectations, after going 30-30 last season.

"Technique-wise, he's done a good job," Simmons said. "He's gonna make mistakes, but he's not scared to try things. He's pulling the trigger and getting good results because of it."

"He's turning the corner and wrestled a real close match with the Searcy kid in the semifinals and got caught," Simmons said. "There were three of the top five guys in the state in his weight class at Cabot. He also beat the Fry kid from Bentonville, who was ranked, 9-2."