Patriots ahead for upstart Jaguars 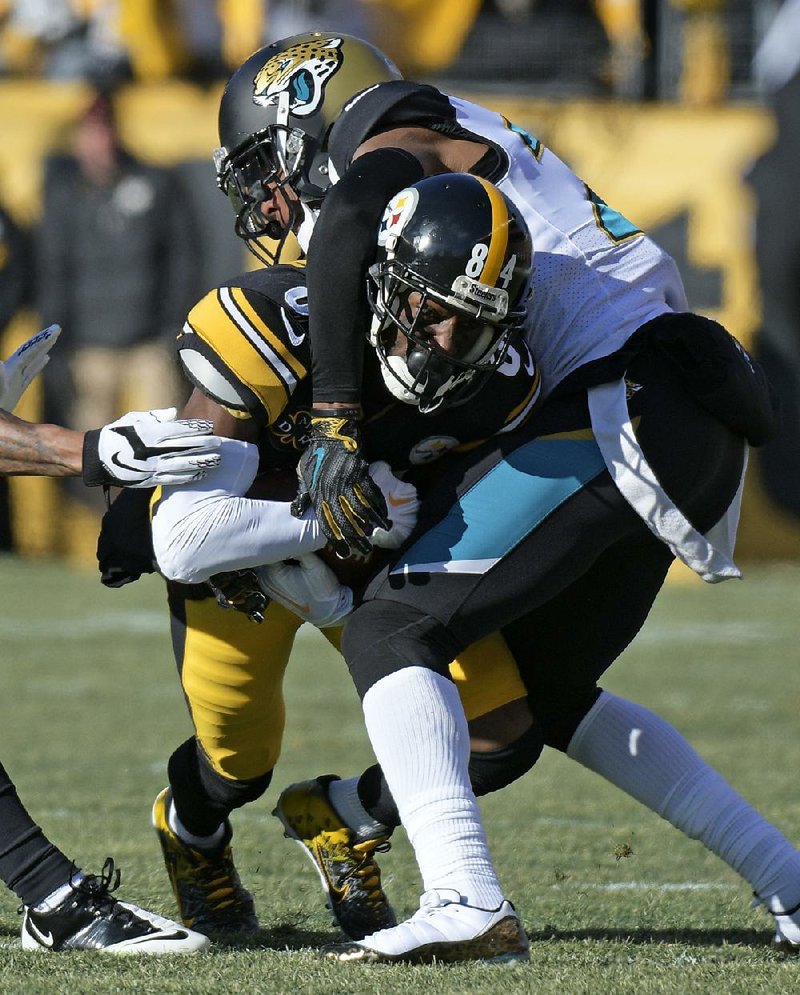 Jacksonville Jaguars cornerback Jalen Ramsey tackles Pittsburgh Steelers wide receiver Antonio Brown (84) as Brown makes a catch during the fi rst half Sunday in Pittsburgh. Ramsey said the Jaguars “are going to the Super Bowl and we are going to win [it].”

He started looking ahead.

Ramsey told thousands of fans awaiting the team's return from Pittsburgh late Sunday that the Jaguars "are going to the Super Bowl and we are going to win [it]."

Jacksonville, of course, has the AFC Championship Game at New England remaining before even getting to the Super Bowl. The small-market franchise is winless in seven games in Foxborough, Mass., and 1-10 all-time against the Patriots.

"You come back and you've got all the fans here and things of that nature," Jaguars Coach Doug Marrone said.

"Obviously that's something that everybody, they want to do when you get close. Whether you have to say it or not? The one thing I do know is the road to it always leads through New England.

"Our focus isn't on anything else but the New England Patriots. It will be a great challenge for us obviously."

The Jaguars took exception to the Steelers talking about facing the Patriots instead of them, and used it as motivation in a 45-42 victory Sunday.

Nonetheless, they stood behind their outspoken and ultra-talented defender.

"To me, it's just a man that has confidence in his team," defensive tackle Abry Jones said. "What's he going to say? He knows what we're going up there to do. It's not like he ain't saying nothing that's not true."

"We're so close that I think it's OK to say, 'Hey, we're going to do this,'" Jackson said. "It's one of those things that I think he believes in himself after the game he just had, locking down one of the best receivers in the game.

"He's pretty hyped and he wants to let everybody know he's hyped, so I think he's just happy and he understands that we have a giant in front of us and we've just got to pay all the attention to this team.

"We don't even know who's going to play in the Super Bowl because we're not looking ahead to that."

"He's going to talk, but we're going to show up," defensive end Yannick Ngakoue said. "I just don't like when people talk all week. You talk reckless and you lose."

The Jaguars voiced their displeasure with being overlooked by the Steelers last week and were really vocal after the victory at Heinz Field. Players yelled, "Where's Mike Mitchell at now" as they came off the field.

"I feel like they took us lightly. I don't know why because we whooped them the first time," Ngakoue said. "You've got to respect all your opponents. That's why we're not big in trash-talking. We're big in playing on Sunday.

And now they have a matchup against the NFL's most successful franchise over the past two decades.

The Jaguars are 1-3 against New England in the postseason, with the lone victory coming after the 1998 season -- before coach Bill Belichick and quarterback Tom Brady teamed up to take five Super Bowl titles.

The Jags are 0-7 against the Brady-Belichick combination.

"We're not going to go out there like the Steelers the week before and talk about people in a bad way and give them bulletin board news," Jackson said.