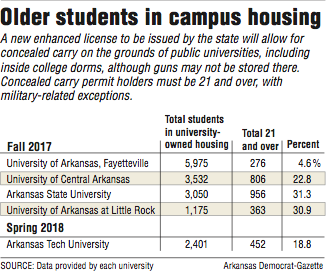 Students in campus housing at the state's public colleges and universities will soon be living with the prospect of sharing a residence with armed classmates. The state's expanded concealed-carry law raises new questions for school leaders and campus communities when it comes to housing.

The law prohibits license holders from storing guns in a dorm room, leaving schools to decide on protocols for handling any storage violations by students. Schools must also decide how to deal with any requests for room changes from students uncomfortable with having a roommate carrying a handgun.

State lawmakers last year greatly expanded concealed carry for those who go through training to receive what's known in Arkansas as an enhanced license. None have yet been issued -- a required exam for firearms instructors could be offered for the first time this month, an Arkansas State Police spokesman said -- but enhanced license holders will be allowed to carry handguns in many public facilities that previously had been off-limits.

While most students in campus housing will be too young to obtain a license, some schools have a significant percentage of older students living on campus.

At Arkansas State University at Jonesboro, more than 30 percent of the school's 3,050 students in university housing this past fall were 21 or older, according to data provided by the school.

The state requires applicants for a concealed-carry license to be at least 21, with military-related exceptions.

"I spent the afternoon with them, and we talked through a lot of it, and I was asked some really good, informed questions," Phelps said.

Many questions involved various hypothetical scenarios and how to respond appropriately, Phelps said. He said he emphasized to housing staff members that "the new law did not make them law enforcement officials."

Should staff members see a weapon lying around a residence hall, "the campus police or campus security are the appropriate ones to help deal with it," Phelps said.

The university has "initial hearing officers" who review student conduct complaints, which can then result in a hearing and possible disciplinary action, according to online information about the school's student conduct policy.

Phelps added that the student conduct officers "really try to take into account the facts and circumstances leading to the violation in an attempt to both understand why something happens and also ensure that the violation doesn't happen again."

Storage is allowed in the licensee's "own locked and unattended motor vehicle in a publicly owned and maintained parking lot," the university's online information states.

At the University of Central Arkansas, Christina Madsen, the school's associate vice president for communications, public relations and marketing, in a written statement noted that "there are criminal penalties for violating the campus-carry law."

The law allowing campus carry, Act 562, states that "storage of a handgun in a university or college-operated student dormitory or residence hall is prohibited under" a different section of state law.

That section of Arkansas law, 5-73-119, refers to general prohibitions on handgun possession on school property. Unless allowed by concealed-carry laws, violating the prohibition is a Class D felony.

Such felonies upon conviction carry a punishment of up to six years in prison and a fine of up to $10,000.

Madsen went on to say that when it comes to a student violating the concealed-carry law, disciplinary action could include dismissal from the university.

For firearms instructors, "the first test will probably be administered by the end of the month," state police spokesman Bill Sadler said.

Instructors would likely know the results within 48 hours, he said.

Those who pass would then be able to offer the new enhanced training, which will consist of approximately eight hours of instruction -- five to six hours of classroom training plus up to two hours of firing range qualification -- according to state police rules.

While it may only be a few weeks before enhanced training is offered, some school officials in response to questions from the Arkansas Democrat-Gazette said they were still awaiting details of the required training.

"At this point, no one wants to speculate on how policies will be written and implemented across campus until we know details of the enhanced training requirement and get guidance from UA System," Tracy Courage, news director for the University of Arkansas at Little Rock, said in an email. UALR is one of six universities in the UA System.

Phelps said that Arkansas State University at Jonesboro has a process for handling student requests to change rooms.

"This just hasn't come up yet," Phelps said when asked about how the university would respond to a student seeking to change rooms upon discovering that a roommate carries a handgun.

Information about who has a permit is not considered public.

"The identity of concealed-carry licensees is confidential," Fredricka Sharkey, the University of Central Arkansas' media relations director, said in an email, adding that the university "cannot guarantee" that a student's roommate won't obtain an enhanced-carry permit.

Arkansas is one of 10 states to allow concealed weapons on some or all public campuses, according to the National Association of Student Affairs Professionals.

The Arkansas law differs from what's in place in some nearby states.

In Kansas, for example, no specific license is required for those 21 and over to carry a concealed handgun. On the University of Kansas campus, guns can be stored inside a student residence.

This past fall, 276 students 21 or older lived in campus housing at the University of Arkansas, Fayetteville, about 4.6 percent of all students in university-owned housing.

UA freshman Christine Prichard, 19, said in a written message that she saw no problems with the law as long as license holders are trained and certified.

She added that if students are licensed to carry a handgun, "they should be able to keep it wherever they want as long as they're being safe."

Peggi Farrell Stewart, in a written message, said her son Quinn is a freshman living in UA campus housing. She opposes the law.

At John Brown University, a private Christian university in Siloam Springs, Michael Lane, 21, said he would be interested in obtaining an enhanced carry license if he attended a public university.

The expanded concealed carry law does not apply to private colleges and universities, which can continue to ban concealed weapons.

"I think that it provides more security and protection for myself and others," Lane said. But he said he agreed that guns should not be allowed to be stored inside dorm rooms.