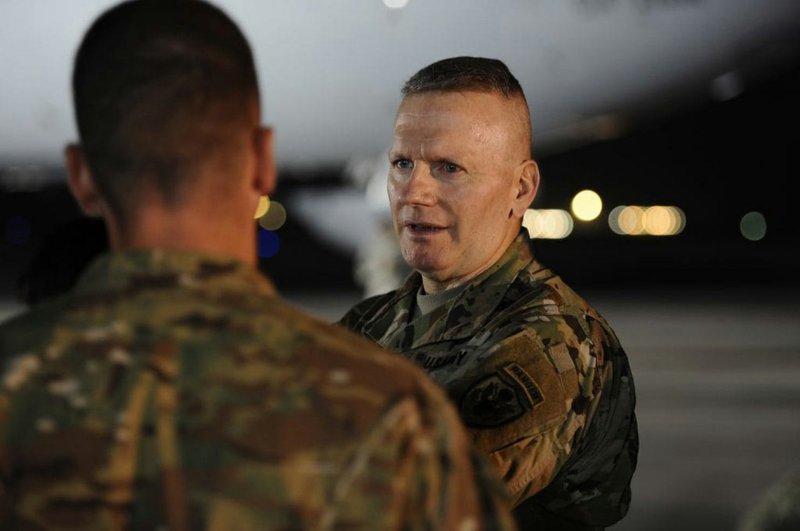 US Army Command Sgt. Maj. John Wayne Troxell, the senior enlisted adviser to Gen. Joseph F. Dunford, the chairman of the Joint Chiefs of Staff, speaks on the flightline of Al Dhafra Air Base in the United Arab Emirates on Dec. 22.

The Pentagon's senior enlisted service member has issued a blunt warning to Islamic State fighters, saying in new social-media posts that they can either surrender or face death in a number of forms, including being beaten to death with steel entrenching tools.

Army Command Sgt. Maj. John Wayne Troxell, the senior enlisted adviser in the Pentagon, issued the warnings on Facebook and Twitter. Senior U.S. officials, including Defense Secretary James Mattis, have warned Islamic State fighters for months that they must lay down their weapons or face annihilation, but Troxell's message was unusually forceful.

"ISIS needs to understand that the Joint Force is on orders to annihilate them," Troxell wrote on Facebook, using an acronym to refer to the extremist group. "So, they have two options should they decide to come up against the United States, our allies and partners: surrender or die!"

Troxell added that the U.S.-led military coalition will provide militants who surrender with safety in a detainee cell, food, a cot and legal due process.

[THE ISLAMIC STATE: Timeline of group’s rise, fall; details on campaign to fight it]

"HOWEVER, if they choose not to surrender, then we will kill them with extreme prejudice, whether that be through security force assistance, by dropping bombs on them, shooting them in the face, or beating them to death with our entrenching tools," Troxell wrote. "Regardless, they cannot win, so they need to choose how it's going to be."

The posts were published Tuesday night along with a photograph of an entrenching tool -- a collapsible shovel used by U.S. troops.

It isn't the first time that Troxell has issued a warning along those lines. He used the same talking points during a United Services Organization holiday tour last month in which he and his boss, Marine Gen. Joseph Dunford Jr., the chairman of the Joint Chiefs of Staff, visited deployed U.S. troops in numerous locations.

Video recorded by a Stars and Stripes reporter on Dec. 24 in Afghanistan shows Troxell delivering a speech to cheering troops as Dunford and Florent Groberg, a Medal of Honor recipient, looked on. Troxell, speaking from a stage, said the Islamic State will be "annihilated, period!" before he went into specifics.

"That may be through advising, assisting and enabling the host-nation partners," he said. "It may be by dropping bombs on them. It may be by shooting them in the face. And it even might be beating them to death with your entrenching tool, but we are going to beat this enemy!"

Air Force Col. Patrick Ryder, a spokesman for Dunford and the Joint Staff, said Troxell's comments emphasized the sincerity of the U.S.-led coalition's resolve to defeat the Islamic State over the past four years. Ryder noted the countless atrocities that the militants have committed against men, women and children.

"His intent was to communicate the tenacity of the warrior ethos that, even when faced with the brutal and unforgiving nature of combat, will use every resource available to fight and win," Ryder said of Troxell.

Print Headline: GI at Pentagon tells ISIS to quit or prepare to die