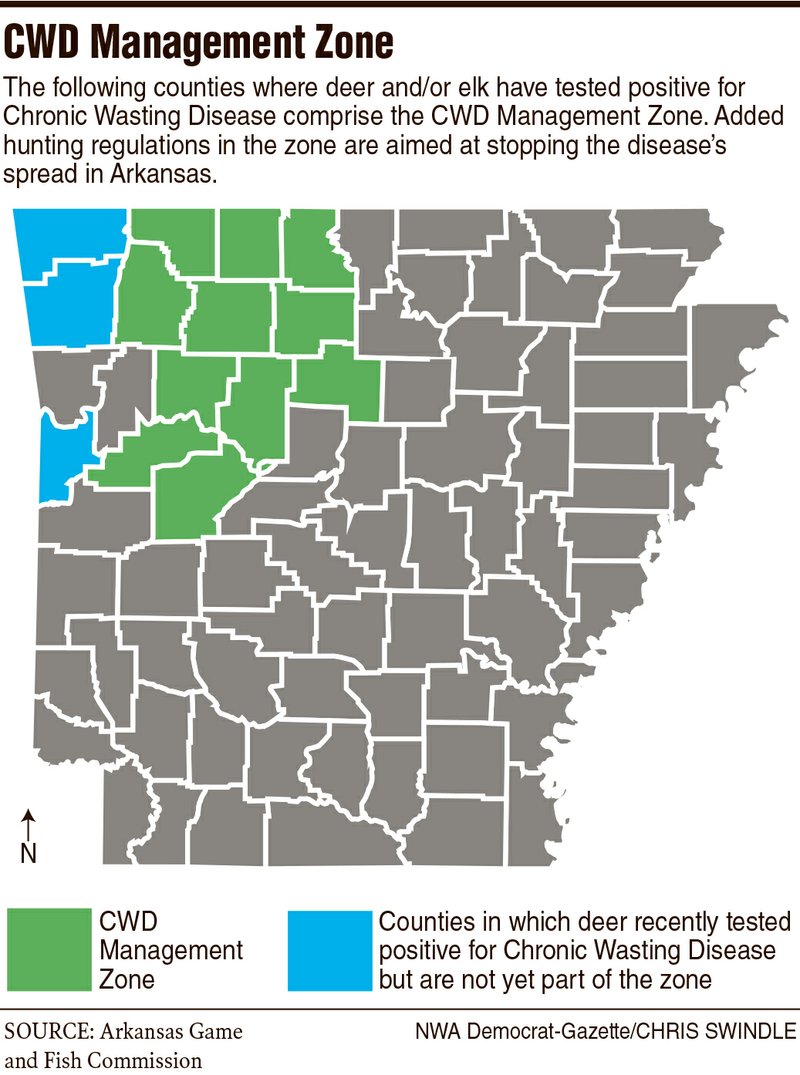 Chronic wasting disease in deer has been found in Benton, Washington and Sebastian counties.

The Arkansas Game and Fish Commission confirms two deer in Benton County tested positive for the disease, which is fatal to deer and elk. One deer in Washington County and one in Sebastian County also tested positive.

It’s unlawful to import, transport or possess any portion of a deer or elk from the Chronic Wasting Disease Management Zone to any location in the state outside the zone, except:

• Meat with all bones removed

Chronic wasting disease has been found among deer and elk in 11 Arkansas counties. The 11 counties comprise a Chronic Wasting Disease Management Zone set up by Game and Fish. Special deer hunting regulations apply within the zone.

Benton, Washington and Sebastian counties haven't been placed in the zone yet, but that will likely happen, said Mark Hutchings, a Game and Fish wildlife biologist. Hutchings works out of the agency's regional office near the Beaver Lake Dam in Carroll County.

"The point we're at now is making sure the test results are 100 percent accurate," Hutchings said. A test occasionally shows a false positive, he added. "This really is a surprise to us because the deer in west Benton County are so far from the CWD hot zone."

The nearest previous confirmed case of the disease is in northern Madison County. If it was going to turn up in Benton County, Hutchings expected it would be in eastern Benton County.

The positive deer from Washington and Sebastian counties also are far from previous confirmations.

Public meetings likely will be set up to answer questions from residents of the three counties. Dates haven't been determined.

Rick Sayre, a deer hunter from Cave Springs, said the confirmation isn't good news, but he saw a bright spot.

Sayre said he has permission to hunt some parcels of private land in Madison County, but he hasn't because the county is in the zone.

"It will open up more hunting areas for me," he said, because he can bring the whole deer home for processing.

The new confirmations "don't seem to bother me as bad" as when the disease was first confirmed in Arkansas, Sayre said. "They're going to keep finding it. The harder they look, the more they'll find it."

Larry Aggus, at Southtown Sporting Goods in Fayetteville, said the disease has been around other parts of the country for a while, and people in those areas seem to have adjusted to it. The disease is relatively new to Northwest Arkansas, and hunters seem apprehensive, he said.

"As far as business, it creates an uncertainty. I think it's led to a decline in deer hunting in this part of the state, and this is at a time when the deer population is very large. There are deer everywhere," Aggus said.

"At this point my position is to just wait and see, but I think it has had a negative impact on hunting. I think it will reduce the amount of hunters, I just expect that."

The disease infects deer, elk, moose and similar animals, known as cervids. It's almost always fatal, causing the animal to lose weight, become listless and have difficulty moving. It was first documented among captive mule deer in Colorado in 1967 and has been detected in 24 states and two Canadian provinces, according to Game and Fish.

The disease isn't known to infect people who eat meat from positive cervids, but Game and Fish discourages people from eating meat from a positive deer or elk.

"We've said from the beginning it's a good idea for hunters to get their deer tested," Hutchings said.

Game and Fish operated testing sites in November during the modern gun deer season. Archery is the only deer season open now. Bowhunters who would like to have a deer tested can contact any Game and Fish office, Hutchings said. A tissue sample is taken from the deer and sent to a lab for testing. The test is free, he said.

Feeding deer is against the law in the 11-county management zone to prevent spreading the disease. Hutchings said residents of Benton, Washington and Sebastian counties shouldn't feed deer, though it's still legal, in the wake of the positive tests. Deer feeding concentrates deer and makes the disease easier to pass from deer to deer, he said.

Hutchings said Game and Fish would like to test more deer from the locations of the four recent positive sites. Participating taxidermists also can test deer. A list of those are on the commission's website.

The agency may issue depredation permits to landowners allowing them to kill more deer than the season limit so those deer can be tested, he said.