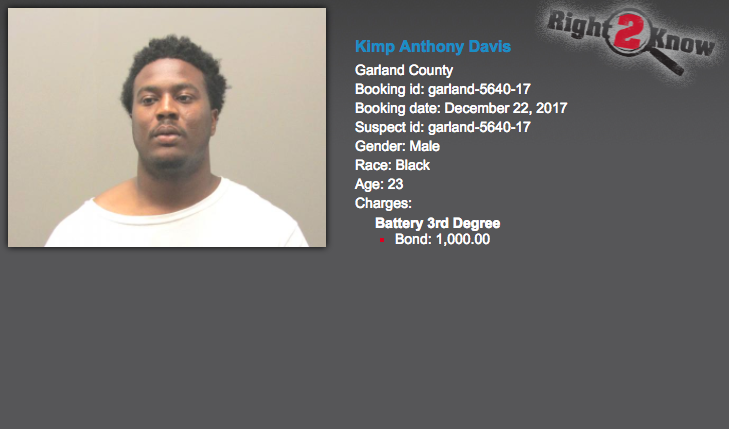 Kimp Anthony Davis, 23, who lists a Ridgeway Street address, was charged with three counts of second-degree battery, each punishable by up to six years in prison, and a felony charge of impairing the operation of a vital public facility, punishable by up to 10 years.

Davis was initially arrested Dec. 22 on a misdemeanor count of third-degree battery and was being held in lieu of $1,000 bond. With the new charges, his bond now totals $12,000. He remained in custody Tuesday.

Davis refused to appear in Garland County District Court on Monday morning, but a public defender was appointed to represent him and entered pleas of innocent to the charges. A felony review hearing to determine if the case will be bound over to Garland County Circuit Court is scheduled for Jan. 17.

Court records note that Davis is considered "a security risk."

Deputy Kyle Hecke said Davis was being held in the C-block when the flooding occurred.

Hecke said C-block is reserved for male inmates who require special supervision because of behavioral problems.

According to the probable cause affidavit, jail deputies observed Davis trying to flood his cell around 7 p.m. Saturday.

At the time, he was instructed to turn around and place his hands behind his back, but instead he punched Sgt. Michael Carter in the face, the affidavit said.

Deputies Jacob Crow, Jimmy Fulkerson and Casey Sheets rushed into the cell to subdue him, according to the affidavit, but Davis continued fighting and struck four deputies.

Shortly after, deputies contained the situation and moved Davis to another cell and placed him on lockdown, according to the affidavit.

Carter, Crow, and Sheets were transported to CHI St. Vincent Hot Springs for treatment of their injuries. Sheets suffered a bruise on the back of his head, and Crow received a cut in the back of his neck.

Carter remained hospitalized Monday and was being treated for bruises on his face and a fractured nose.