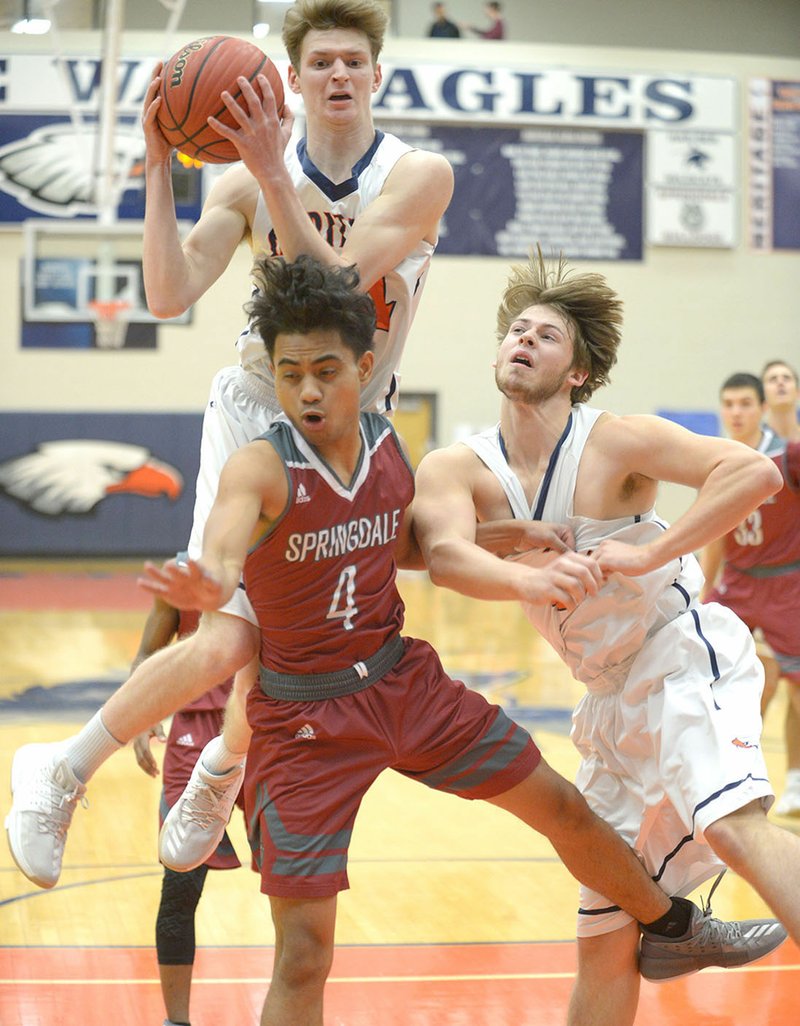 ROGERS — Rogers Heritage managed to extend its school record winning streak to 11 games Friday night, but it needed a fourth-quarter rally to do it.

Senior Seth Stanley scored eight of his game-high 21 points in the fourth quarter to help Heritage claim a hard-fought 49-43 win over Springdale High in the 7AWest Conference boys’ opener for both teams in War Eagle Arena.

Stanley’s 3-pointer with 3 minutes, 54 seconds left in the fourth quarter gave Heritage the lead for good, but the War Eagles (12-2, 1-0 7A-West) made nine of 11 free throws in the final minutes to put the game away.

Heritage coach Tom Olsen said Springdale, which led for more than three quarters, got the game at a faster pace that it wanted early and trailed by as many 12 in the second half. But his team persevered.

“They hit us right in the mouth early and got it going at the pace they wanted, in the second quarter especially,” Olsen said. “They played great tonight. I don’t know how our kids pulled this one out. Our kids just kinda hung in there at the end. We got some better shots, made some clutch free throws to get our first conference win.

“We felt like if we could just keep pounding on them as far as moving the ball, sharing the ball and running offense that we could get them to wear down a little bit. I think they wore down just a little, enough for Seth to get some shots. He hit a big three to give us the lead. He’s a great player.”

“There was a row of whistles that I felt, it made our kids kind of guess,” Price said. “It took away our aggressiveness. It made us hesitate a little bit. That allowed them to have more space and they took advantage of that. A lot of the guys that have the ball in their hands for us are young. They’ve played a lot of basketball, but they’re still young. We’re going to a learn a lot from this one.”

Cadarius Baggett’s layup with 3 seconds left in overtime was the difference as Bentonville edged Fayetteville in Tiger Arena. Fayetteville (7-6, 0-1) led 74-72 after Collin Cooper’s 3-pointer with 1:59 remaining, but Bentonville (9-3, 0-1) tied it on Baggett’s two free throws before Asa Hutchinson IV hit two more to put the Tigers in front. Jon Conley, however, tied the game again on his two free throws with 39.3 seconds left. Baggett kept the ball for about 30 seconds before he drove to his right and avoided a Bulldog defender before hitting his shot. Hutchinson finished with a career-high 41 points — 31 in the first half — while Colton Simmons added 14 for Bentonville. Cooper led Fayetteville with 23 and Conley added 15 while Frank Morgan and R.J. Johnson chipped in 10 apiece.

Tylor Perry scored a game-high 27 points and Tyler Garrett added 22 as the Wildcats opened conference play with a blowout win. Har-Ber started slow, but the Wildcats (12-3, 1-0) took control of the game in the second quarter as it turned up the tempo. Har-Ber, which won its eighth straight game, led 32-21 at halftime on a hustle play by the senior Garrett. Garrett missed a deep 3-point attempt with just under 10 seconds left, but chased down the long rebound, then drove to the basket for a layup and was fouled on the shot. His free throw completed the three-point play. Perry owned the second half, knocking down four 3-pointers and scoring 15 of his 27 in the final two quarters. Elliott Paschall led the Mounties (7-7, 0-1) with 16 points and Garrett Dake scored 12.

Bentonville West used a strong second quarter to gain a big lead then put the game well out of reach in the final quarter to pull away on the road at Clair Bates Arena. Gabe Hornsby led a balanced West attack with a game-high 11 points. Garett Wilmot added 10, while Dillion Bailey and Collier Blackburn each finished with 8 for the Wolverines. West (11-3, 1-0 7A-West) used a 17-point second quarter to take a 27-16 lead into halftime after holding a 10-6 advantage after the first quarter. Van Buren was then limited to four points in the third quarter all from the free-throw line. The Wolverines used another 17-point final quarter to finish the game strong in the 7A-West conference opener for both teams. Jordan West scored a team-high seven points for Van Buren (9-6, 0-1).