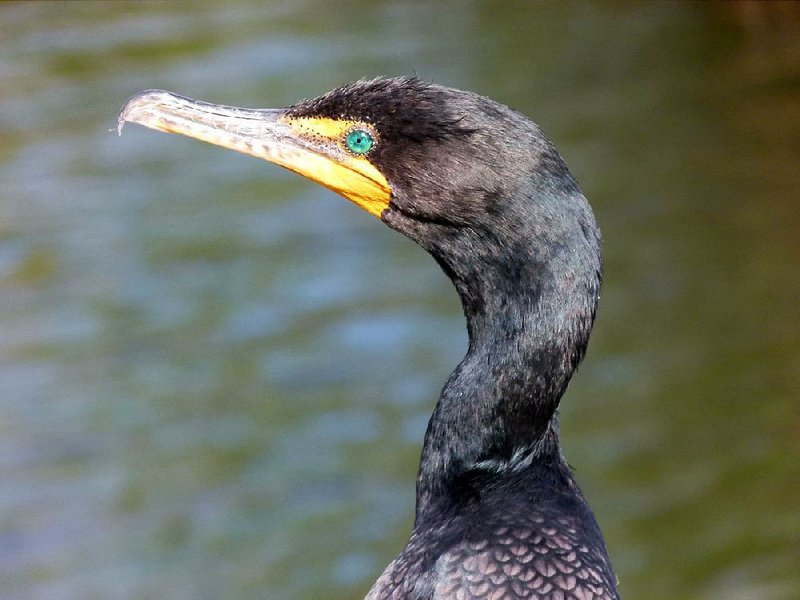 Double-crested cormorants have emerald green eyes, an orange face, a spike on the bill, and gray and black feathers that have a metallic sheen.

Arkansas fish farmers for the first time in two winters have federal permits allowing them to kill a limited number of double-crested cormorants now fleeing the ice and snow of the Great Lakes region.

As they make their way to warmer climates, the birds are particularly attracted to the catfish, minnows, goldfish, bass and other fish being raised in Southern ponds the size of football fields.

The U.S. Fish and Wildlife Service recently resumed issuing such permits to the operators and employees of fish farms in Arkansas and other states. It set a total Arkansas "take" of the birds at about 6,600, through April 30. The 6,600 figure was based on a percentage of the number of kills between 2010 and 2015 on Arkansas farms.

"Our biggest farms now will be allowed to kill maybe 100 or 200 cormorants," said Thurman Booth, Arkansas director of wildlife services for the U.S. Department of Agriculture.

"That's not ideal, but it's better than nothing," Booth said. "Last year, some of those farmers had 4,000 to 5,000 cormorants on their farms -- and they couldn't kill any cormorants by any means. They experienced a tremendous financial loss."

Arkansas exports more than 6 billion baitfish each year, or about 80 percent of the U.S. market, as part of its overall $170 million aquaculture industry.

After losing a federal lawsuit in May 2016, the U.S. Fish and Wildlife Service, which is part of the Interior Department, stopped issuing two kinds of "depredation orders" -- one to farmers allowing a certain number of kills, and another type for state wildlife agencies to protect public land and waters.

The agency also refused to issue kill permits to farms on an individual basis, depending on need -- a matter not part of the federal judge's ruling in 2016. That left fish farmers without much of a defense last winter against cormorants, Booth said. Attempts by Congress in late 2016 to pass legislation to help fish farmers also failed.

Lethal devices -- shotguns and rifles -- are seen by farmers as a way to reinforce the effectiveness of nonlethal tools, such as workers firing off propane cannons or driving along a levee and honking horns.

Arctic conditions in the Midwest and north the past few days will send more cormorants this way, Booth said. "They're not making much of a living right now on the Great Lakes," he said, "so they'll come south where they know there's a good meal to be had."

Cormorants will bypass any Arkansas ponds that are frozen and continue moving south. "But when conditions thaw, they'll come back," he said.

The permits are being issued under a new Fish and Wildlife Service environmental assessment that weighs the bird's population count against the economic losses of fish farms and threats to public health and safety.

The kill limit of 51,571 across 37 states and the District of Columbia will not adversely affect the cormorant's overall population count of about 750,000 in the central and eastern United States and Canada, the agency said.

Mike Freeze, a co-owner of Keo Fish Farm in Lonoke County and a retired fisheries biologist, said his permit allows him to kill no more than 210 double-crested cormorants through April 30. Detailed records must be kept, including the name of the employee who kills a bird and by what means. (The killing of other predators is covered under separate permits.)

With his farms so close to the Arkansas River, where cormorants are eating gizzard shad by day and roosting by night, Freeze hasn't yet seen many of the unwelcome visitors on his ponds this winter. "We've killed a single cormorant since receiving our permit," Freeze said this week.

All of his ponds froze over the weekend and were still frozen Thursday. "Iced ponds are a big factor," he said. "That's keeping them out on the river or sending them on along to Louisiana."

A cormorant can eat up to a pound of fish a day. Although a cormorant can swallow an individual fish up to 16 inches long, its preference is for fish 1 to 4 inches long. Their acidic guano is especially harmful to cypress trees and other vegetation.

Cormorants quickly learn to ignore the scare tactics and resume their fishing, even working together to herd fish into the corner of a pond, Freeze said.

Of the 51,571 kills, nearly 40,000 are allowed in states such as Arkansas, Mississippi and Alabama, which are among the leaders of the nation's aquaculture industry. Kills are permitted in states along the Atlantic Coast.

The cormorant population was nearly wiped out in the 1960s by DDT and other pesticides but was revived -- too well, according to some critics of the bird -- when it was placed under the protection of the federal Migratory Bird Treaty Act in 1972.

The Fish and Wildlife Service is required to assess how depredation orders affect the cormorant's population every five years. A group called Public Employees for Environmental Responsibility sued the agency regarding how it was conducting the 2014 environmental assessment.

Instead, he said Fish and Wildlife used science and numbers from the 2009 environmental assessment for the 2014 assessment. Such a cut-and-paste job violated the National Environmental Policy Act, Bates said in ordering an end to the depredation permits until a new assessment was performed. The latest assessment was released in November.

For now, the new permits are only for individual fish farms.

The agency is still studying cormorants' effects on recreational and commercial fishing and hasn't issued kill permits to those who manage bodies of water pertaining to those activities.