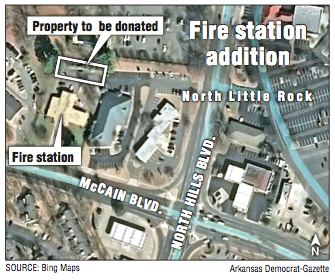 "I was looking over the plat and found there was a little piece of the back parking lot that wasn't ours," Tucker said. "It's where everybody parks back there. We just never realized that little section back there, that we thought of as being our parking lot, was not ours."

Tucker contacted the company that does own the property, he said, and it is to be donated to the city, pending acceptance by the North Little Rock City Council at its 6 p.m. meeting today.

The Woodcrest Co. LLP, by managing partner General Properties Inc. and company President James P. Matthews, proposes to donate the small strip of property -- about 0.14 of an acre, or roughly 6,100 square feet -- "in consideration of" $10, according to a donation deed attached to the legislation.

The property acceptance will allow firefighters at Station No. 7, 2401 McCain Blvd., to continue to park their personal vehicles in the lot behind the station, Tucker said. The firefighters going to and from the station cut through parking areas, he said, used by Lakewood Dental Care, next to the station, and Bank of America Financial Center, at the corner of North Hills Boulevard and McCain. Fire engines exit out the front onto McCain Boulevard.

The property acquisition is separate from the fire station's construction plan, Tucker said. An addition to the back of the building is to provide a larger living area for its on-duty firefighters.

[NEW: Sign up for The Week in North Little Rock email newsletter]

The 1 percent sales tax is divided into two parts: One-half percent is permanent for city operations, and the other one-half percent, to last five years, is for capital improvements to fire stations, streets and drainage improvements and a new Police and Courts Building.

The tax began being collected Jan. 1. The additional tax raised North Little Rock's city sales tax to 2 percent, with a 1 percent permanent tax having been approved by city voters in 2000.

"That station is kind of an open design," Tucker said of the Lakewood-McCain station. "We're just adding onto the back to add private bedrooms. We're trying to make the living quarters a lot better."

The city goes through a process when a property owner proposes to donate property to the city -- making sure, for example, that the owner has clear title and the donation serves a purpose, North Little Rock City Attorney Amy Fields said.

"We have people offer to donate us property from time to time," Fields said Friday. "The only ones we accept are ones that we feel like have value to the city. If something is like a weed lot that is not going to be of benefit to the city, or serve a public purpose, we are not going to take it off their hands.

"But, from time to time, people do have property that we see as valuable and would serve a public purpose," Fields said. "Then if the administration and the mayor's office wants to accept it, we put legislation up for the City Council to let us accept that property."

With the new sales tax revenue to start being received in March -- collections take about two months to be turned back to a city from the state, city Finance Director Karen Scott has said -- Fire Department officials have been assessing department needs and priorities for each of the city's 11 fire stations.

All "should be done this year," Tucker said.

Another priority is replacing Station No. 6, 3500 Camp Robinson Road, serving the Levy area. The old station, built in 1964 and having an array of structural, technological and living quarters problems, is to be rebuilt at a new location. Construction is planned to begin early next year, Tucker said.

For streets and drainage projects to also be financed from the capital portion of the new tax, council members are to come up with priority lists for work to be done based on recommendations from the city street and engineering departments and from community meetings with residents of their respective wards.