Experts weigh in on corridor’s future 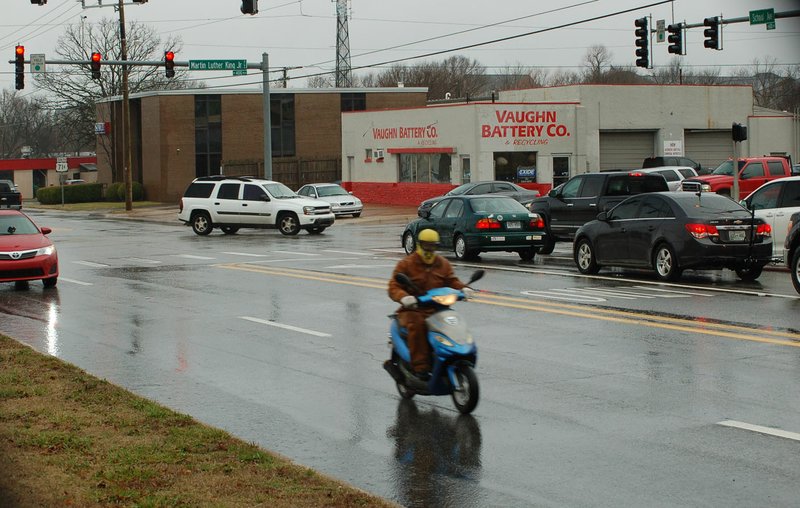 A motorist scoots by near the intersection of Martin Luther King Jr. Boulevard and School Avenue on Friday in Fayetteville. Experts with the Urban Land Institute held a panel discussion on the future of the College Avenue/U.S. 71B corridor.

FAYETTEVILLE — The city is on the right path but has steps to go to make College Avenue a healthy corridor for living, working, shopping and recreating, national planning experts said Friday.

The Northwest Arkansas Chapter of the Urban Land Institute will meet on the fourth Thursday of every month at 5 p.m. Meetings will take place at various locations with discussions on specific projects or areas.

The Northwest Arkansas chapter of the Urban Land Institute put together a three-day workshop culminating with a presentation on the future of College Avenue from Martin Luther King Jr. Boulevard to Sycamore Street. The gathering served as part of the institute’s Building Healthy Places initiative, which aims to promote healthy, thriving communities.

The event was the result of eight months of workshops, interviews and studies with various representatives of organizations involved in planning, design, health and education, said Keaton Smith with the Northwest Arkansas chapter of the institute.

A healthy corridor reflects the culture of the community, facilitates healthy eating and activity and connects a variety of economic and educational opportunities and housing and transportation choices, said Melani Smith , planning consultant and adjunct faculty at the University of Southern California in Los Angeles. The group focused on the 2-mile stretch of College Avenue and the 1½-mile area surrounding it to the east and west.

The city should build upon its current healthy assets, such as Ozark Natural Foods, the Farmers’ Market and food truck lots, said Billy Grayson with the Center for Sustainability and Economic Performance in Washington.

The panelists referred to the stretch of road doubling as a state-owned highway as the elephant in the room. Most of College Avenue doubles as U.S. 71B until it splits near the square, the straight portion becoming South College Avenue and the snaking route west becoming Archibald Yell Boulevard.

“To do what you want to do, Fayetteville should take local ownership,” said Emiko Atherton , director of the National Complete Streets Coalition, also in Washington.

For instance, the lanes would have to be narrowed, with trees added and more visible crosswalks, in order to slow traffic down, she said. Drivers go faster than the speed limit because the street is designed for cars to race, Atherton said.

Various measures could be taken to ensure housing for a variety of incomes, such as public-private partnerships for mixed-use development, the panelists said. More amenities such as open spaces for parks or public events make multi-modal travel more enticing, they said.

Johann Komander, a Northwest Arkansas native who’s moving back to the area from New York City with his wife, said integrating natural beauty with economic activity and development is the sustainable path forward.

“For Fayetteville, bringing in these types of professionals shows that they’re forward-thinking,” he said. “That’s exciting for me.”

The program was made possible through a grant from the Land Institute and the Robert Wood Johnson Foundation.

No local money went toward the budget of about $10,000, but various groups provided in-kind support, City Council Member Matthew Petty said. Fayetteville was among Philadelphia, St. Paul, Minn., and Englewood, Colo., for the institute’s visits.