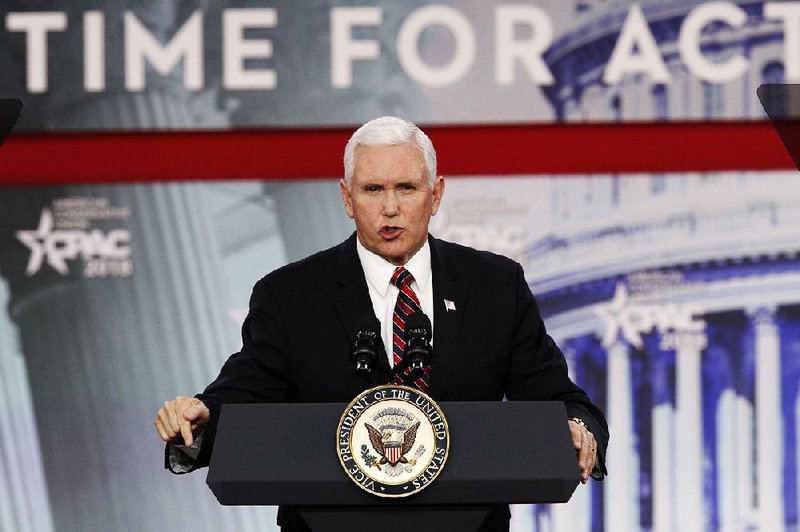 Vice President Mike Pence on Thursday told attendees at the Conservative Political Action Conference in Oxon Hill, Md., that President Donald Trump’s first year has been “a year of promises made and promises kept.”

"Your president and I need you to show up," Pence told activists, urging them to "defend all that we've accomplished."

"It's been a year of promises made and promises kept," Pence added.

Trump's outsider candidacy rattled the conservative movement, but more than a year into his presidency, the onetime Democrat now holds what seems to be a near-total grip.

The largest annual gathering of conservatives has all the looks of a Trump festival, with Republican critics absent from the event outside the nation's capital. Republicans are facing a challenging election season, and the Trump administration wants to motivate conservative activists so they will give endangered Republicans another term.

But a year in power has seen some of the enthusiasm around the gathering wane, with large swaths of empty space in a ballroom already narrowed from previous conferences.

Conservatives said they hope it won't bode ill for their November prospects.

Tim Phillips, the president of Americans for Prosperity, said Pence's efforts amounted to a "pep rally" for potentially unmotivated conservatives. Echoing Pence's call that the administration's first year was the "most consequential" since at least President Ronald Reagan's, Phillips said, "That's a great point that I hope our base hears."

Frequent past attendees such as Senate Majority Leader Mitch McConnell, R-Ky., and House Speaker Paul Ryan, R-Wis., are skipping the event, as is Sen. Rand Paul of Kentucky, the libertarian-leaning Republican who once drew scores of young people to the conference.

Steve Bannon also was absent. The former White House chief strategist whose falling out with Trump cost him his perch atop the conservative Breitbart website had featured prominently at past gatherings.

Paired with supportive interviewers, they highlighted the administration's work over the past year and its future plans.

"Thank you, President Trump, for bringing us someone as wonderful as Secretary DeVos," said Kay Coles James, president of the Heritage Foundation, a conservative think tank, after an interview with DeVos on her overhaul efforts.

Trump was to return to the conference for the second year in a row today.

"He's the president, this should be about him," said Lisa Blankenship, a real estate agent from San Diego. She wore a Trump hat and scarf and carried a small Trump figurine for posing for photos with conservative media personalities.

To Anthony Del Vescovo, 19, a student at Northeastern University, the conference was "very structured to look like a Trump event."

The focus on Trump marks a shift for an event that had long held itself up as a resolute advocate for conservative principles. During the George W. Bush administration, the conference prominently featured criticism of the president's economic and immigration proposals -- particularly sounding the alarm on soaring deficits under his tenure.

There was no such criticism audible Thursday.

Sebastian Gorka, a former White House aide and Trump booster, explained the conversion onstage, saying that "the GOP is starting to understand that this president was only accidentally the GOP candidate."

"He was the rank outsider, he owed nothing to the swamp," he added of Trump, saying the rest of the party is "riding his coattails."

Separately, analysts said Trump has pushed the Republican Party toward a European-style populism that is evident in the conference's lineup.

The list of speakers includes two European nativists, Marion Marechal-Le Pen and Nigel Farage, who were addressing the gathering between panels and events on the dangers of immigration, Sharia law and "lawless" government agencies.

The presence of Marechal-Le Pen and Farage is an indicator of how Trump's "America First" agenda parallels traditional European nationalism, said Benjamin Haddad, a research fellow at the Hudson Institute who studies European populism and trans-Atlantic affairs.

"You do see a convergence with the Trump movement -- when it comes to closed borders, protectionism, the nativism and anti-immigration discourse, the focus on Islam," Haddad said. "It's what we've seen in European movements for years."

"All I want is the survival of my nation," she said, prompting a shout of "Vive la France!" from an audience member.

Farage, the British politician who was a force behind the successful referendum setting in motion Britain's exit from the European Union, will take the stage today.

Information for this article was contributed by Sahil Kapur of Bloomberg News.