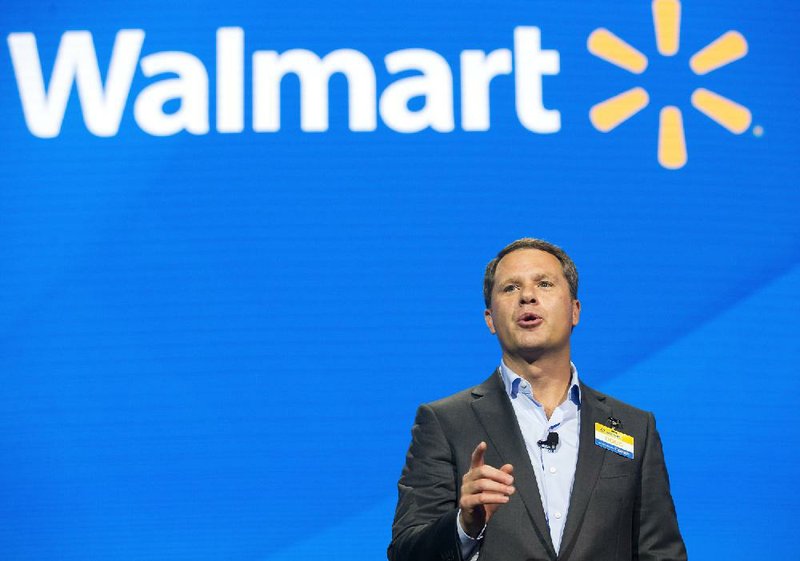 The Bentonville retailer's net income of $2.2 billion, or 73 cents per share, was a 42 percent decrease from $3.8 billion, or $1.22 per share, for the same three-month period a year ago. Revenue increased 4.1 percent to $136.3 billion during the quarter, while Walmart reported U.S. same-store sales growth of 2.6 percent and a traffic increase of 1.6 percent.

Revenue topped analyst projections of $134.9 billion for the quarter, but adjusted profits excluding nonrecurring items of $1.33 per share fell short of expectations. Analysts projected earnings per share of $1.37 for the quarter.

Analyst Brian Yarbrough of financial services firm Edward Jones described the results as a "mixed bag" for Walmart, which faces pressure as it lowers prices, invests in technology and builds its online business to compete with Amazon.com. Yarbrough said the investments, while necessary as retail continues to evolve, continue to affect profits and its fourth quarter results raised concerns among investors.

"For the last few quarters, it's been a beat [expectations] and raise [projections] story," Yarbrough said. "But there's a lot of questions today. I think there's a lot more questions than there are answers."

The company said much of the slowdown was planned because Jet.com contributed less to the e-commerce sales growth in the quarter after being acquired by Walmart in September 2016.

"They still had great growth in online sales, it just wasn't as much as they had expected," Williams said. "When you buy an existing company, there are going to be changes as you integrate them into the business and there's going to be hiccups periodically."

Walmart's online business has grown rapidly in the past year. The company has expanded its assortment, introduced initiatives such as two-day free shipping on items, acquired online retailers like Bonobos and ModCloth, and poured resources into online grocery pickup and other services intended to link the company's online offerings with its network of stores.

The growth helped Walmart produce about $11.5 billion in e-commerce sales for the fiscal year, which remains a small fraction of its U.S. revenue. But the online business has not been profitable, and the company has made several moves to help control costs, including plans to close 63 Sam's Club locations earlier this year and job reductions at the store and corporate levels.

Walmart now plans to reduce marketing spending at Jet.com, which focuses on higher-income, millennial customers. McMillon told investors the cost to acquire new customers on a nationwide basis is cheaper with the Walmart brand so more investments will be made for its main website. The decision will temporarily slow sales growth at Jet.com.

The online slowdown in the quarter was more than the company expected, but Walmart's chief executive said he felt better about the full-year results after e-commerce sales grew 44 percent. The company said last October that it expects online sales to increase by about 40 percent in fiscal 2019, and McMillon reaffirmed the projection Tuesday. He also said he expects the company's e-commerce losses to be "about the same level" as last year.

"We're making real progress putting our unique assets to work to serve customers in all the ways they want to shop," McMillon said.

Yarbrough of Edward Jones was less optimistic Walmart will reach the 40 percent goal, calling it "pie in the sky."

He credited Walmart for continuing to attract customers with a 2.6 percent increase in same-store sales, marking the 14th consecutive quarter of growth. Traffic in stores also increased for the 13th straight quarter. Walmart recorded $86.6 billion in U.S. net sales, a 3.4 percent increase from a year ago.

"They're doing well," Yarbrough said. "I think it's just the law of large numbers and it's a very difficult retail environment out there. It's going to continue to be competitive. Those competitive pressures are not going to alleviate."

Sam's Club reported net sales of $15.5 billion, which was a 3.3 percent increase from the same three-month period last year. Same-store sales at the company also grew 2.4 percent in the quarter, while traffic increased 4.3 percent.

Walmart projects earnings of $4.75 to $5 per share for the current fiscal year, which is lower than some investors anticipated. The company also trimmed its full-year net sales growth forecast to 1.5 percent to 2 percent because of a few business moves, including the decision to close Sam's Clubs and stop selling tobacco at some locations.

The company estimated its tax rate would be between 24 percent to 26 percent as a result of the new federal tax structure. Walmart has recorded a provisional tax benefit of $207 million for the fourth quarter and the full year, but said its analysis is incomplete.

"Including all aspects of tax reform, we currently expect a cash benefit of around $2 billion for the year," Walmart Chief Financial Officer Brett Biggs told investors. 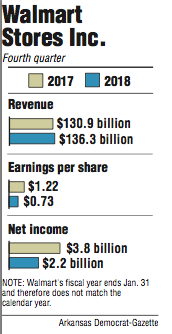