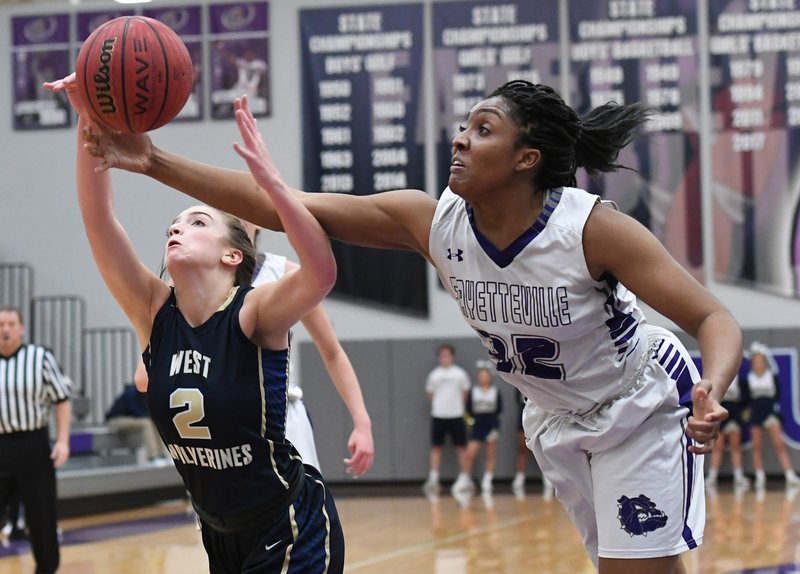 Fayetteville's Jasmine Franklin (right) tries to knock the ball away from Bentonville West's Allie Clifton on Wednesday at Bulldog Arena in Fayetteville.

BENTONVILLE -- As long as Van Buren had the lead and Jamilyn Kinney handled the ball a good distance from the basket, the senior guard was determined to control the pace of Wednesday's game.

But when Bentonville High moved in front midway through the fourth quarter, the Lady Tigers elected to test the Lady Pointers' patience. Bentonville melted valuable time off the clock and made it work with a 42-36 victory during 7A-West Conference action in Tiger Arena.

"I'm proud of how our girls closed out the game down the stretch," Bentonville coach Tom Halbmaier said. "Overall, I thought our team defense was good. We got some stops when we needed them, and Avery Hughes came out strong in the second half and hit some shots to get the lid off the rim.

"As long as Kinney is at the point, it doesn't matter where the game is being played -- she's going to dictate the pace. She's one of the finest point guards I've ever coached against. I'm glad she's a senior and she's graduating. She's going to be a great player at the next level."

Hughes, held scoreless through the first half, put Bentonville (17-6, 6-3) ahead to stay when she nailed a 3-pointer with 5 minutes, 40 seconds remaining, then she split two Van Buren defenders to hit a bucket and made it a 33-30 game with 3:51 remaining. Ira Sandoval's free throw at the 3:05 mark pulled the Lady Pointers (14-8, 5-4) within two, but the Lady Tigers held the ball until Maryam Dauda scored inside with 1:30 left.

Bentonville did the rest its scoring at the free-throw line to not only seal the win, but take a tiebreaker advantage. Emily Sanders hit four straight, then Hughes hit two more and Dauda hit the final one to cap the scoring with 14 seconds remaining.

"We were hitting those free throws," Halbmaier said. "Even with Maryam hitting that one, it gave us a six-point lead. It made two long possessions for them and they would have to hit two 3s to tie it. It was a great win for us."

Hughes finished with 12 to lead Bentonville, which stays in a tie with Springdale for second place in the league standings. Kinney led Van Buren with 14.

Fayetteville outlasted Bentonville West after grabbing leads of 11-0 and 22-11 in the first quarter.

Bentonville West rallied from its slow start and got to within 49-42 in the fourth quarter after a driving layup by Kadie Kultgen. But Fayetteville responded with two inside basket by Jasmine Franklin and a 3-pointer from Coriah Beck to pull away again.

Beck finished with 18 points to lead a balanced scoring ledger for Fayetteville (17-3, 9-0). Franklin added 17, followed by Kennedy Bobbitt with 12, and Sasha Goforth with 11.

Marquesha Davis scored a game-high 18 for the Lady Bulldogs, but it was two huge 3-pointers from Sarah Vogel that help Springdale maintain its lead when Har-Ber pulled close late.

Vogel, who scored 10 points, drained a 3-pointer at the end of the third quarter to extend Springdale's lead to 27-17, then after Har-Ber closed to within 27-21, she nailed another from deep for a 30-21 lead and the Lady Bulldogs held on the rest of the way.

The Lady Mounties made nine of 12 free throws over the final 1 minute, 57 seconds to hold off a late Lady War Eagle charge.

Senior Madison Loyd poured in a game-high 21 points, including one of two free throws with 5.8 seconds left to set the final margin. Ally Figenskau, a 6-1 junior, chipped in 10 points --all in the second half for the Lady Mounties (12-10, 5-4 7A-West).

Heritage (5-16, 0-9), trailed by as many as nine in the second half, but missed a potential game-tying 3-pointer with 2:09 left in the fourth quarter. Faith Rohrbough led the Lady War Eagles with 11, while Sydney Kinnamon added nine on three 3-pointers.