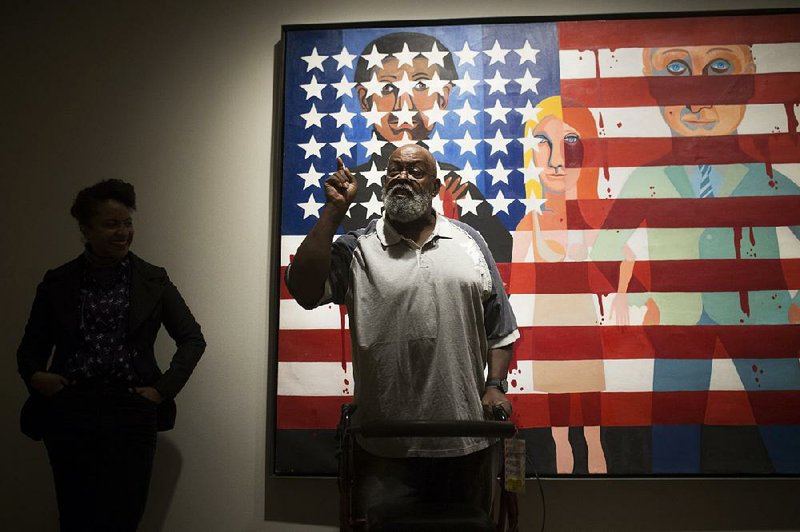 Artist Dana Chandler Jr. said Friday that “Soul of a Nation: Art in the Age of Black Power,” a new temporary exhibit at Crystal Bridges Museum of American Art in Bentonville, was “one of the most important shows” of the century. - Photo by Charlie Kaijo

BENTONVILLE -- A new temporary exhibition at Crystal Bridges Museum of American Art begins with a question posed by a group of black artists in the 1960s: "Is there a Negro image?"

The group, known collectively as Spiral, came together to discuss the role black artists should play during the civil-rights movement. While the goal was to develop a shared position on what it meant to make art during the politically charged period in America, Zoe Whitley, curator of international art for the Tate Modern in London, said their conclusion spoke volumes.

The differing viewpoints serve as the backdrop of "Soul of a Nation: Art in the Age of Black Power," an exhibition developed by the Tate Modern and making its U.S. debut at Crystal Bridges this weekend. The show, which features 164 paintings, murals, sculptures and photographs, examines the different ways black artists were influenced by the cultural and political movements in America between 1963 and 1983.

"Soul of a Nation" opens to the public today and will be on view at the Bentonville museum through April 23.

Romare Bearden, Faith Ringgold, Betye Saar, Noah Purifoy, Martin Puryear and William T. Williams are among 60 artists featured in "Soul of a Nation." The Tate Modern organized their work into 12 sections, which are grouped by movements, geography, galleries and collectives. The show begins with the formation of Spiral and its "black and white" works, winds through sections like the "Kool-Aid" colored art from Chicago-based collective AfriCOBRA and ends with a segment devoted to Just Above Midtown, a gallery that was established to exhibit work from contemporary black artists.

"It charts the way that this group of artists, divided into 12 different rooms and different sections, made art," said Lauren Haynes, Crystal Bridges curator for contemporary art.

The extensive collection in "Soul of a Nation" includes pieces like America the Beautiful by Norman Lewis, a 1960 painting that, after a close look, reveals members of the Klu Klux Klan wearing white hoods. Black Unity, the sculpture of a clenched fist by Elizabeth Catlett, is also prominent in the exhibition in a section dedicated to black power and the Black Arts Movement of the late 1960s.

Dana Chandler Jr.'s work, the bullet-hole-riddled Fred Hampton's Door 2, stands near Catlett's Black Unity and serves as a memorial to a young Black Panther leader who was killed by Chicago police in 1969.

Chandler was part of a media tour of the exhibition Friday and described "Soul of a Nation" as "one of the most important shows" of the century because of the vast collection of artists whose work from an important period, and one in which they didn't receive much notoriety throughout the art world, is being highlighted together for one of the first times.

"We knew that we were valid and our work was as significant as anything done in the world," Chandler said. "We didn't really care that the critics, at that time, were not able to deal with that."

The variety of ideas and artistic styles reveals the "vastly different ways artists responded to the world around them," Haynes said. Cultural and political influences like Martin Luther King Jr., Malcolm X and musician John Coltrane are evident throughout the exhibition. But "Soul of a Nation" also displays the work of artists who focused their attention on color, form and concept.

One section dedicated to East Coast Abstraction notes that black artists who worked in the form faced criticism at times because their art didn't directly represent black communities.

Crystal Bridges is only one of two U.S. museums to host "Soul of a Nation." After its run in Bentonville, the exhibition will travel to the Brooklyn Museum in New York.

Rod Bigelow, Crystal Bridges' executive director, said in a statement that hosting the exhibition gives the museum a unique chance to "tell a more expansive story of American culture."

The theme has been emphasized in other ways at Crystal Bridges, including a reorganization currently underway in its early American art galleries. Curator Mindy Besaw said in December that the redesign is part of the museum's goal of being more inclusive and broader in helping visitors see the "complexities of American art."

In addition to the exhibition opening to the public, Crystal Bridges is hosting a "Soul of a Nation" symposium today. The symposium will include panel discussions featuring several artists with works on display in the exhibition reflecting on art, politics, music and community of the time.

The museum will also offer 45-minute guided tours that begin at 1 p.m. on Mondays, Wednesdays and Fridays during the duration of the show. Tickets are required for the exhibition, but there is no additional charge for the guided tours.

"It's a privilege to be able to share the artists' work as widely as possible," Whitley said. "There's often a sense that the people who are interested in contemporary art may only live in New York City, L.A. or London. That somehow it is an urban experience or you have to be a particular kind of person.

"Hopefully one of the things that people can feel coming to Crystal Bridges, this space, is that it's all people and there are wonderful stories, wonderful contradictions and lots of surprises, too."