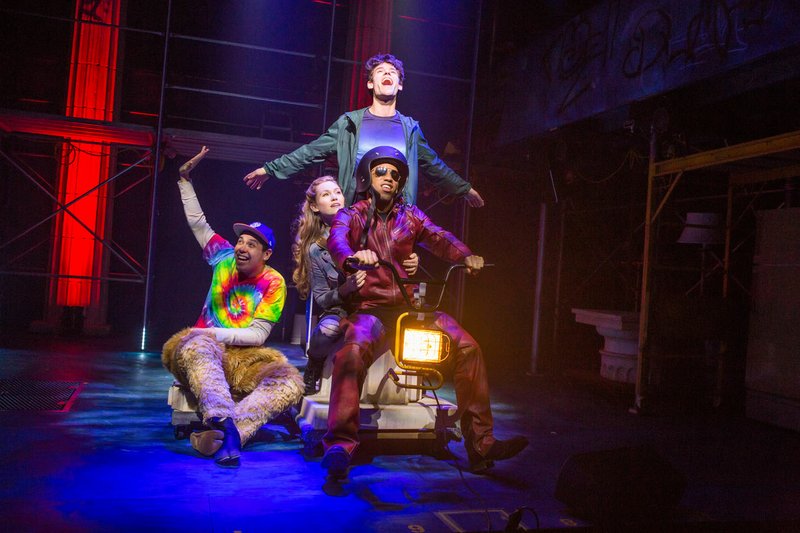 Photo courtesy Jeremy Daniel The original cast of the Off-Broadway smash hit "The Lightning Thief: The Percy Jackson Musical" has reunited as the show prepares to embark on its first national tour. Fayetteville audiences will be the first to experience the new musical outside of its New York debut in 2017.

Fayetteville will be the very first city outside of New York to experience the magic, adventure and electricity of "The Lightning Thief" as the first national tour launches from the Walton Arts Center Jan. 4. The musical adaptation of Rick Riordan's New York Times Best Seller about Percy Jackson -- a "half blood" demigod who finds out he is the son of Poseidon -- debuted Off-Broadway in 2017. Nearly every member of the original cast is back as the show sits down in Fayetteville to finish the necessary preparations and rehearsals needed to launch a tour.

"The first time we did it, it was truly like, 'Can we pull this show off?' And we didn't know," shares Chris McCarrell, returning over a year later to the lead role of Percy. "When you first put up a show, you kind of are just guessing. And now I truly feel like I know what this show is, the style of it. There's something about seeing how it's marketed, seeing how the cast album sounds all together, what the band sounds like. All that, we didn't know when we were rehearsing last time. We only rehearsed with a piano -- I never even heard a guitar with this show until we started our run last time, and it's a huge rock musical. So I feel like now I truly know what we've made and what we're making, rather than just being blind and taking some guesses and risks."

The production does take some risks this time, too. Reviews and press for the debut run praised the charm of the show's "low-tech" nature -- tools and mechanisms used to portray the magic and creatures on stage instead of technology and computers. In other words, you can "see the seams," McCarrell says. The set is an industrial scape of scaffolding and presented some unique challenges in working around the fantastical elements of the story -- these are Greek gods, after all.

"It's a funny concept because theater's been used for years to tell stories that are larger than life," McCarrell muses. "And then as we progressed as a society technologically, now we have this thing called 'low tech theater,' but it's not low tech theater; it's just theater, you know what I mean? High tech theater is probably more far away from the original heart of theater. And so low tech, you're actually getting back to the basics of what makes theater so fun. To me, it's when the audience goes, 'How the heck did they do that?' And you know it's not from money. So you almost feel like a magician.

"Rather than the whole culture of Broadway today is kind of like how much money can you throw at a show and how robotic and seamless can you make it?" McCarrell continues. "It's really fun to see how much character you can add to the actual production when you're just creatively solving basic problems in a fun and really fearless way. Moving forward from this, I think I'll always remember if I'm ever directing a show or working on a show to not be embarrassed [for people to see the workings] -- it's a stage show and the audience is in on it with us. You don't have to cover up and try to make everything polished and perfect that way."

Monsters and gods and magic powers can all make it easy to be distracted from the consequences of our hero's personal journey. Percy's mother, the only person in his life who has supported him, disappeared and now he must navigate this newly discovered world and all its challenges while still searching for his mom.

"Some of those monsters, they really wanted a hyper-realistic effect to remind the audience that this is real. To this boy, this is [a] life and death situation," McCarrell reveals. "So when Percy is fighting a Minotaur and his mom protects him, it's truly happening. There's some moments [like that where] they're really trying to bring home the gravity of the situation.

"It's so fun and exciting in moments, but it's hard to keep one foot rooted in that this is an actual boy who doesn't know where his mom went. The stakes are so high for him," he adds. "Having some time away from the show and being able to look back on it, I have a little clearer eyes about [the part], so I think I'm trying to ground him a little more in this version than in the past." 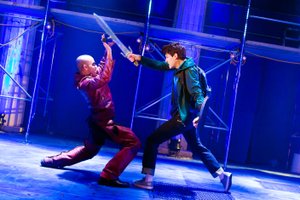 FYI — A limited number of $25 tickets for the first two rows will be available via online lottery two days before each show. Winners will be notified 90 minutes prior to the show and may purchase up to two tickets. Visit the show page on the WAC’s website for more information.