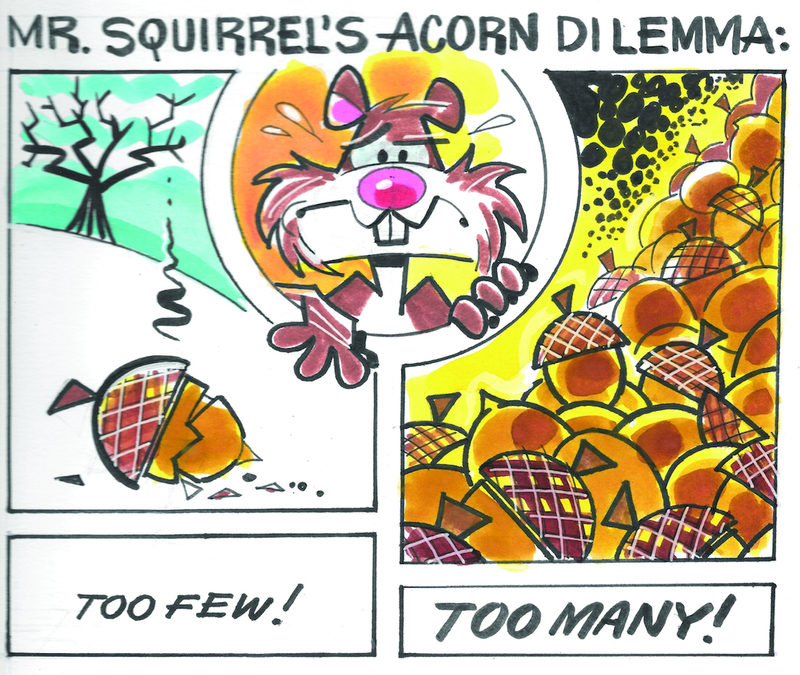 Special to the Democrat-Gazette/RON WOLFE

Q We live in west Little Rock and have several large oak trees that drop many, many gallons of acorns each year. But this year, there were none at all. Any ideas? Thank you.

A Acorn crops vary from year to year, and this year's crop was highly variable across our state. I recently saw huge amounts of acorns in Texarkana, but in some parts of central Arkansas they seem to be very light or below average. In the past two falls, many gardeners were complaining about the constant rain of acorns on their houses. Bumper crops aren't produced every year; as a general rule oak trees will have bumper crops once every three to four years. There are several variables that play a part in acorn production -- including species of oak tree, age of the trees and weather. We typically group oaks into the red or white oak groups. Red oaks flower and produce acorns that take two growing seasons to develop and mature, while white oaks flower and produce acorns that mature in one season. So there can be differences in production simply based on which oak you are growing. Weather is a huge factor. Mild winters cause early blooming, and late freezes can damage flowers, reducing fruit set. Once young acorns are formed, extended hot and dry periods can prevent little acorns from maturing into fully developed acorns in September and October. My guess is there was a combination of weather effects and the cyclical nature of acorn production that resulted in a reduced acorn crop for many parts of the state. If you are in one of the areas where production was good, you should feel lucky; for those in other areas, hopefully we will see a rebound in production next growing season.

Q I planted rose of Sharons too close to a sidewalk. They droop over the walkway. Is there any way to prune so they grow more upright? Thank you.

A Rose-of-Sharon or althea can be pruned as much as you want before growth begins and it should still bloom, because they produce their flowers on the new wood. That being said, I think this is going to be a constant problem, with pruning needed each year. Why not transplant the shrubs to a new location where they have room to grow and thrive and you will have even more flowers? We are in the midst of the transplant season. You could dig it and move it now through February.

Q I have read several previous columns you wrote about a new pest on crape myrtles, but while I thought it was interesting, I just sort of read it and forgot about it, because my crape myrtles were fine. As I was decorating for the holidays and stringing some lights in a crape myrtle, I think I found it on one of my four trees. It has black all along a few branches with specks of white. Is that it? If so, what do I spray with now, and should I spray all the trees? They are side by side but I don't see it on them yet. I think they are all the same variety as they were all planted at the same time 20 years ago.

A Yes, I do believe you have crape myrtle bark scale from your description. This insect has spread statewide on our crape myrtles and we still don't have any definitive research to say which varieties are more susceptible to it than others. This is not the season to start a spray program, but there are some things you can do. First, use a soft brush and warm, soapy water to clean the infected stems. Once your holiday decorations are down, saturate all the tree trunks with a dormant oil. This can smother out many of the remaining insects. Unfortunately you rarely can get 100 percent control with this method, since crape myrtle trees develop a shaggy, peeling bark with age, and the insects are protected when they crawl underneath that. This spring, as they are beginning to grow, use a systemic insecticide around the base of the trees. I normally do not recommend preventive treatments, but if trees are side by side and all the same variety, I think it is just a matter of time until they get it. One application should give you control for at least two seasons. Here is a link to more information about them from the University of Arkansas Cooperative Extension Service: arkansasonline.com/1229crape

Janet B. Carson is a horticulture specialist for the University of Arkansas Cooperative Extension Service. Write to her at 2301 S. University Ave., Little Rock, Ark. 72204 or email her at

Print Headline: IN THE GARDEN: Acorn production varies from year to year