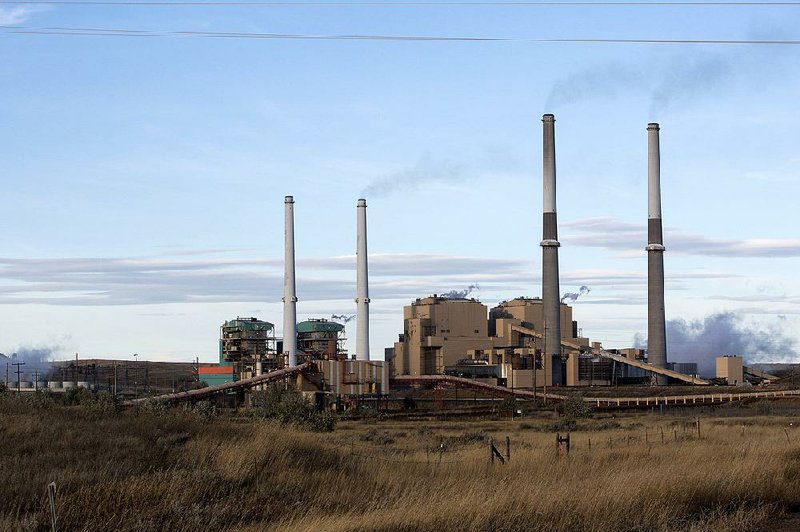 A coal-burning power plant operates in October in Colstrip, Mont. Under a proposal made public Friday by the Environmental Protection Agency, restrictions and penalties on mercury emissions by coal-burning plants would be removed. The EPA said current rules are too costly to justify.

President Donald Trump's administration has proposed major changes to the way the federal government calculates the benefits, in human health and safety, of limiting pollution in the atmosphere.

The proposed new rules would chip away at the financial justifications currently used to limit emissions of mercury by coal-burning power plants. Mercury is linked to developmental disorders in children.

Opponents say the proposal not only stands to make it easier for power plants to pollute more, but also would limit the ability of future administrations to impose more stringent pollution restrictions.

The proposal was made public Friday, when the Environmental Protection Agency issued a new finding declaring that federal rules imposed on mercury by former President Barack Obama's administration are too costly to justify. Those rules, issued in 2011, were the first to restrict some of the most hazardous pollutants emitted by coal-fired plants and are considered one of Obama's signature environmental achievements.

The new proposal does not repeal the Obama-era rules, and utility companies say they have already spent some $18 billion to comply. But it dramatically changes the way the government performs its cost-benefit analysis of those limits by taking into account only certain economic effects that can be measured in dollar terms, while ignoring or downplaying other health benefits that are more difficult to assign a dollar value.

Because the government is required by law to perform cost-benefit analyses to justify new rules, the changes could have long-term implications for future rules. "It will make it much more difficult for the government to justify environmental regulations in many cases," said Robert Stavins, a professor of environmental economics at Harvard University.

By contrast, the Obama administration in its calculations had cited an additional $80 billion in health benefits a year.

Among other things, the Obama administration calculations estimated that the rules would prevent 11,000 premature deaths not from curbing mercury itself, but from what is known as a "co-benefit," the reduction in particulate matter linked to heart and lung disease that also occurs when a plant reduces its mercury emissions. The Trump administration's revised procedures would essentially ignore co-benefits and count only the direct potential benefits of cutting mercury.

In a statement, the EPA said the cost of cutting mercury from power plants "dwarfs" the monetary benefits and argued that the current limits can no longer be justified as "appropriate and necessary" under the law.

The proposal, which acting EPA Administrator Andrew Wheeler signed Thursday, is expected to appear in the Federal Register in the coming weeks. The public will have 60 days to comment on it before a final rules are issued.

During his first year in office, Trump signed executive orders declaring his intention to dismantle environmental rules. As his second year comes to a close, agencies have set the wheels in motion to weaken or repeal nearly a dozen restrictions on air and water pollution or planet-warming emissions of carbon dioxide, including a plan to reduce the number of waterways that are protected from pollutants and another making it easier for utilities to build new coal plants.

Reworking the mercury rule, which the EPA considers the priciest clean-air regulation ever put forth in terms of annual cost to industry, would represent a victory for the coal industry and in particular for Robert Murray, an important former client of Wheeler's from his days as a lobbyist.

Yet the EPA move also had its detractors within the industry. Many utility companies have said the proposed changes are now of little benefit to them, since they have already spent the billions of dollars to come into compliance, and have urged the Trump administration to leave the mercury measure in place.

The original rule required power plants to reduce emissions of mercury and other toxic pollutants by more than 90 percent over five years. Mercury is a neurotoxin that can damage the brains and nervous systems in young children, leading to lower IQ and impaired motor skills. The Obama administration estimated that the measure would prevent 4,700 heart attacks and 130,000 asthma attacks as well as 11,000 premature deaths by also eliminating fine particulate matter linked to those ailments.

Estimates like that, however, are at the heart of the current dispute. Business groups like the Chamber of Commerce and others argue the earlier numbers inflated the benefits of the rule, underestimated costs and improperly justified cutting mercury by relying largely on the benefits of reduced particulate matter.

"For a lot of folks, this was just another example of Obama regulatory overreach," said JeffreyHolmstead, a partner at the law firm Bracewell who served as EPA air chief under President George W. Bush.

The Obama administration had broadly accepted that it is difficult to put a specific dollar figure on some health benefits -- for instance, avoiding lost IQ points in infants (or other fetal harm), which has been linked to pregnant women eating mercury-contaminated fish. For that reason, the original rule argued against using a strict cost-benefit analysis to decide whether the regulation should be imposed, said Joseph Goffman, executive director of Harvard Law School's Environmental and Energy Law Program.

The new proposal fundamentally changes that approach. It recognizes that difficult-to-quantify benefits exist, but said the administrator "has concluded that the identification of these benefits is not sufficient, in light of the gross imbalance of monetized costs."

Ann Weeks, senior counsel for the Clean Air Task Force, an environmental group, criticized the rule as "bean counting," and said, "This is not tax law. This is public-health benefits. It's a very different calculus."

Environmental activists said they intend to challenge the new finding in court. If it survives those challenges, observers say it would set a precedent that could make it tougher for the government to justify any number of future regulations.

"There is a likelihood that this rule-making will be the administration's flagship effort to permanently change the way the federal government considers health benefits," said Janet McCabe, who ran the EPA's air office under Obama.

Wheeler, in a recent interview, dismissed the idea that utilities, having spent billions of dollars on pollution controls, would stop using them. "It's not like people are going to start taking off their equipment and start putting mercury into the atmosphere," he said.

He described the EPA's action as simply a response to a Supreme Court's 2015 decision that said the Obama administration had failed to properly consider economic costs when they imposed the mercury rule and ordered a new cost-benefit analysis.

The Obama administration complied and the rule was reinstated, but the coal industry again challenged the rule.

Wheeler described the EPA's plan to reopen the mercury rule as an answer to the court and said he was not concerned by either the utility industry's disinterest in seeing the rule reworked or the views of his former client, Murray. 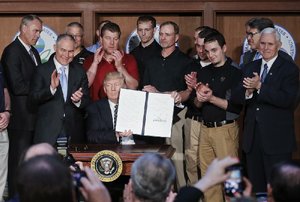 Photo by AP/PABLO MARTINEZ MONSIVAIS
Surrounded by coal miners and White House officials on March 28, 2017, President Donald Trump shows off an executive order easing environmental rules. In the months since, agencies have moved to weaken or repeal nearly a dozen restrictions on air and water pollutants and carbon dioxide emissions. 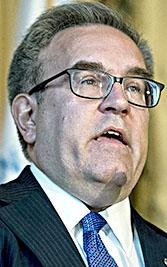