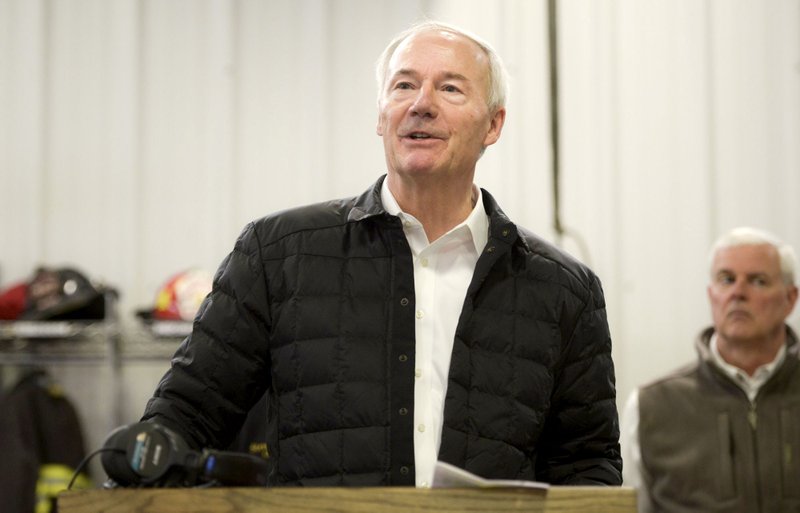 BELLA VISTA -- Gov. Asa Hutchinson vowed today to use state money to help put out a fire that has smoldered underground since July, but told residents the cleanup will be expensive.

Hutchinson said he was declaring an emergency and that he would sign the declaration next week. Issuing the declaration will help cut through government red tape, he said.

The governor and a delegation of local, state and federal officials toured the site of an old stump dump on Trafalgar Road for about 30 minutes, then held a news conference at Bella Vista Fire Station No. 2 where more than 75 people turned out.

Some in the crowd wore filtration masks.

The Arkansas Department of Health said Dec. 12 preliminary results of monitoring near the fire showed air quality in the "unhealthy" category, according to a news release.

Everyone within a half-mile radius of the 8000 block of Trafalgar Road was cautioned to avoid prolonged or heavy exertion outdoors.

The state has contracted with EnSafe from Memphis to remediate the site. The initial cost will be $990,000, Hutchinson said. The money will come from a state fund that had $8 million in it and is used to help clean up hazardous and other problematic sites across the state.

The stump was owned by the Bella Vista Property Owners Association for 13 years. The property is now owned by Brown's Tree Care.

Firefighters were initially dispatched to the area July 29, where they spotted smoke and what appeared to be the remains of a brush fire, Fire Chief Steve Sims said. There were no controlled burns listed in the dispatch log, he said, and the property owner denies burning brush.

Tom Judson, the Bella Vista Property Owners Association's chief operating officer, previously said the association operated the stump dump on leased land starting December 2003 until the end of 2016 when the dump was covered with soil.

Nobody monitored the site the last few years it was open, but staff would remove trash when possible, Judson said.