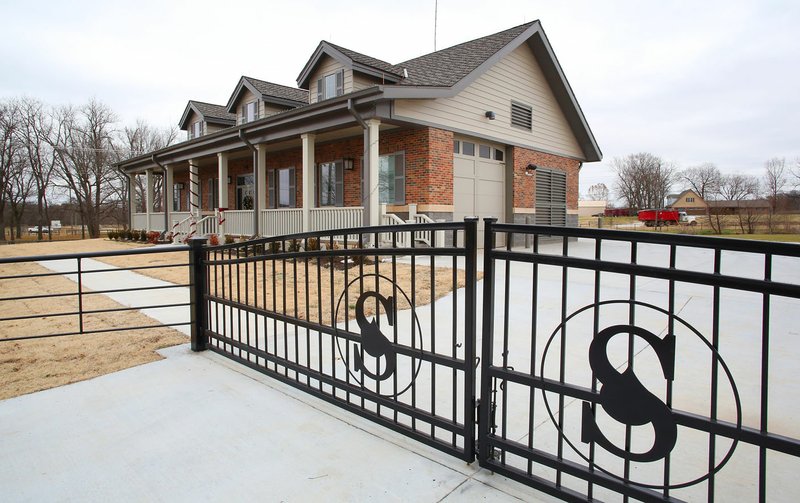 NWA Democrat-Gazette/DAVID GOTTSCHALK A Springdale Water Utilities lift station was built off of Kelly Road near North Elm Street in Springdale. The city has added water and sewer lines in northwest Springdale in anticipation of expected development in the northwest part of town.

SPRINGDALE -- The city took two steps forward in the regional race for development.

The first residential customer on the new system received water and sewer service in November, said Heath Ward, executive director of the utility. The city-owned water and sewer utility is operated independently by the Water and Sewer Commission.

The 24- and 15-inch pipelines are buried. Even the construction went mostly unnoticed because the area is rural.

"It's the best-kept secret in Springdale," Ward said.

"So much of our work is unseen by our customers," said Rick Pulvirenti, chief operating officer and director of engineering.

"Being ahead in terms of infrastructure is very unusual," said Jeff Cooperstein, a researcher with the Center for Business and Economic Research at the University of Arkansas. "Cities are always behind."

The $12.5 million project will serve 10,000 to 15,000 households. Only an addition of pumps would be needed to expand the system, Pulvirenti said.

The city utility paid for the Spring Creek sewer project with money from the rates paid by customers, Ward said. The department received no tax revenue, grant money or bond money.

The idea for the sewer project was first proposed at a City Futures session in 2002. The event was sponsored by the Chamber of Commerce.

"It was just a meeting about local roads, but we were thinking 10 years out," Ward said. "With so few highway interchanges, there was not a lot out there. But Paul Lawrence said, 'There will be.'" Lawrence is a member of the Water and Sewer Commission.

After initial design, Pulvirenti presented a map of the Spring Creek project, and commissioners decided to move forward on the project in 2014, Ward said.

Developers first eyed the northwest quadrant of Springdale for residential development 15 years ago, Webb said, and worked to acquire land for major subdivisions. During the recession, many of these developers lost the land to financial institutions.

Building the sewer system says the city definitely expects growth to go that way, Cooperstein said. He said the system will serve homes near I-49 exits 70-73.

"It's easier to keep development going if you invest in infrastructure," Cooperstein said. "Then people see it as a desirable area."

"Wherever your sewer stops, your growth stops," Webb said. "There's no place available to expand."

A good sewer system allows for higher-density development, Pulvirenti added. "Imagine a hotel with 100 rooms that had to have a septic system for each room. That septic system would be huge."

A medical park developing in the southwest area of town should benefit that northwest area with ancillary businesses such as restaurants, hotels and shops, Cooperstein said. "Business drives rooftops, and then retail appears," he said.

Arkansas Children's Northwest opened its hospital in the district last spring. Construction continues for facilities for Highlands Oncology and Mercy Health Systems. A building to house medical offices will further serve the area.

The City Council earlier this month approved a housing development in the area north of West Sunset Avenue and west of I-49.

Landmarc Custom Homes plans the Cottages at the Park subdivisions adjacent to the Shaw Family Park. Both should be completed in about a year.

Tim Boudrey, co-owner of the building company, said development of the subdivision was based more on the opportunity the location offered, but the company wouldn't have bought the property without sewer service.

"Once we put in the backbone, it will be cheaper for developers," Ward said. "They take responsibility to get their projects hooked to the main line. Then we take over perpetual maintenance."

Without sewer service, each home in his new subdivision would require a septic system, Boudrey said.

"Sewer capacity is based on grade of the land, and luckily, we have a lot of grades," Pulvirenti said.

The system relies on land forms to move the wastewater, with gravity pulling the water down hill through pipes to the west toward the Illinois River, he said. Pump stations -- also called lift stations -- at low points push the waste back east to the city Water Treatment Facility on Silent Grove Road.

The project included 5.3 miles of pipe relying on gravity and 3.2 miles of main pipe through which water is pumped, Pulvirenti said. The project also brought two new sewage lift stations.

The station on North Wagon Wheel Road looks like a red barn beside a babbling brook. The other off North Elm Street presents the facade of a home, complete with wreathes and lights for the season.

Pulvirenti said the water department tries to blend its facilities with those in the neighborhood, so they don't look like an eyesore, or a commercial or industrial space in the middle of $500,000 homes.

"We want to be good neighbors," he said.

Ward noted much of the sewer upgrade was done in cooperation with the Arkansas Department of Transportation's construction along the Arkansas 612 bypass -- replacing and upgrading pipes when the earth turned for the track of the highway.

"Otherwise it would be very expensive to upgrade," Ward said. "They pay the base cost, and we pay the expense of the upgrade. More bang for your buck. We value those relationships."