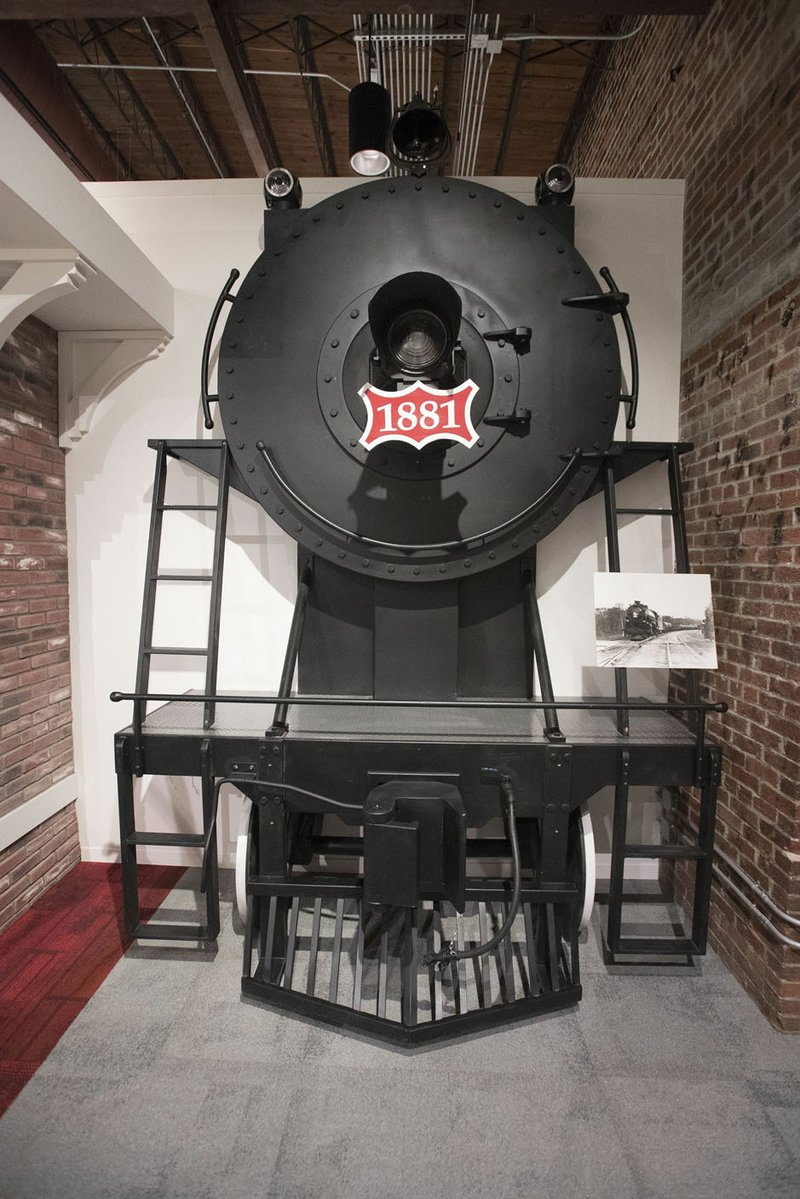 NWA Democrat-Gazette/J.T. WAMPLER A nose of a locomotive comes out of a wall at the newly revamped and reopened Rogers Historical Museum.

The story goes beyond just finding a bigger and better location for the Rogers Historical Museum. Opening that new home at 313 S. Second St. also gave new life to an iconic 1947 building and allowed the museum to put a new spin on the collections acquired in the first 43 years of its existence.

The story of the Rogers Historical Museum goes back to 1974, when councilwoman Opal Beck suggested creating a museum as the city's Bicentennial project. A nine-member commission was formed, with Vera Key as chairwoman, and on Oct. 25, 1975, the museum opened in a rented 1905 former bank building. Just seven years later, the Harold Hawkins family donated the 1895 Hawkins House on South Second Street, and by 1985, the museum was so popular an addition was needed -- and was funded, named in honor of Key and completed by Dec. 5, 1987.

Planning for another expansion began in 2006, but the first idea -- to build a new structure -- was rejected because of its price tag. When the 1947 Hailey Ford building became available in 2015, it offered not only plenty of space -- an increase from 15,500 to more than 29,000 square feet -- but a chance to renovate that historic structure. It opened as the main location of the Rogers Historical Museum on Dec. 13.

"We couldn't have done it without so many hands, so many different skills and talents," John Burroughs, the museum's director, said a week before the reopening. Burroughs relied on his staff's considerable talents -- and when they needed outside help, plenty of people were ready and willing. Former director Gaye Bland, for example, jumped in to do research and write exhibit cards. Sam Syzdek of Mulberry created what Burroughs calls the "best and most accurate model" of the Van Winkle Mill, which existed between 1850 and 1890 east of Rogers. Bob Rich of Rogers volunteered his time to create the front end of an almost life-sized train engine and -- on the other side of the gallery -- a half-sized turquoise-colored 1950s kitchen as part of the interactive children's section.

Galleries include the Natural State Gallery, which "sets the stage for how the area's natural resources shaped farming and business and how Rogers has reinvented itself over the years," Burroughs said; the Road & Rail Gallery, taking visitors from covered wagons and log cabins to the founding of Rogers, World War I, the rise of the apple industry and how the automobile changed everything; America's Heartland, which looks at the early significant families of Rogers, the Great Depression, World War II and Korea and the rise of tourism in the region; and the White River Gallery, which considers the creation of Beaver Lake and the fascinating rise and fall of Coin Harvey's Monte Ne.

Finally -- or first, for those with children -- is the most enticing area of the museum, complete with Grandpa's Workshop, the 1950s kitchen and more.

"I challenge you to find a more interactive museum anywhere," Burroughs said earlier this month, not just in computer screens, but in train bells that ring, a simplified switchboard where kids can call around the children's area, a slide inside a facade of Rogers Public High School and even an original concrete chair from Monte Ne, finally rescued from display outdoors at Frisco Park and moved to the museum.

The first thing visitors will see, however, is the original line of the Hailey Building, a 1947 Art Deco brick structure that was, according to historian James Hales, "considered the most attractive building in town." Heavily modified in the 1980s by the owners of the Northwest Arkansas Morning News, it looked colonial until contractors started peeling off the facade -- and found the original curved line of the windows and the original terrazzo floor, which Burroughs says would cost thousands of dollars to re-create today. When the Vitrolite glass tiles were revealed, that was the icing on the cake, Burroughs says.