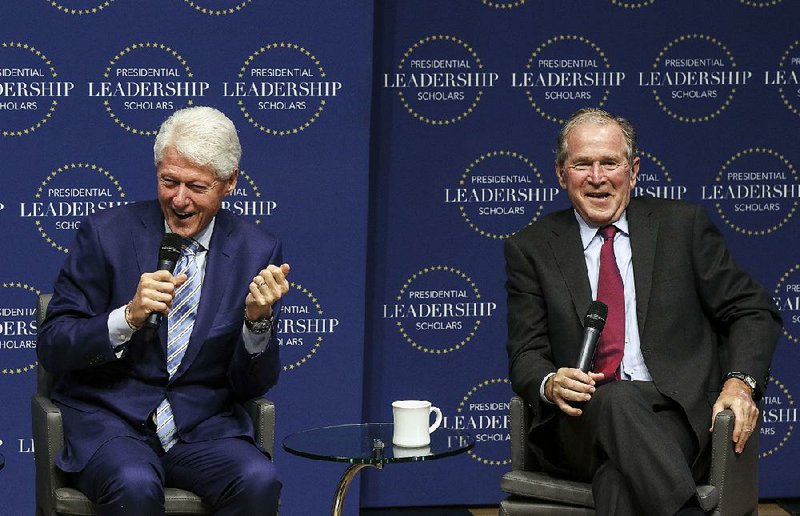 The new federal criminal justice and sentencing law was backed by former President Bill Clinton, even though it rolls back some of the tougher Clinton-era federal penalties.

"President Clinton believes this bipartisan effort is an important first step," his spokesman Angel Urena said in an email to the Arkansas Democrat-Gazette on Saturday morning.

The First Step Act, which was signed into law by President Donald Trump on Friday, overhauls the federal system. Federal prisons currently house 180,843 offenders. Overall, there were roughly 2.16 million people locked up on the state, local and federal level as of Dec. 31, 2016, according to the U.S. Department of Justice.

Bruce Reed, who served as Clinton's chief domestic policy adviser, said passage of the First Step Act is "a good thing," for America.

It's encouraging, he said, that the legislation received broad bipartisan support.

"Bill Clinton's goal was always to make crime a practical issue, not a political one. It's a sign of the progress we've made that Republicans are no longer insisting that more prisons and tougher sentences are the only way to go to fight crime," he said in an interview.

Under the First Step Act, people imprisoned under the three-strikes law will no longer face automatic life sentences. Instead they will face 25 years in prison. Certain drug offenses that carried automatic 20-year sentences will now result in 15-year sentences.

It also makes retroactive a 2010 law that reduced the disparity between powder-cocaine and crack-cocaine-related convictions. Before 2010, crack-cocaine possessors were dealt with more severely than those caught with powder cocaine.

The tough mandatory minimum cocaine sentences were adopted in 1986.

Some of the harshest criminal penalties date to the Clinton era.

The federal prison population, roughly 25,000 in 1980, had soared during the administrations of Presidents Ronald Reagan and George H.W. Bush, and it continued to climb throughout the Clinton years.

The climbing incarceration rates during the Clinton era were accompanied by falling crime rates. Violent crime rates fell each of the eight years he was in office. Murders and non-negligent manslaughters plummeted, from 24,526 in 1993 to 15,586 in 2000.

While pleased that crime had fallen, Clinton eventually came to regret some of the consequences of the 1994 legislation.

"I signed a bill that made the problem worse, and I want to admit it," he told the audience during an appearance in Philadelphia.

In the speech, Clinton portrayed the 1994 bill as necessary and effective, but imperfect.

"When I took office, we had had a roaring decade of rising crime. We had gang warfare on the streets. We had little children shot dead ... who were just innocent bystanders standing in the wrong place. Violent crime in America had tripled in the previous 30 years, and the police force had only increased by 10 percent," Clinton said.

The law helped make America safer but also was unnecessarily harsh in some instances, he said.

President Barack Obama tried and failed to pass an overhaul of the federal criminal justice system. Trump, in the waning days of the 115th Congress, ultimately pulled it off.

Support for the First Step Act came from across the political and cultural spectrum, including the American Civil Liberties Union, the American Conservative Union, the Fraternal Order of Police, the Faith and Freedom Coalition, the National Association of Evangelicals and Prison Fellowship.

U.S. Sen. Tom Cotton, a Republican from Dardanelle, was the only member of Arkansas' congressional delegation to oppose the legislation.

Former Gov. Mike Huckabee was among those who had urged its passage.

"A lot of the policies enacted in the '90s designed to be 'tough on crime' were disastrous. Good intentions, but [they] failed to reduce recidivism and busted the budgets," he told the Democrat-Gazette in a text message earlier this month.

Three-strikes, you're out was "a great applause line, but an awful policy," Huckabee added.

Rather than a rejection of Clinton's criminal justice policies, the First Step Act represents an embrace of long-held Clinton principles, according to Reed, the former domestic policy adviser.

Clinton's written plea had also called on Congress to "pass legislation to shrink the disparity between crack and powder cocaine sentencing."

Reed says Republicans and Democrats are comfortable re-examining criminal justice policies because the nation has changed.

"In large part, it's because we're a much safer country than we were 25 years ago. The crime rate is half what it was then. We have 10,000 fewer murders a year than we'd be having if the murder rate were still what it was when Clinton took office. That's nearly a quarter-million lives over a quarter-century that weren't lost to murder. I think the country feels safer," he said. 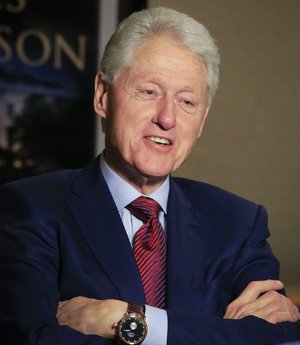 Photo by AP
In this Monday, May 21, 2018, photo, former President Bill Clinton listens during an interview about a novel he wrote with James Patterson, "The President is Missing," in New York.