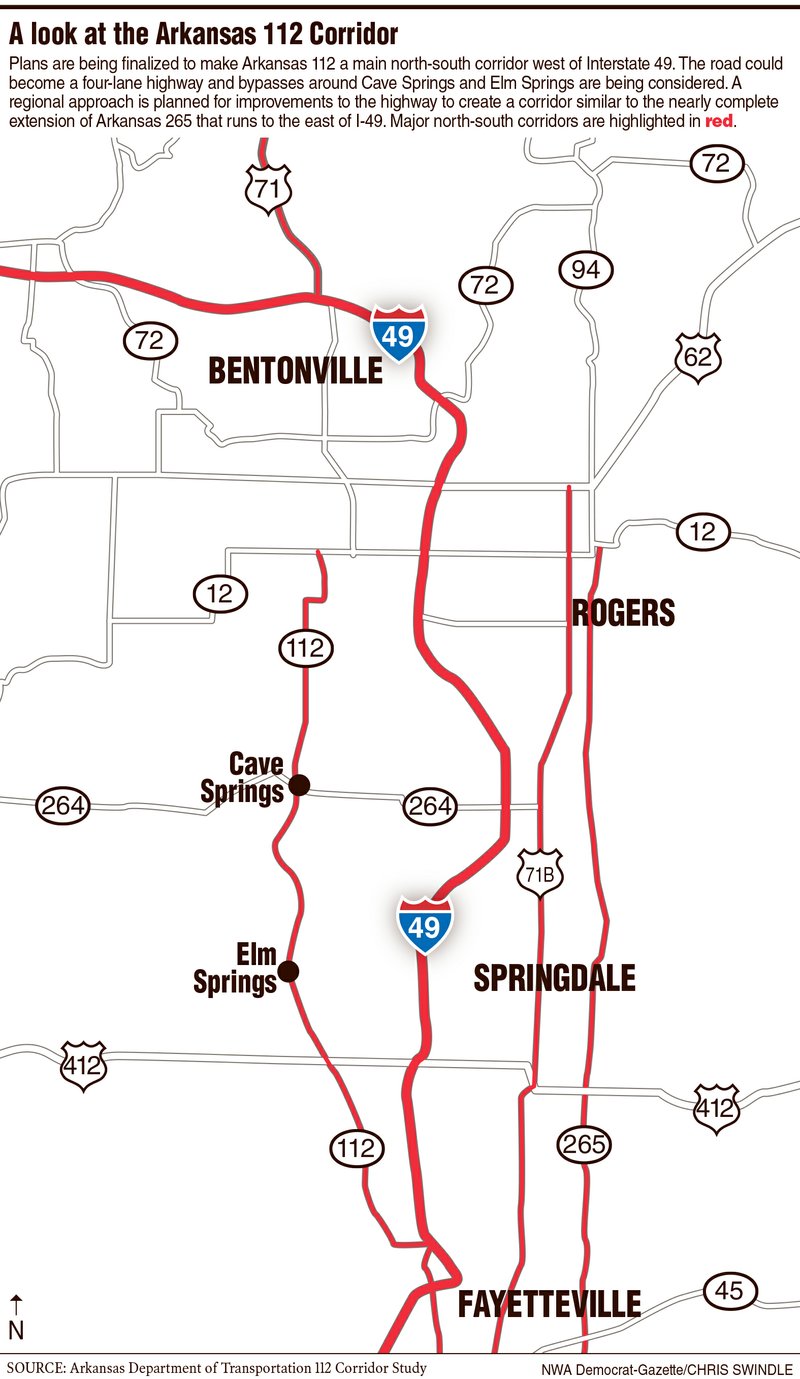 SPRINGDALE — Planners and state highway officials say they’re going to take a regional approach to Arkansas 112 between Fayetteville and Bentonville, and make it a wider and safer option for traveling between the two cities.

Changes will be made with access management in mind. Access management refers to the design, application and control of entry and exit points, such as left turns and driveways.

Access management was recommended in a 2015 state corridor study as one of the main objectives in improving the stretch of highway. A report on that study also recommends four lanes from Fayetteville to Bentonville, widening and straightening several curves, and probably bypassing at least one town, Cave Springs.

“We’ve got one chance to do 112 right,” said Philip Taldo, a state highway commissioner. “If it’s not done right right now, it’s not going to be right, ever, in our lifetimes and our kids’ lifetimes.”

The recommendation came after a recent meeting with representatives from most of the cities the road passes through, even though the final alignment of the road hasn’t been determined. A resolution is expected to be submitted to the full Northwest Arkansas Regional Planning Commission for approval in the near future.

Andy Brewer, with the Arkansas Department of Transportation, asked the commission — which is the region’s Metropolitan Planning Organization — to support using access management for Arkansas 112 rather than to negotiate the changes piecemeal with individual cities.

The final alignment of the road may bypass smaller communities, such as Elm Springs and Cave Springs, where Arkansas 112 currently serves as the main drag through town.

Improving the route is vital to the region’s transportation system because few roads stretch through the entire region from north to south, said Tim Conklin, a senior planner.

“As a region we struggle even with the bigger cities trying to get everybody on the same page. The challenge to everybody is we’re no longer just dealing with the big four or five cities on transportation planning,” Conklin said.

“We have a bunch of other cities adjacent to the bigger cities that will all have to work together to make this work. The population is projected to be 800,000 by 2040, so we’re going to have a lot of traffic we’re trying to move, and we have very few north-south corridors that we have the opportunity to do this with,” he said.

Conklin said the regional agencies and the cities will have to agree to design the road with access management. A multiparty agreement among the eight cities along the corridor, regional planners and the highway department will likely be drafted.

“I’ll just say that you will have unhappy people,” Conklin said. “Why we’re doing this is to benefit society and the citizens vs. the inconvenience of some property owners, and we’re trying to balance that out. It’s not an easy decision.”

Chris Brown, Fayetteville city engineer, pointed to similar work along Arkansas 265 in the region. He told the group that critics warned that access management along Arkansas 265 would harm businesses and commuters, but the success of the project has proven them wrong.

“We haven’t seen any operational issues,” Brown said. “I do feel like it’s a very efficient facility that moves traffic really well.”

Taldo reminded the group that the highway department’s interest doesn’t include furthering commercial development in the corridor, such as what has happened along U.S. 71B.

“I think the cities really need to keep in mind the mission of the state highways and that is to move traffic safely and quickly from one place to another,” Taldo said. “It’s not to substitute for a city street, commercial development and things of this nature.”

The study suggests that one of two options to bypass Cave Springs would be preferable to routing four lanes through the town because the route is so close to a cemetery and the environmentally sensitive Cave Springs recharge area.

Cave Springs Mayor-elect Randall Noblett said that if his town is bypassed, he wants to make sure the downtown remains viable.

“Of course, we prefer to have traffic coming through Cave Springs, but I understand the fact that we are limited in the downtown area as far as what they can do,” Noblett said. “If it’s going to be a larger highway, like they’re talking about, it probably has to bypass Cave Springs.”

If there’s a bypass, Noblett said he’d like to see regularly scheduled events and festivals to draw people off the highway to visit.

The findings in the study are the preferred routes from an engineering standpoint and aren’t set in stone, according to Paul Simms, metropolitan planning coordinator for the highway department.