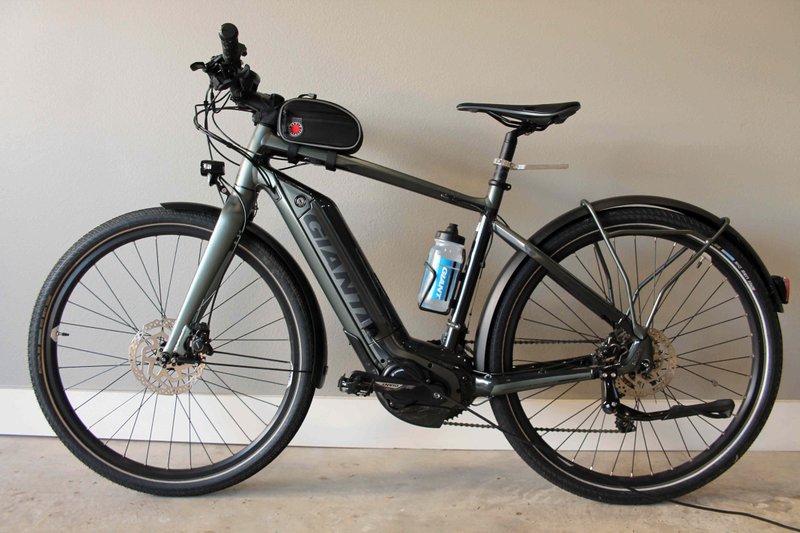 Regina Seelinger’s Giant Quick E+ bike includes a kickstand, and she can hook up a trailer and haul her grandchildren around. (Arkansas Democrat-Gazette/SEAN CLANCY)

There are bicycles among us that have motors.

Hang on. If it has a motor, is it even a bicycle?

What we're talking about are e-bikes — bicycles outfitted with small electric motors but are often still powered in part by a pedal-pushing person.

Electric bicycles are not new. The first iterations appeared in the 1890s and variations on the theme have been honed over the years. They've been popular in street and off-road form for a while in Europe, but never gained much traction here.

That is changing. Smaller, longer-lasting batteries have made e-bikes more efficient, and they're becoming more common among recreational cyclists. E-bike sales jumped 112 percent from March 2017-April 2018, according to NPD Group, a market research firm.

Big-time bike brands such as Cannondale, Giant, Trek, Specialized, Orbea and others have in the past few years gone all-in on electric-assisted, two-wheeled conveyances, offering models for mountain bikers, roadies, commuters and other riders in an effort to get the attention of — and grow — the market. Italian motorcycle maker Ducati even has its own version of an electric mountain bike, and Harley Davidson included concept art of an e-bike when it announced plans for its new products earlier this year. 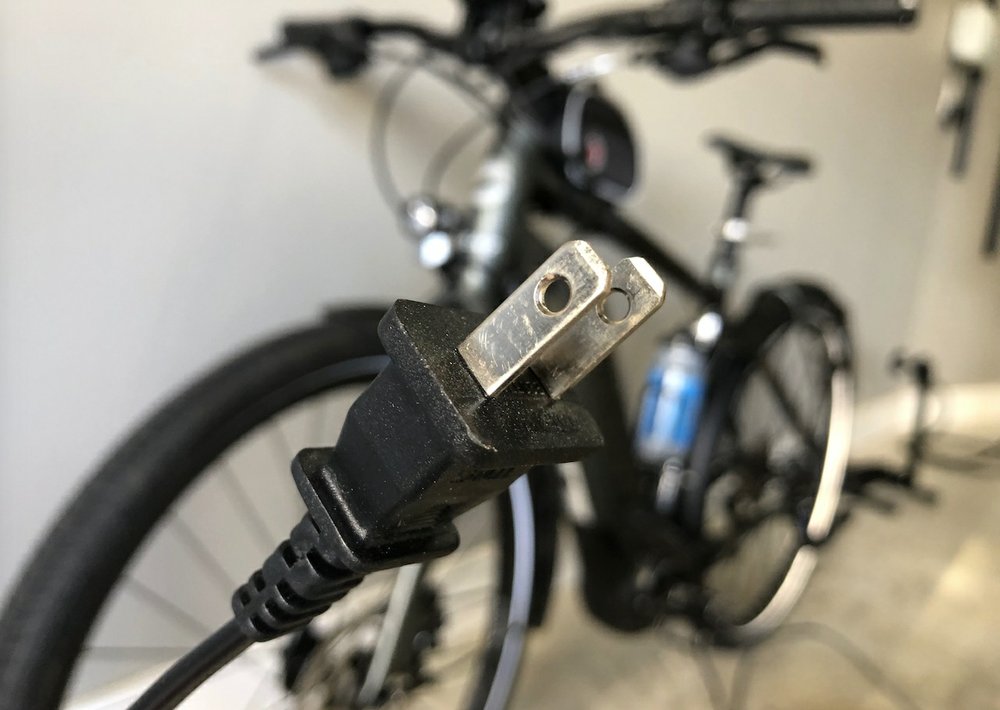 The electric Giant bicycles owned by Regina Seelinger plugs into a recharger that plugs into the wall of her garage. (Arkansas Democrat-Gazette/CELIA STOREY)

Mat Seelinger is a partner in the Giant Little Rock bike shop, where e-bikes occupy space on his sales floor next to traditional rides.

"The technology is finally coming around to where they look like normal bikes now," he says. "For so long, you would say, 'Oh, that's an e-bike. It's got this big, honkin' battery stuck on the back of it and it looks like a frankenbike.' Now they're incorporating all this stuff into a really streamlined, normal-looking bike.

"If you didn't really study it, and it went by you, you wouldn't know it was an e-bike."

Modern e-bikes often feature a battery integrated in the frame, with the motor generally located in the bottom bracket area of the frame or in the hub of one of the wheels. They are pedal-assist, which means the cyclist starts pedaling and the motor kicks in to help propel the bike — the harder you pedal, the faster you go.

Most come with a switch that lets the rider shift through different modes of assistance. These machines have little screens that show battery life, speed and other data. Depending one the mode, terrain and how much the rider pedals, a charge can last 100 miles or so, Seelinger says, adding that it takes about four hours to completely charge a battery.

A quick spin on a Giant ToughRoad E+GX bike in the parking lot behind the store is a revelation. It's heavier than a regular bike, for one thing, but the weight isn't that noticeable once you start pedaling and the assist kicks in. Pedaling becomes much easier, although there is still some effort. It's like riding with a really strong tailwind.

In Arkansas, Class 1 and 2 e-bikes are legal on multi-use paths like the Arkansas River Trail and the Razorback Greenway.

Seelinger says some of his customers use their e-bikes as a sort of equalizer.

"I've seen older customers who want to ride longer distances, and also ride with younger people they might have trouble keeping up with otherwise," he says.

His 78-year-old father, Charles Seelinger, is one such rider. "He'd ridden before. We would go out and he had trouble on the hills, trouble keeping up at faster paces," Mat Seelinger says. "We put him on an e-bike, and he and I can ride anywhere together." 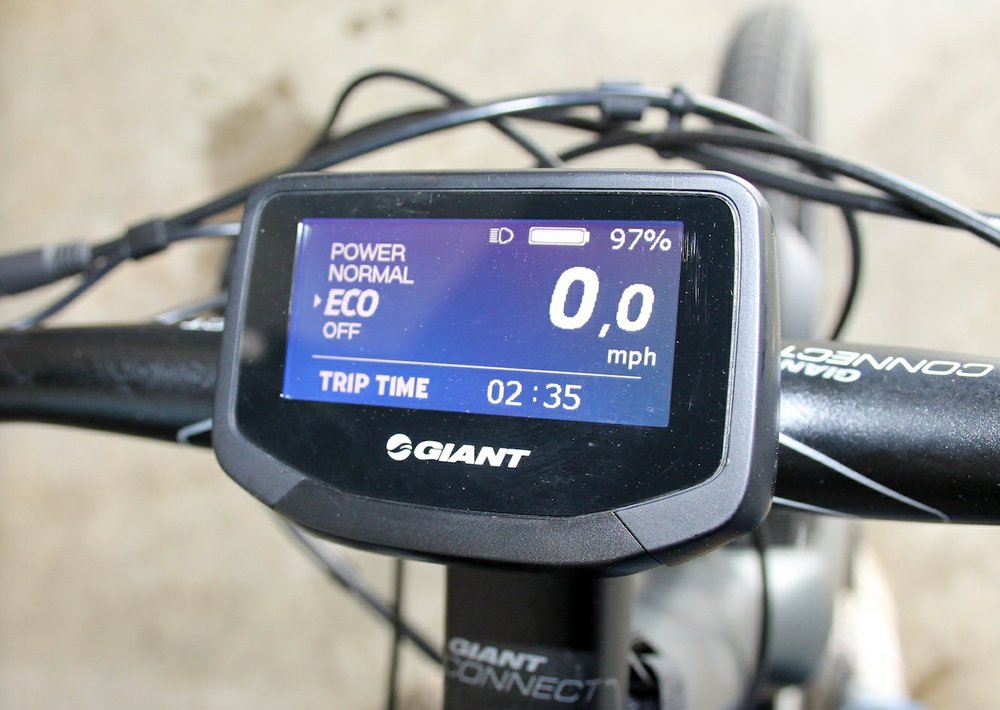 The same goes for Mat Seelinger's wife, Regina, who has a Giant Quick E+ model and uses it to tow her grandchildren around.

"We can put a trailer with two grandkids in it behind her bike and she can ride," Seelinger says.

There is the nagging perception among purists that e-bikes are the recreational cyclists' version of being doped up. If a bike has a motor in it, then the rider must not be doing any work, right?

Not so, says Todd Henne of Danville, who has a pair of Specialized off-road e-bikes among his well-stocked fleet of bicycles.

"They're pedal-assist. You have to pedal," he says of his e-bikes. "You get off and still think you had a good workout."

An e-bike, he says, is just another example of technology being adapted to make riding more efficient.

Early mountain bikes, for instance, were big and clunky. Now even entry level models are pretty light, can have intricate suspension systems, hydraulic disc brakes and a wide range of gears. Reincarnate one of those early bikes, and there would be glaring differences between it and its sleek, modern descendant in appearance and ride quality.

Regina Seelinger says if anyone feels the need for a heavy-duty leg workout, they could turn off the motor. To be race-legal under Union Cycliste Internationale rules, a road bike must weigh at least 15 pounds. Her e-bike weighs 52 pounds.

Meanwhile her husband acknowledges that for some cyclists, seeing an e-bike zip past as they are pedaling furiously without help from a motor might get their spokes bent out of shape: "A lot of people feel like it's not fair that they're working as hard as they are and someone comes flying by them on one of these bikes."

E-bikes aren't meant to crush fragile, Lycra-wrapped egos. They're just another gateway to get people pedaling.

"The highlight of my time on an e-bike was watching my 80-year-old father get on one and get to experience what we experience on a normal bike," Henne says. "He had a ball. Every time we turned around he was putting a helmet on and jumping on that e-bike."

Frank Webber, then-operations manager at Orbea USA in North Little Rock, acknowledged during an interview in October that with the "e" comes a stigma.

"I really think that people have to just wrap their heads around the fact that maybe it's not for them, but that doesn't mean it's bad," he says.

Webber, who raced mountain bikes, admits he was opposed to pedal-assist off-road machines at first.

"I thought they would do damage to trails, and I held on to that whole 'cheating' aspect."

A pair of rides with his boss, who visited Arkansas from Orbea's Spanish headquarters, changed his mind.

"We had a miserable time," Webber says of the first ride. "He wasn't in shape well enough to ride, and I had to slow down and wait. It wasn't a great experience for either of us."

They were both on e-bikes the next time they rode together, and it was much more pleasant.

"That's when it clicked for me," Webber says. "This isn't for me right now, but there are plenty of people who could use these to enjoy cycling." 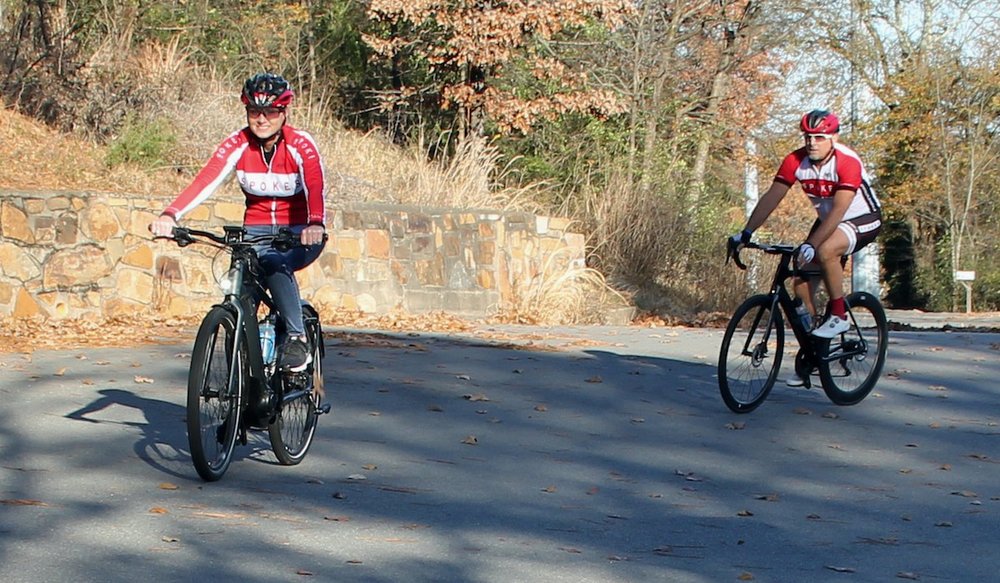 Regina Seelinger and her husband, Mat, ride uphill toward Fort Roots in North Little Rock. Regina is on her electric bike, which makes riding up hills much easier. (Arkansas Democrat-Gazette/SEAN CLANCY)

As for damage to trails, Webber says there have been studies that show e-bikes do no more harm than their motor-free cousins.

Speaking of trails, however, off-road e-bikes are banned from U.S. Forest Service land — which is where some of Arkansas' most famous mountain bike routes — like the Womble Trail at Mount Ida and parts of the Ouachita National Recreation Trail — can be found. They're also not allowed on mountain bike trails in Arkansas State Parks, but that might change.

"We have a new park directive that has to be approved by the Legislature that would allow Class 1 pedal-assist bicycles on any trails that we now allow bikes on," says Joe Jacobs, marketing and revenue manager at Arkansas State Parks.

The directive should receive a vote in early 2019, he says.

John Owens, president and CEO of the North Little Rock Chamber of Commerce, is an avid e-biker and often rides on the Arkansas River Trail.

"I bought mine about a year ago," the 62-year-old says of his bike with its Yamaha electric motor. "I've ridden all my life, and as I've gotten older it's become a little more challenging."

A hip-replacement surgery made riding longer distances difficult, so he looked into an e-bike.

"It makes the whole experience more pleasurable," he says. "It's like the first time you ever rode a bicycle. You just get a smile on your face."

Webber used an e-bike for commuting when he worked at Orbea.

Projected to open in spring 2019, the service would allow anyone to pay a small fee to borrow a bicycle from vending stations; the service would be managed by a turnkey bike-share provider. The city began accepting proposals Nov. 20; two service providers met the Dec. 11 deadline. Landosky says the city is assembling a panel to assess those bids.

Bike-share will be a transportation alternative rather than just a tourist amenity, he says. He hopes that part of the fleet will be e-bikes.

"People will sometimes not want to ride a bike when it's too hot, because they don't want to exert themselves in the heat," he says. "E-bikes can help break down that barrier. Hills are also a barrier for some people. We want to try to make it an equitable program, and that's why e-bikes are attractive to us."