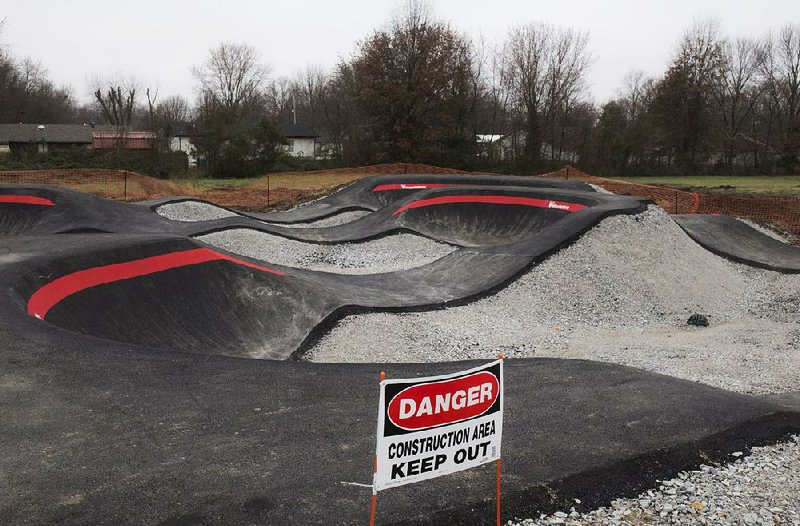 A new pump track will serve as the centerpiece of what eventually will be a mile-long bike skills trail on the east side of the Thaden School in Bentonville. - Photo by Charlie Kaijo

BENTONVILLE -- A school that has made bikes one of the hallmarks of its curriculum sits in the middle of a city that has embraced the culture of cycling.

The Thaden School's commitment to bicycles shows up inside the classroom where students learn such things as the design and mechanics of a bicycle and how to take one apart. Outside, a top-of-the-line pump track shines as the centerpiece of what will be a mile-long bike skills trail looping the east side of campus.

A pump track is a continuous circuit of banked turns and features designed to be ridden with little or no pedaling. Riders create momentum through up and down body movements called "pumping."

Most pump tracks are built from soil. Thaden's pump track, designed by Velosolutions, is paved with asphalt, making it the first of its kind at a school in the United States, according to Alon Karpman, chief executive officer of Velosolutions USA.

"It's got kind of a center stage in the middle and room for everyone below to listen to the lesson, then have fun on the track and learn the basic skills," Karpman said.

Velosolutions' mission is to expose everyone to biking and the outdoors. Its design philosophy is to craft each track for everyone from novices to pros, he said.

Velosolutions also built the pump track at The Jones Center in Springdale, which hosted this year's Red Bull World Pump Track Championships in October. Velosolutions has built about 15 tracks in the United States and more than 150 worldwide, Karpman said.

The Walton Family Foundation, which helped pay for The Jones Center's bike skills park with a $1.1 million grant, is also the organization that backed the development of Thaden School.

Thaden's track was built in about 10 days in late November, though some landscaping work remains to be done to fill in the gaps between the track's loops.

Richard Drew, a professional rider who owns a business teaching mountain biking skills, is Thaden's cycling coach. Velosolutions is the benchmark in pump tracks, he said.

"It's incredible for Thaden to be the first school in North America to have one of those Velosolutions pump tracks," Drew said. "It speaks to the progressive nature of the school and what they want to accomplish."

Not all students will become professional mountain bikers, but learning to handle a bike will expose them to the various benefits that come with physical fitness and being outdoors, he said. Plus, he said, it's possible on bike trails to meet all kinds of people whom you might not otherwise come across.

"So all of these walls break down," Drew said.

Students are looking forward to using the track.

"Oh, that's really cool," said Abby Durkin, a Thaden ninth-grader, when asked about it. "I hope I get to ride on it, even though I'm not that good at biking."

Lisa Herschbach, Thaden's director of finance and operations, said it was interesting to watch workers paint the red lines that guide riders.

"They rode every ramp over and over and over again," Herschbach said. "They had it all taped out and then, as they rode and kind of gauged what it felt like to go around each curve, they were adjusting the masking tape."

Clayton Marsh, head of the school, declined to disclose project costs. He said the school expects to make the pump track and bike trails accessible to the public once the dust settles on the project.

Thaden offers three signature programs: one about bicycles, one about film and one about food, referred to as "Wheels, Reels and Meals." Students rotate through the programs, engaging in one per trimester.

The pump track is an important piece of Thaden's Wheels program, but Marsh said it offers a place to teach more than just physical education.

"Students who have a chance to internalize the motions of a bike often bring a greater grasp to momentum, motion and velocity, and ways that can help them in their physics classes," Marsh said. "So we see this as another classroom."

Thaden School is private and opened in August 2017. Annual tuition is $24,600 per year for middle school students and $25,800 for high school students, though the school offers an indexed tuition, which takes into account a family's ability to pay.

Enrollment grew from 48 last year in grades seven and nine to 110 students in grades seven through 10 this school year. Enrollment is expected to more than double again next fall, when new classes of sixth and seventh grades are welcomed in, Marsh said.

Students attend classes in portable buildings, but that will change. Construction is underway on the former site of the Benton County Fairgrounds, with the first permanent buildings scheduled to open next fall.

Most of Thaden's students come from Benton County. Nearly 30 percent come from Washington County, with some coming from West Fork.