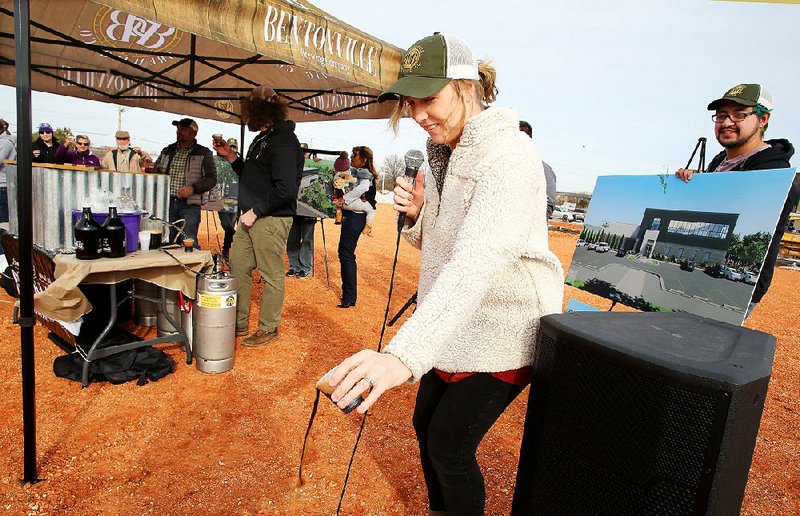 Katie Boykin, chief executive officer of Bentonville Brewing Co., pours out a bit of beer during a recent barrel-signing party at the site that will be the brewery’s new location.

BENTONVILLE -- Beer-maker, Bentonville Brewing Co., is building new digs and plans to be back in Bentonville by next fall.

Last week, well-wishers and beer lovers signed a wooden barrel at the site of the brewery's new home at 901 SW 14th St. Plans are to fill the barrel with the brewery's signature Deliverance Imperial Stout and crack the keg when the new location opens in October, with those signing the barrel getting first dibs to sip the suds.

"We're going to let it age until this place is built," head brewer Beau Boykin told the group recently on a windy afternoon.

Bentonville Brewing Co. started out in 2015 but soon ran out of space and moved its operation to nearby Rogers in 2017. Now the company is eager to return to Bentonville and is building its new home to include a taproom, biergarten, dog park, playground, a space for food trucks and greatly enhanced production capacity.

According to records from the state's Alcoholic Beverage Control Division, Bentonville Brewing produced 761 barrels of beer in 2017. Statewide, beer-makers produced 1,214,779 gallons of beer, or 39,186 barrels, in 2017, up 37 percent from the previous year. That total comes from 31 active small-brewery permits and 16 microbrewery restaurant permits, according to the documents.

Lee Robinson, managing partner at Bentonville Brewing said plans are for the company to remain a small regional brewer, but the new location eventually will have the capability to produce 10,000 barrels annually.

A barrel of beer equals 31 gallons. Today, Bentonville Brewing Co. distributes its beer in kegs to about 120 locations in Northwest Arkansas and sells its beer in bottles in about 60 retail locations.

Boykin, the brewer, said the additional capacity will allow the company to offer more varieties of beer to its customers and give him the freedom to experiment more with its offerings.

In 2017, the total value of craft beer sold in the U.S. stood at $26 billion, according to data from the Brewers Association. That represents an 8 percent growth over 2016. For 2017, total beer sales were down 1 percent, but craft beer saw a 5 percent volume increase for the period and represented 12.7 percent of all beer production.

"Too small and you quickly run out of room to expand. Too large and you're paying for space you don't need," Watson wrote in response to emailed questions. "Any move is going to require challenges and costs in getting the new system up and running."

Katie Boykin, managing partner and CEO of the brewery, told the crowd that the company always intended to make its way back to Bentonville, and it is eager to call the city home again.

"We're so excited to be back," she said.