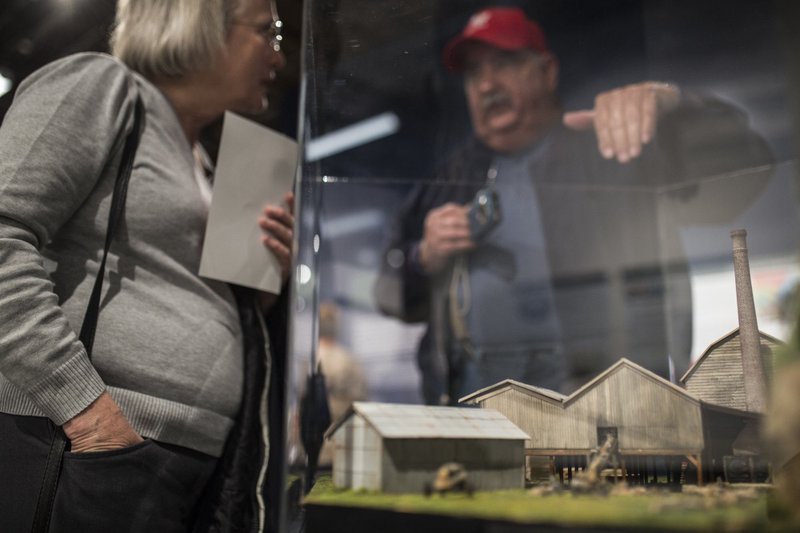 NWA Democrat-Gazette/CHARLIE KAIJO Sam Syzdek (right) talks Thursday to Allyn Lord, director of the Shiloh Museum, about a Van Winkle Mill replica he built during an opening at the Rogers Historical Museum. The museum had an opening after moving to the former Hailey Ford/Rogers Morning News building.

ROGERS -- The Rogers Historical Museum opened Thursday in its new spot downtown with the help of some key supporters.

"This is the beginning of another road. We're going to live up to the promise we made that we're going to do more for the people of Northwest Arkansas, and that was the purpose of this all along," said John Burroughs, museum director.

The Rogers Historical Museum, 313 S. Second St. in Rogers, is open 10 a.m. to 5 p.m. Monday through Saturday. Admission is free.

Exhibits are now housed at the newly renovated Hailey Ford/Rogers Morning News building at 313 S. Second St., where the museum hosted an opening ceremony Thursday. The museum first opened in 1975 in a rented 1905 former bank building. The Harold Hawkins family donated the 1895 Hawkins House on South Second Street seven years later, and an addition was completed in 1987. Efforts to expand again began in 2006, and the Hailey Ford/Rogers Morning News building became available in 2015 when Northwest Arkansas Newspapers closed its Rogers office. Northwest Arkansas Newspapers is the parent company of the Northwest Arkansas Democrat-Gazette.

Burroughs said the museum will be an active part of the community, not just a place to go when Rogers residents have family in town and need something to do.

"This has been a wonderful public/private partnership," he said.

Several people donated money to the museum. The museum also received two grants from the Walton Family Foundation: $480,000 for design and about $970,000 for construction. The museum was one of three projects selected to pilot the foundation's design excellence program.

Jeremy Pate of the foundation said of the 11 projects that have received design excellence grants, the Rogers Historical Museum is the first to be completed.

Design architect Roberto de Leon said the project has been a labor of love.

Dickerson has been on the commission for more than 41 years. She said many mayors, City Council members, volunteers and staff members have worked together over the years on this project.

"Every staff member here has done anything and everything to get items across the street, items in place, dust bunnies chased. You name it, they've worked on it," Dickerson said. "And the staff and volunteers and John, all of you are to be commended for what you have done to give us our museum because now the city of Rogers has a jewel in its crown and our museum has a home."

Mayor Greg Hines said the museum is part of the overall re-invention of downtown Rogers. He noted the city received another design excellence grant to renovate Frisco Park in downtown. The city plans to rename Frisco Park to Railyard Park and begin renovation next year to include amenities such as a new stage. 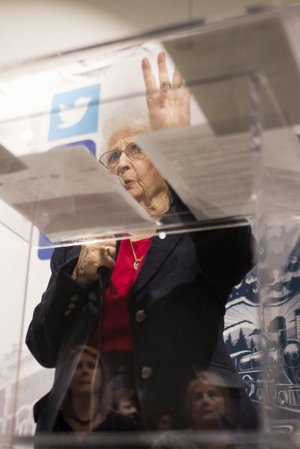 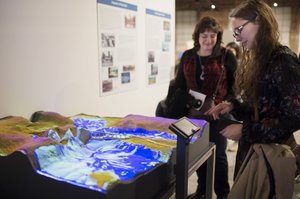 NWA Democrat-Gazette/CHARLIE KAIJO Emilee Dehmer of Nashville, Tenn., looks at a topographic model of the Arkansas 12 bridge over Beaver Lake during a an opening Thursday at the Rogers Historical Museum.