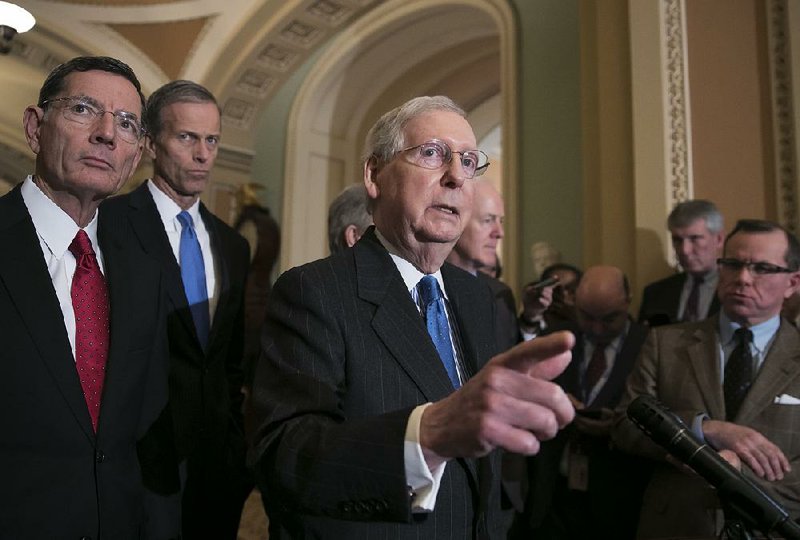 WASHINGTON -- The United States Senate on Tuesday approved a new farm bill, legislation that would guide the country's agriculture and nutrition policy over the next five years.

The House is expected to back the measure later this week.

Farmers and anti-hunger advocates had urged lawmakers to support the measure.

At the White House on Tuesday, President Donald Trump voiced support for the legislation, telling reporters: "We think the farm bill is in very good shape. A lot of good things are happening with it, and our farmers are well taken care of."

The farm bill is typically renewed every five years or so. Key provisions of the existing law expired Sept. 30.

After more than two months of uncertainty, Arkansas farmers and ranchers are relieved to see the legislation back on track.

"There's a lot of good things in it that we were looking for and wanted in there. It's pretty much a continuation of a lot of things that was in the 2014 farm bill. So when you put all that together, it's one that we can support," said Arkansas Farm Bureau President Randy Veach.

With agriculture, there are always potential hazards, Veach said.

"It can be trade, it can be weather and it can be prices," and the farm bill provides a safety net, he said.

Boozman said it's important to proceed with the farm bill.

"All of the commodity prices are very very low. [Farmers] have higher overhead. ... Bankruptcies have doubled in the last couple of years in the Midwest and suicides are up over 30 percent the last couple of years, so it's really a very difficult situation for our farmers and ranchers," Boozman said. "What passing the farm bill will do is give them the security they need so that they can go to their bank and get the loans that they need going into the next growing season which is right upon us."

Cotton said he opposed the bill because of the budgeted food aid, popularly called food stamps.

"While the farm bill has many important provisions for Arkansas' farmers and ranchers and foresters, I was very disappointed at the lack of meaningful food stamp reform. Forty million Americans are using food stamps today at a time when we have booming economic growth. In 2009, at the depths of the last recession, only 33 million Americans were using food stamps. One reason is we won't even ask grown men without kids to get a job or even do job training or volunteer work. I think Arkansas taxpayers deserve better than that," he said.

According to the website for the U.S. Department of Agriculture's Food and Nutrition Service: "Generally, able-bodied adults aged 18 to 50 who do not have children and are not pregnant can only get SNAP benefits for 3 months in a 3-year period unless they are working or participating in a work or workfare program."

After the House and the Senate passed competing versions of the legislation, a conference committee was appointed to craft a compromise version.

The three Arkansans serving on the committee, Boozman, U.S. Rep. Bruce Westerman of Hot Springs and U.S. Rep. Rick Crawford of Jonesboro, all signed onto the 807-page conference report, which laid out the terms of the compromise.

Crawford said a flawed farm bill was better than no farm bill at all.

"Obviously it's not perfect. It's not exactly what we wanted in the House, but we got quite a bit of what we asked for. I think, really taken as a whole, this is a good step forward," Crawford said.

The legislation ensures that we're "doing the right thing to provide a level of support for those individuals who grow our food" while ensuring that nutrition programs are "maintained and sustained in a responsible way."

Westerman said delaying a vote to next year, when Democrats control the House, would probably be counterproductive.

"We can either get this farm bill passed or get one which I don't think would be nearly as good next Congress. I'm ready to move forward with this one," he said.

The compromise will be good for Arkansans who till the soil, he predicted.

"It will allow farmers to plan for next year. It will give stability," Westerman said.