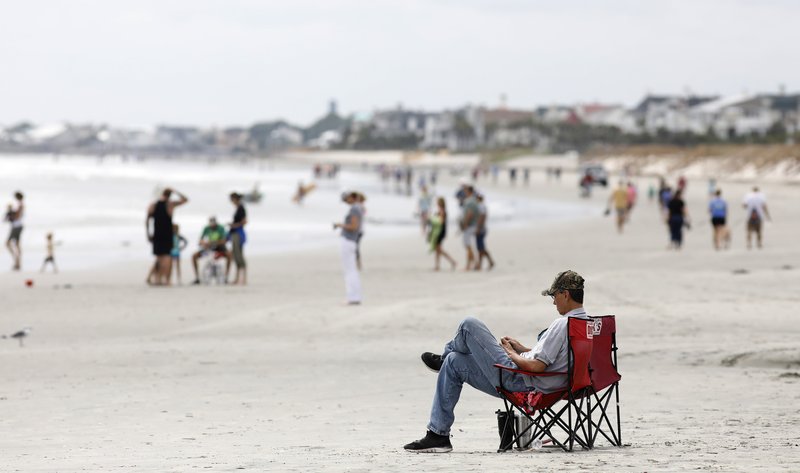 In this Sept. 13, 2018, file photo, beach goers hang out at the Isle of Palms, S.C., as Hurricane Florence spins out in the Atlantic ocean. Environmental groups plan to sue the Trump administration over offshore drilling tests, launching a legal fight against a proposal that has drawn bipartisan opposition along the Atlantic Coast, two people with direct knowledge of the pending litigation told The Associated Press on Monday, Dec. 10. (AP Photo/Mic Smith, File)

HOUSTON -- The oil industry is investing more, not less, in U.S. shale after the recent tumble in crude prices.

It's a far cry from four years ago when OPEC declared war on American shale areas, which at the time had some of the highest costs anywhere in the world and were often the first on the chopping block during tough times.

The cost of shale production has fallen so much since then that it's becoming a haven for major oil companies in times of volatile prices, providing rapid, reliable growth and quick returns even with crude trading for just over $50 a barrel, down by almost a third since the start of October.

The U.S. shale sector has helped boost American production to an average of 10.9 million barrels a day this year, the most on record. Output is forecast to grow a further 11 percent next year, according the Energy Information Administration.

ConocoPhillips said Monday that it's spending half its 2019 budget in the continental U.S., while Chevron Corp. is investing more at home than it's done for more than a decade, with $3.6 billion going to the Permian Basin alone. Anadarko Petroleum Corp. and Hess Corp., both global operators, plan to increase spending on their American assets more than 40 percent.

TOKYO -- A Tokyo court ruled Tuesday that Nissan Motor Co.'s former chairman, Carlos Ghosn, and another executive will remain in custody through Dec. 20, more than a month after their arrest.

The Tokyo District Court said Tuesday that it had rejected a protest filed by Ghosn's lawyer against the prolonged detention. No trial date has been set, as is routine in Japan.

The court decision comes a day after Ghosn, Nissan executive Greg Kelly and Nissan Motor were charged with violating financial laws by underreporting Ghosn's pay by about $44 million in 2011-2015. They were arrested on Nov. 19 and are being held at a Tokyo detention center.

The extension of their detention is to allow time for investigation into additional allegations that prosecutors issued Monday against Ghosn and Kelly of underreporting another $36 million in 2016-2018.

The real estate market has cooled this year as higher borrowing costs cut into affordability for buyers already facing steadily rising values. Builders often try other methods to drive sales first, such as discounting upgrades or buying down mortgage rates. They avoid lowering asking prices because of the potential that cuts may alarm buyers and anger customers who paid more for homes in the same community.

On average, builders said they lowered prices by about 4 percent, Dietz said.

"Price incentives are relatively small," he said. "But they are still there and growing."

The Charlotte Observer reported that Cato Corp. has agreed to pay $3.5 million to settle with the U.S. Equal Employment Opportunity Commission. The agency announced Monday that the Charlotte-based company denied reasonable accommodations for those workers and made some workers take unpaid leave or terminated them because of disabilities.

The agency said Cato's practices violated the Americans with Disabilities Act and the Civil Rights Act of 1964. It said in a release that Cato has agreed to update its policies to prevent discrimination against those workers.

The lawsuit filed in federal court in Charleston, S.C., alleges the National Marine Fisheries Service violated the Marine Mammal Protection Act, the Endangered Species Act and the National Environmental Policy Act when it issued five permits for the use of seismic air guns.

The blasts are conducted in preparation for potential offshore drilling, which the administration has proposed to expand. The five-year plan would open 90 percent of the nation's offshore reserves to private development.

Environmental groups say the blasts can disturb or even harm marine creatures.

ROUND ROCK, Texas -- Dell Technologies Inc. won a shareholder vote to return to public markets, putting founder Michael Dell on the winning side of a transaction that polarized investors for the second time in five years.

Under the terms of the deal, Dell will buy out shareholders of the stock that tracks Dell's stake in software maker VMware Inc., known by its ticker DVMT, for $23.9 billion worth of cash and shares. The Round Rock, Texas-based computer giant said it will list on the New York Stock Exchange as soon as Dec. 28 under the ticker DELL.

After going private in one of the biggest leveraged buyouts ever, Dell said it will re-list as a financially stronger company, though more burdened by debt. The move will help simplify a tangled corporate structure that holds together a tech empire ranging from servers to security software and give the company greater flexibility to raise capital, boost its value and pursue stock-based acquisitions.