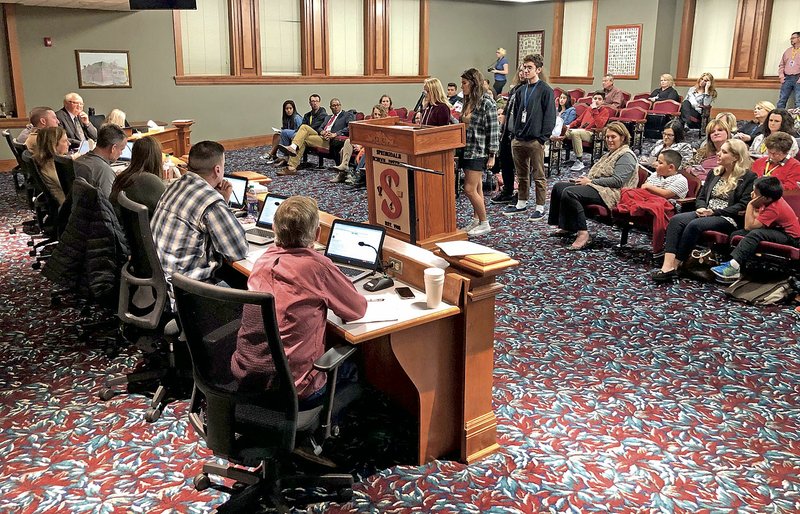 NWA Democrat-Gazette/ANDY SHUPE Members of the staffs of the Har-Ber Herald, the student newspaper at Har-Ber High School, and the school's yearbook, speak Tuesday, Dec. 11, 2018, to the Springdale School Board during a public comment portion of the Board's meeting in Springdale.

SPRINGDALE -- Students representing Har-Ber High School's newspaper and yearbook took an opportunity at Tuesday's School Board meeting to criticize administrative involvement in what they publish.

Tuesday's board meeting was the first since news broke this month the School District ordered two articles be removed from the website of the Har-Ber Herald newspaper.

The district announced Dec. 4 it would allow both pieces -- a news article and an editorial concerning the transfers of several football players from Har-Ber to Springdale High School last year -- to be reposted.

Madelyn Stout, editor of the yearbook, and Halle Roberts, editor of the Herald, addressed the board with their concerns the district will institute a policy whereby all future publications must be reviewed by an administrator prior to publication.

Roberts was adamant she and the Herald staff stand by their reporting about the student transfers.

"Nobody said journalism was going to be easy, and we're learning that at a very young age," Roberts said. "So honestly, I thank you for giving us this experience because we have been taught there's always going to be someone saying, 'This is wrong, you're wrong, be quiet,' when we know that we are right and we have learned to go at this in a professional light."

Having to submit to administrators' review would make their work more difficult because the student journalists will have to meet a stricter deadline to get their work approved, she said.

"But also, it takes away our learning experiences for our careers, because we're not going to have to do this in the real world," Roberts said. "There's not going to be someone standing over us saying, 'Well, that might hurt someone's feelings, we can't put that in the press.'"

Brian Wood, an attorney representing teacher Karla Sprague, who serves as staff adviser to the Herald, has said there's never been a practice of prior review for Har-Ber High School publications. Sprague received a reprimand for not obeying a request to show Har-Ber's principal the Oct. 30 edition of the Herald before it went to print, according to Wood.

The two articles were removed from the Herald's website Nov. 2.

Stout said administrators may have tried to suppress the Herald's story, but "in doing this, you went from being the protector of the journalists at Har-Ber to our bully and to our censor."

Prior review jeopardizes the students' journalistic integrity and isn't how it works in the real world, Stout said. She added the yearbook also will face added pressure because of stricter deadlines if prior review is enacted.

"It's frustrating the administration clearly can't grasp how much work and tears me and my staff have put into this book so far, and now we feel as if they have the audacity to say our work needs to be reviewed before it can be published," Stout said.

Kevin Ownbey, board president, thanked the students and said he appreciated them for having the courage to show up and address the board and administrators. Superintendent Jim Rollins and board members gave the students a round of applause, but didn't otherwise address the issue during the meeting.

After the meeting Rollins called the journalism students "phenomenal young people." He said he understood their perspective.

"They are great kids with a passion and commitment to what they're doing," Rollins said. "On the other hand, from my chair, I have to be focused on bringing services forward that benefit all children and respect all children, including those young people who actually penned the articles. Every child in this district is important. And we've tried to operate our school system with that in mind."

A committee consisting largely of journalism teachers is working on a policy to address how student publications are handled, he said.

"I don't have a role to play in that, but I'm looking forward to the recommendations our journalism teachers will bring forward," Rollins said.